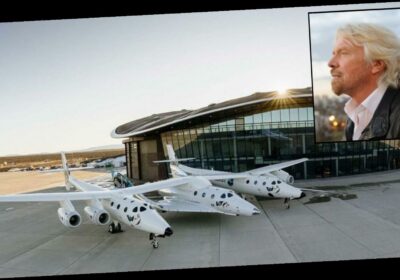 British billionaire, Sir Richard Branson,  has quite the impressive portfolio of professional pursuits. With a career spanning over 5 decades, the 70-year-old businessman founded the Virgin Group in 1971. Today, the Virgin Group has over 40 different subsidiaries, with major channels in the travel, fashion, and entertainment industries. In 2004, Branson established Virgin Galactic, a commercial spacecraft division of the Virgin Group, aiming to bring regular civilians on space exploration journeys. Space travel and space vacationing are a huge focus in our generations version of a ‘space race’. People are beginning to show much more interest in exploring the cosmos, with SpaceX founder Elon Musk not backing down from his mission to colonize Mars.

In 2004, Richard Branson established his spacecraft company, Virgin Galactic, with the intent of eventually providing space journeys to regular citizens with no requirement of having NASA training. He also established The Spaceship Company (TSC) around the same time. TSC’s main venture is the design and construction of commercial spacecrafts and aircrafts.  Though Branson and Virgin Galactic have been eager to get their fleet into space, so far, there have been no launches planned. Every year from 2004, the company has said that they were roughly a year away from a successful passenger flight, according to CNN Business.  Though Branson continues to show optimism about an upcoming launch later this year, it’s not clear whether or not the spacecraft will be safely approved for passenger takeoff.

In 2017, Branson added another space-related company to his collection. Virgin Orbit is a satellite rocket launching venture, which celebrated it’s very first successful space orbit on January 17th, 2021, when the LauncherOne rocket reached Low Earth Orbit, according to Bloomberg. The satellite successfully released 10 CubeSats (miniature satellites) into orbit. While this was a big win for the Virgin Group, there have still been no confirmed dates for civilian flights with Virgin Galactic. More satellite launches are likely to be completed before Galactic has everything in place to send civilians on joy rides to space!

Branson Promises To Go To Space

While billionaire funded space companies are in no shortage, Richard Branson has personally promised to go into space himself before allowing civilian tourists to embark on one of Virgin Galactic’s ships. This is one thing that sets him apart from Elon Musk of SpaceX, and Jeff Bezos of Blue Origin. The confidence he has in his spacecrafts is definitely going to be a selling point when people are actually able to procure tickets to go into space. Seeing the founder of a spacecraft company take the first ride into space will give a certain level of endorsement to the Virgin fleet. Branson, at 70 years old, might end up being the oldest person to go to space, if the Galactic maiden journey is successful in the next few years!

Plans To Send Tourists To Space Every 32 Hours By 2023

Civilian space travel is definitely one of the biggest themes of the 21st Century, with the race to get members of the general public into space is at the forefront of several companies’ agendas. SpaceX, Blue Origin, and Virgin Galactic have all made promises of getting people launched in the coming year or two, although, space travel dates are often delayed (and sometimes by several years, or even decades!). Galactic’s passenger vessel, the VSS Unity (also coined, SpaceShipTwo) aims to offer regular launches of 6 passengers at a time by 2023. The 90 minute ride will cost a cool $250,000 per ticket.  With a fleet of 5 spacecrafts in anticipation, Galactic plans to schedule in 270 flights per year, by 2023.

Their initial goal of having 16 flights in 2020 was not reached, so these dates are most certainly going to be delayed, as well. The mission has been backed by a very interested fanbase, who have fundraised over $800 million for the company, according to Business Insider.

Over 600 people have already secured tickets to be space tourists, including actor, Ashton Kutcher. Space travel for civilians is definitely a huge point of interest to so many. The world is eagerly watching to see which space travel company will be the first to send civilians to space for leisure explorative journeys. The initial launches will probably be nerve-wracking, but in the near future, space journeys will probably become just as common as hopping on a plane to go to a different country for vacation. Though not everyone is eager to take the risk of going into space, for some, it signifies the trip of a lifetime.

The race is on, and time will tell which space company will have success first!