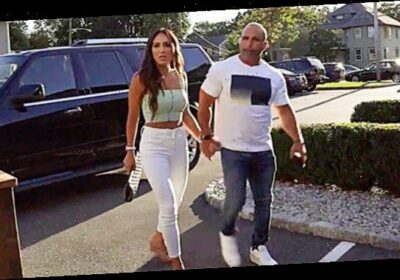 The March 10 episode of ‘RHONJ’ delivered viewers with yet another rumor about one of its longtime stars, and this time, the target was on Joe Gorga’s back.

Jennifer Aydin delivered some devastating news to Melissa Gorga during the March 10 episode of The Real Housewives of New Jersey. Just before their final night in Lake George, Jennifer took Melissa aside and told her that Teresa Giudice‘s realtor Michelle Pais was telling people that Joe Gorga owes her husband a lot of money — “tens of thousands” to be exact. Fortunately, Melissa didn’t kill the messenger, but she did confront Teresa over the startling new rumor.

So how did Teresa take it? In the words of RHONY alum Dorinda Medley, “not well, bitch“. Teresa played dumb and said Michelle never said anything to her about the alleged money issue, and even if Michelle was telling people that, Teresa didn’t really care. She just kept saying how great of a realtor Michelle is, and she’d overlook anything Michelle said for the sake of having a good realtor sell her house. Melissa couldn’t believe what she was hearing, and neither could we. (Actually, we could — this is Teresa after all.)

Anyway, Teresa later confronted Michelle when she brought her team by the house to take some photos and shoot some videos. Teresa asked her to have her husband work things out with Joe — she also said that until they do, she wouldn’t allow Michelle to list her house. Michelle said she understood and would make it happen. So kudos to Teresa for somewhat defending her brother, but we’ll see how that one pans out.

Especially because when Melissa called Joe and asked him about the rumor, he said he didn’t owe Michelle’s husband anything. Instead, he said that Michelle’s husband joined him on a business venture and once he saw it becoming “successful” he seemed to want a bigger piece of the pie. Still, Joe said he and Michelle’s husband never made any deal to split the money that was made from it.

Later, after the ladies returned home, Jackie asked everyone — minus Teresa — to come together again and give Evan a birthday party redo. Then, as they all arrived, she asked each and everyone of them to tell Evan they didn’t believe the cheating rumor that Teresa had been spreading. Basically, she wanted to know who truly has her back in all of this. It felt forced and looked super awkward, but if that’s what helps Jackie sleep at night, then so be it. It was also funny, though, because just last week, Margaret Josephs‘ husband Joe said he heard Evan had a girlfriend on the side, but this week, he flat out said he didn’t believe Teresa’s rumor. We suppose that’ll have to wait to be discussed until the reunion. Sigh.

Some other tidbits: Margaret revealed she once slept with her boss after feeling pressured to hook up with him, and Jackie got upset when Margaret tried brushing off Teresa’s recent actions.