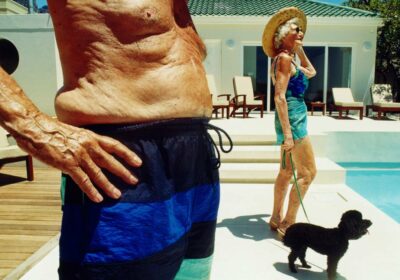 Artist Rob McGregor, 81, has run more than 100,000km in his lifetime and still walks up Mount Maunganui or “Mauao” regularly.

But right now, he’s “running around” on crutches waiting on his second hip replacement.

“Apart from that, I’m very well for my age, but I always have been,” he says.

He was a sporty child from a sporty family, and though always in competitive sports, only took athletics seriously when nearly 40, competing in everything “from running 100m to marathons, and throwing javelin”.

He was 58 when he did his first decathlon and pole vault, and became the best in his age group in New Zealand, competing in the world championships at 65 and placing fourth.

He still tutors art classes, enjoys playing and listening to music, is keen on chess, and devours a couple of books every three days.

Wealth isn’t important, he says, but not having to worry about money is.

Genetics, diet, a wide range of interests, new challenges so that you can continue learning, and happiness, are what he attributes to ageing well, and he is one of many in our population doing so.

Research from Massey University’s Health and Ageing Research Team shows how well you age depends on the type of childhood you had and your wealth.

They have an ongoing study on ageing, called The New Zealand Health, Work and Retirement Longitudinal Study, which is Government funded and helps with policymaking.

Sixty per cent of that group entered as healthy or “robust”, whereas a “vulnerable” 10 per cent showed researchers if you start off with poor circumstances as a child, you’re likely to be unhealthy as an older adult.

“It’s about a lifetime of health effects. Your life before age 55 is the greatest predictor of how well you will age.”

He’s been working out since he was 14 and, now 51, gives some of his clients in their 20s a run for their money.

He hasn’t had a cold in years, weight trains four days a week, runs for 45 minutes on a Wednesday night, and spends his weekends fishing and diving, which is a continuum of the healthy and happy lifestyle he’s lived since a child when he built tree huts and went motorbike riding.

While his father was “very wealthy”, he was, however, raised by his single mother, who wasn’t. They initially lived in a state house.

She worked hard and at 76, owns her own home and small business, as he does, and is fit and healthy.

“The level of wealth being the biggest predictor of a happy outcome, doesn’t stand true for us,” he says, but overall, he did have a “very good childhood”.

Although his mother was not well off, she had good housing support from the state and was able to develop her own business.

“His childhood enabled him to remain active and engaged and follow his parents’ model of hard work and business success,” Stephens says.

If people don’t have good childhoods – which includes adequate housing and finances – they’re more likely to become unwell as they become older, she says.

“Your level of socio-economic status is the biggest predictor of every happy outcome in older age.”

Home ownership, your neighbourhood and relationships with neighbours, also play a significant part.

So does recreational fitness, versus doing a stressful, low paid, manual labour job, which may keep you fit, but “a lifetime of hard work doesn’t necessarily do you any good”.

With the current housing crisis and the gap between the haves and the have nots widening, she predicts the health gaps – and cost to Government – will widen.

Community initiatives and taking care of those in your neighbourhood can help.

However, older people who are isolated, “health-damagingly lonely”, and not in the middle-income bracket, tend not to turn up to wellness courses or activities.

We’re all in this together

In Rotorua, a community centre set up for social connections amongst seniors is one of a kind in New Zealand.

Parksyde is run by a charitable trust, with weekly activities offered at a small donation to cover costs.

They celebrate their 20th anniversary this year and are largely run by volunteers. One of their volunteer receptionists, Pam Carr, is 85.

Depending on what life has thrown you, it’s easy to have lost confidence or a feeling of wellbeing, manager Robyn Skelton says, but she points to an Otago University analysis of 292 centenarians, which shows having social activities of long-lasting interest helps decrease the chances of developing chronic illnesses and increases the chances of living past 100.

“I love being here, because it’s about creating opportunities that can change people’s lives, and there’s a lot of fun,” she says.

“It appears Covid-19 is going to have an impact for years, so it is critical that we build resilience in our older people by keeping them active and socially connected.”

For Annemaree Crawford, the community has been her saviour.

She’s running an event in Pāpāmoa on August 21 called Be well, age well, where she’ll have speakers on the topics of skin, nutrition, gut health, Pilates, and mindset.

Having had to rebuild herself from a “shattered state” leaving a toxic relationship, burnout, and nursing her dying father, the 50-year-old says health is “an involved topic”.

She found renewed wellbeing by becoming involved in the community and supporting other women.

Her cousin, 68-year-old Pearl Harper, who will speak at Crawford’s event, was a beautician in the 1970s, and shares that stress, hydration, and food are her tips in ageing gracefully, as well as having a positive mindset.

Harper suffered a moderate brain injury three years ago, which caused her to take a deeper dive into health.

“Anti-ageing is not just what we look like,” she says.

“It’s arthritis, blood pressure; and the mind also needs to be nurtured.”

She starts her day with a glass of warm water to aid digestion, as well as practising daily gratitude.

“We’re living in a health and wellness age, and that’s got to be a good thing, but I think a lot of people want a magic wand, whereas really, it’s a lifetime of good practice.”