A former member of a far-right organisation has told how she circumvented Facebook’s hate speech algorithms by making the group appear more ‘palatable’ on the social network.

Acacia Dietz spent two years as a member of the National Socialist Movement (NSM), the largest neo-Nazi organisation in the US.

Speaking on BBC documentary In The Face Of Terror, which airs tonight, Acacia explains how she ‘manoeuvred around’ the Facebook algorithms designed to detect and flag hate speech. 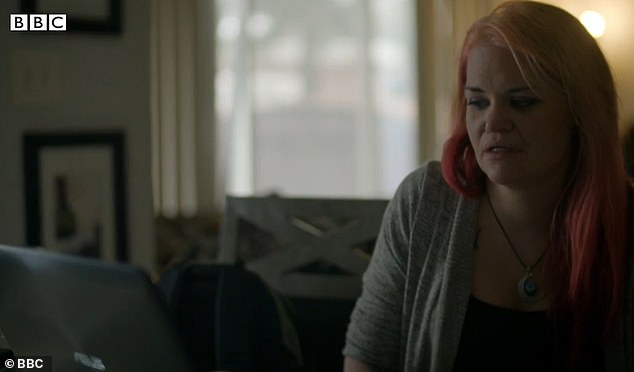 Acacia Dietz spent two years as a member of the National Socialist Movement (NSM), the largest neo-Nazi organisation in the US. Pictured, in BBC documentary In The Face of Terror 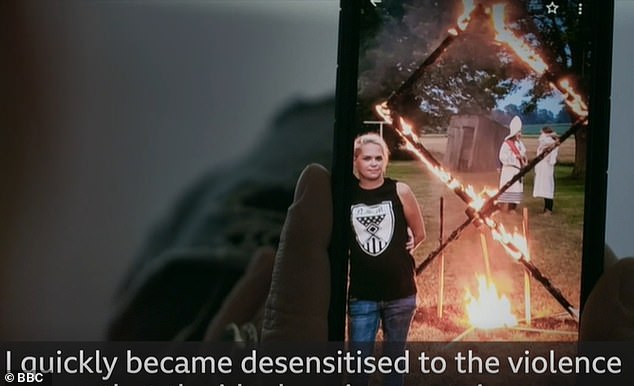 Speaking on BBC documentary In The Face Of Terror , which airs tonight, Acacia explains how she ‘manoeuvred around’ the Facebook algorithms designed to detect and flag hate speech. Pictured, Acacia in an NSM t-shirt at a rally during her time with the organisation

Acacia explained she would make the group more ‘palatable’ by removing overt Nazi and Hitler references from the site. Pictured, an example of NSM online media

‘You’re just proud to be white.’

It was only once users found the NSM website that they were introduced to the full extent of the group’s beliefs.

‘When people gravitate to the NSM website then you see the Swastikas,’ Acacia explains. ‘And that’s where the core beliefs then get introduced.’

The NSM openly idolizes Adolf Hitler, described in NSM propaganda as, ‘Our Fuhrer, the beloved Holy Father of our age … a visionary in every respect.’

NSM says only heterosexual ‘pure-blood whites’ should be allowed U.S. citizenship and that all nonwhites should be deported, regardless of legal status.

The NSM is probably best known for carefully staged protests, carried out in full-blown Nazi uniforms and swastika armbands. 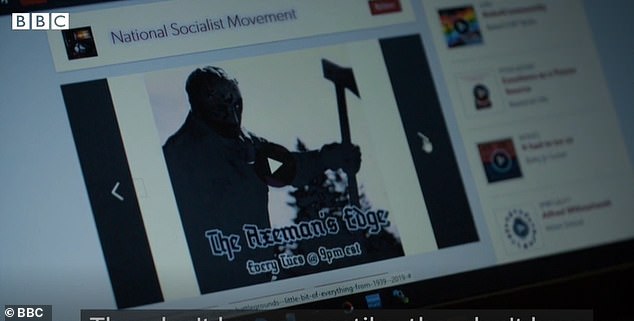 This example of an NSM web page shows Norse iconography, which has been appropriated by the far-right

Former leader Jeff Schoep, who left the group in January last year and has since renounced his racist past, tried to rebrand the group and appeal to a new generation of racists and anti-Semites by getting rid of such overt displays of Nazi symbols. The group now parade in black so-called ‘battle dress’.

Acacia explains she left the NSM following the March 2019 Christchurch terror attacks, in which 51 people were shot dead when a white supremacist targeted two mosques. The attacker streamed the shootings live on Facebook.

Although the attack was not formally linked to the NSM, Acacia felt there was a connection to the work she had done getting the group back on social media.

‘I cannot the bear the chance of something I have done makes somebody else go and do something horrific like this,’ she explains. 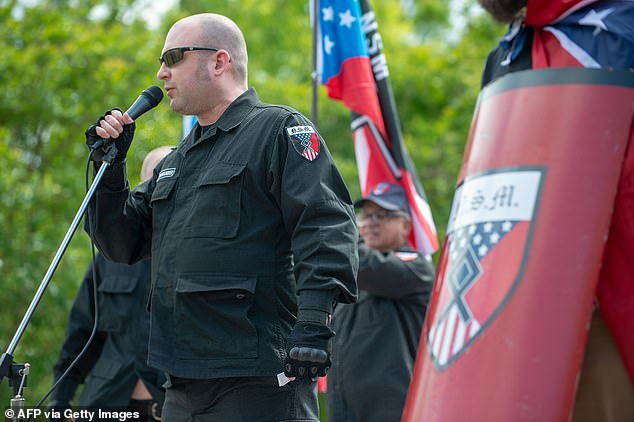 NSM says only heterosexual ‘pure-blood whites’ should be allowed U.S. citizenship and that all nonwhites should be deported, regardless of legal status. Pictured, former leader Jeff Schoep

In March last year Facebook announced it was banning white nationalism and white supremacy from its social network following criticism that it had not done enough to eliminate hate speech on its platform.

In a statement the social media giant said it there would be a ban on praise, support and representation of white nationalism and white separatism on Facebook and Instagram.

It continued: ‘While people will still be able to demonstrate pride in their ethnic heritage, we will not tolerate praise or support for white nationalism and white separatism.’

UK viewers can watch In the Face of Terror on Monday 19 October at 21:00 BST on BBC Two and on BBC iPlayer.