The Reserve Bank of Australia has held official interest rates at record low levels and kept its quantitative easing program unchanged despite the growing economic threat posed by lockdowns to deal with the coronavirus pandemic.

Following its monthly meeting on Tuesday, the RBA board held the cash rate at 0.1 per cent while sticking with its plan to start winding back purchases of government debt to $4 billion a week until at least November. 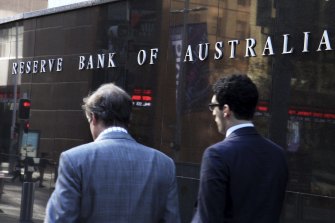 The RBA held rates steady at 0.1 per cent.Credit:Nicholas Rider

Economists are expecting the September-quarter national accounts to show a fall in GDP due to the impact of the lockdowns, which have hit Greater Sydney, Queensland, Victoria and South Australia over the past two months.

RBA governor Philip Lowe said while the national economic recovery had been stronger than expected, the recent lockdowns would probably result in GDP contracting in the September quarter.

“The experience to date has been that once virus outbreaks are contained, the economy bounces back quickly. Prior to the current virus outbreaks, the Australian economy had considerable momentum and it is still expected to grow strongly again next year,” he said.

“The economic outlook for the coming months is uncertain and depends upon the evolution of the health situation and the containment measures.”

The RBA committed to gradually reducing its quantitative easing program at its last meeting in early July when the NSW government hoped its lockdown would be finished by the end of the month. Some economists believe stimulus will have to be ramped up again given the changed circumstances facing the economy now NSW’s lockdown has been extended to the end of August and other states have put restrictions in place.

The bank is due to release its latest quarterly outlook on the economy on Friday.

Dr Lowe said the bank’s central scenario was for the economy to grow “by a little over 4 per cent” over 2022 and then by 2.5 per cent in 2023. That scenario is based on a significant share of the population being vaccinated by year’s end and a gradual opening of the international border from the middle of next year.

Dr Lowe said the lockdown was likely to see a near-term lift in unemployment but most of the impact on the labour market would be from a reduction in hours worked.

He said a lift in wages growth, which the RBA believes needs to be above 3 per cent to help lift inflation to its 2 to 3 per cent target band, would be only gradual.

“In the bank’s central scenario, it takes some years for the stronger economy to feed through into wage and price increases that are consistent with the inflation target,” he said.

Separate data from the Australian Bureau of Statistics on Tuesday showed the housing construction market was starting to ease after being buoyed by low interest rates and government support programs through the depth of the pandemic.

New loans for housing fell by 1.6 per cent in June, although they are still up by 82.6 per cent over the past year. Loans for owner-occupiers declined 2.5 per cent but are 75.9 per cent higher over the year.

Investors, however, are still borrowing, with their loans rising by 0.7 per cent in June to be 102 per cent up over the past 12 months.

Loans for construction by business tumbled by 19.6 per cent in the month to be 33.5 per cent down over the year.

Building approvals dropped by 6.7 per cent in June, with approvals for private homes down by 11.8 per cent. Despite the fall, private house approvals are still up by 44.9 per cent over the year.

Research from the ANZ released on Tuesday showed last month was a weak one for the national retail sector.

Based on its own card data, it showed while there had been a strong lift in Melbourne spending after the end of its lockdown, it was a different story in Sydney where expenditure on shopping and dining was around half its pre-lockdown level.

Travel spending in Sydney is also continuing to fall.

ANZ economists Adelaide Timbrell and David Plank said the surge in home office equipment buying from last year’s lockdown was not being repeated this time around.

“National furniture and homeware spending is still elevated, although the electronics and office equipment category is not seeing the same rush of the 2020 transition to remote working,” they said.