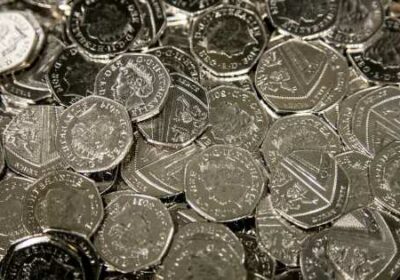 It is possible that loose change collecting dust in a dark corner of your home could be worth hundreds, if not thousands of pounds.

That’s because there has been a surge in extraordinary sales of rare 50p coins over the internet.

Some coins have sold for £21,000 while others have been auctioned for £1 only for a buyer to slash out hundreds on it.

Here, we take a look at some of the coins that could make you a huge profit.

Did you know the Royal Mint released rare Brexit 50p coins to mark the day the UK left the European Union?

The Queen’s head is on one side while the other has the words “Peace, prosperity and friendship with all nationals” engraved on it.

Remarkably, one of the coins was flogged for a staggering £21k on eBay – an incredible 42,000 times more than its value.

The listing read: “A coin to keep, with a possible future added value.”

Despite the huge transfer of money, the coin was then sent to the buyer in the Royal Mail.

The Kew Gardens 50p coin is believed to be one of the rarest of its kind.

And earlier this month one of them sold for £281, which is 300 times its value, after a bidding war online.

They are popular among coin collectors because only 210,000 were minted.

The Royal Mint says it is one of top 10 rarest coins in circulation.

And another Kew Gardens 50p coin was sold for £161.55 earlier this month after being listed for just 99p.

It was sold within seven days of being listed after 34 bids came in.

Around 2.2 million Blue Peter coins were minted in 2011 and released into circulation.

But a different version was made two years earlier and they are much more valuable.

Earlier this month one of the coins racked up 13 bids on eBay before selling for an eye-watering £266.59 after being listed for a pound.

It was said to be more valuable because it stayed neatly in its original packing when sold.

But you can also buy the coin in its complete set, costing just £11 from the official Westminster collection.

It features an athlete in the Olympics which was drawn by a young Blue Peter viewer in 2019.

Florence Jackson crafted the coin on the kids TV show, making the then nine-year-old the youngest person ever to design a UK coin.

The EC coin was released by the Royal Mint between 1992 and 1993 and is now selling for huge amounts.

They are harder to find than the Kew Gardens 50p.

They were released to celebrate the UK’s presidency of the European Council and to mark the completion of the Single Market.

Only 109,000 were made and experts say they could even be lurking at the bottom of your piggy bank.

According to coin collectors at Change Checker, the EC 50p could make you a profit of £60.

This still makes it a loss less valuable than the Kew Gardens counterpart despite being harder to get your hands on.

“Sometimes this is driven by low mintage figures, meaning there are fewer coins for people to collect, but it can also be driven by the popularity of the theme.”