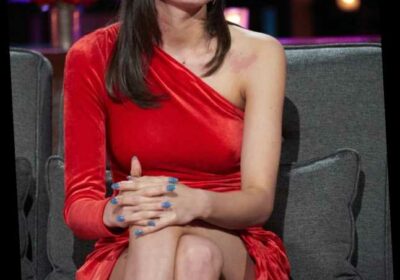 Season 25 of The Bachelor was, in fact, the most dramatic season ever, but the drama that went down this season largely took place off-screen. Shortly after Matt James’ season premiered in January, concerning allegations about contestant Rachel Kirkconnell’s past racially insensitive behavior began circulating on TikTok, sparking outrage among fans — especially when it became clear she was a frontrunner. Even though Kirkconnell ended up winning James’ final rose, the couple didn’t last, and apparently, some trolls think James is to blame. Rachael Kirkconnell’s Instagram defending Matt James after their breakup brings the racist backlash to light, and it’s truly eye-opening.

On March 17, Kirkconnell took to her IG Stories to reflect on the racist hate directed at her ex following their split. "I am taken aback by what I’ve seen tonight," she wrote. "If you think that attacking a person I care about with racist insults is what I would ever want, you haven’t been listening. Some of the things I’ve seen being said to and about Matt are repulsive. I respect the decisions that Matt has had to make during this experience. If you are directing hate towards him, please stop. Recognize someone’s humanity and think about the impact your words have." 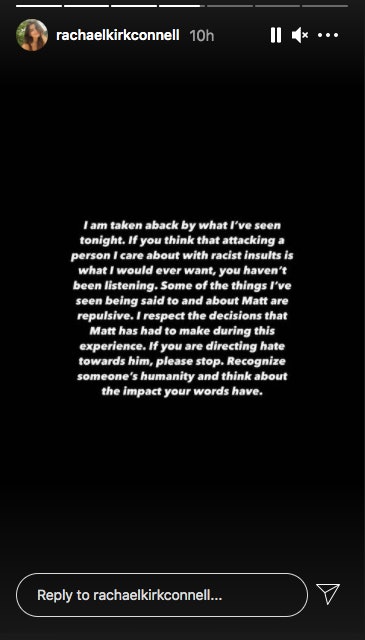 Following the show’s finale and the "ATFR" special, Kirkconnell reflected on her experience in an Instagram post, where she expressed regret for her past actions and ignorance. "While I never expected this outcome, I respect his decision completely," she said of the breakup.

She has since turned off her Instagram comments on the post, but here’s just a quick sampling of the supportive comments she’s received on other posts reflecting on her behavior:

Meanwhile, here are just a few of the (many!) hateful comments received by James on his own Feb. 22 statement about the "incredibly disappointing photos of Rachael Kirkconnell," as well as the controversial conversation between former Bachelorette Rachel Lindsay and host Chris Harrison.

The difference speaks for itself.

During "ATFR," James explained he had to step away from his relationship with Kirkconnell to protect himself and to give her space to educate herself about race. "When I questioned our relationship, it was in the context of you not fully understanding my Blackness, and what it means to be a Black man in America, and what it would mean for our kids," he said. "When I saw those things that were floating around the internet, it broke my heart because this was the last conversation I thought we’d be having. I didn’t sign up to have this conversation. And I knew that I had to take a step back for you to put in that work that you outlined that you needed to do… And that’s why we can’t be in a relationship."

Questions began circling about Kirkconnell’s views on race on Jan. 4, when TikTok user Maddy Bierster alleged Kirkconnell bullied her in high school for liking Black guys. On Jan. 11, Bierster posted another TikTok featuring messages from other anonymous sources who claim to have been bullied by the reality TV contestant. Fans noticed that Kirkconnell had also liked racist posts on Instagram, including a photo featuring a Confederate flag. Then, on Feb. 4, photos emerged of Kirkconnell at an antebellum plantation-themed fraternity formal in 2018.

A week after the fraternity formal photos came to light, Kirkconnell finally acknowledged the controversy in a Feb. 11 statement posted to Instagram, where she noted that her "ignorance was racist." The graphic designer said that — while she was ashamed of her lack of education — it’s no one’s responsibility to educate her and she will continue learning how to be antiracist on her own.

Let’s hope that Kirkconnell and her fans can learn from this controversy, that the Bachelor franchise truly strives to do better going forward, and that James is able to receive all the support and care he needs.