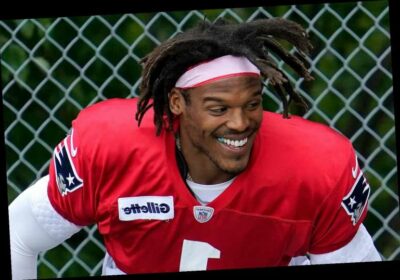 Cam Newton is getting another run at the New England Patriots starting quarterback job.

The 31-year-old is signing a $14 million contract to return to the Patriots for one year, following Tom Brady's departure from the club in early 2020, according to ESPN.

During Newton's first go with the team, the Patriots ended their season with a 7-9 record, missing their chance at the playoffs. Brady, on the other hand, won the 2021 Super Bowl with the Tampa Bay Buccaneers, where he just signed an extension on Friday.

Despite the lackluster record, Newton seemed to enjoy his time in New England, especially with head coach Bill Belichick. "I think Bill Belichick is the most misunderstood person in all of sports," Newton said during an episode of the I Am Athlete podcast in February.

"He's dope as s—. Like, he is a cool dude. He understands the game," he added. "He's like a historian of the game. For you to just sit down and chat with him it's like, damn, he's going back and he's got film. Like, literally teaching the game."

During the interview — which was filmed alongside former NFL players Chad Johnson, Brandon Marshall, and Fred Taylor — Newton said he'd like to return to the Patriots.

"I'm getting tired of changing," explained Newton, who spent most of his career with the Carolina Panthers. "I'm at the point in my career where I know way more than I knew last year."

Around the time the podcast was published, Newton made headlines when a high school football player was filmed taunting him during a football camp. The student, Jseth Owens of Perkiomen Valley High School in Pennsylvania, went viral after he taunted Newton for being a free agent. He later apologized on social media.

After the incident, Newton posted a lengthy message on his Instagram page that included footage of him speaking with Owens after the altercation.

"People often forget as athletes that are often seen on TV — loved by most, hated by some — we are real dads, real friends, real brothers, real sons, real human beings," Newton wrote. "With that being said, when I attend tournaments all across the country with my all-star team, I have given my time, my energy and my expertise to these kids coming into our program for over 11 years and that is not what people want to hear or even want to see."

"People want to see me arguing with another young man and to see me 'get in my feelings.' But the truth is this, I impact kids' lives in a positive way," he said. "Make no mistake about it, I allow kids to realize their 'out' by using their football talents to get them to the next level and in most cases out of the hood."