Home » Prince Philip: The rise of the bespoke hearse

Prince Philip: The rise of the bespoke hearse 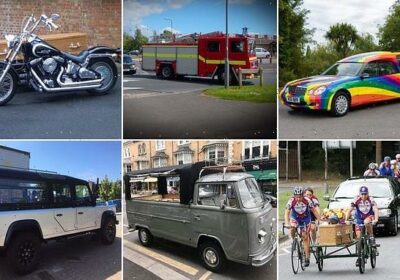 The rise of the bespoke hearse: As Prince Philip’s custom Range Rover is unveiled, funeral directors reveal how families have requested everything from tandem bicycles to milk floats in trend for ‘ultra personal’ send-offs

As photographs of Prince Philip’s bespoke Land Rover hearse are unveiled ahead of his final farewell in St George’s Chapel, FEMAIL takes a look at the rise of the bespoke hearse.

The Duke of Edinburgh’s project to custom build his own Land Rover hearse spanned 16 years, with Philip, who died on Friday aged 99, requesting a repaint in military green and designing the open top rear and special ‘stops’ to secure his coffin in place.

The polished sturdy, utilitarian vehicle, with its heavy duty wheels and angular structure, stands as a showcase for the duke’s practical nature, and his passion for functional design and engineering.

But according to Helen Chandler, Head of Operations at Co-op Funeralcare, the monarch isn’t alone in wanting to add his own personal touches to his own hearse.

‘Personalising your own or your loved one’s funeral is a really important part of saying goodbye and we are definitely seeing an increase in requests for more unique hearses,’ Helen commented. ‘In recent years these have included a milk float, tractor and trailer, motorcycle, tandem bicycle, converted steam train and even a canal boat.’ 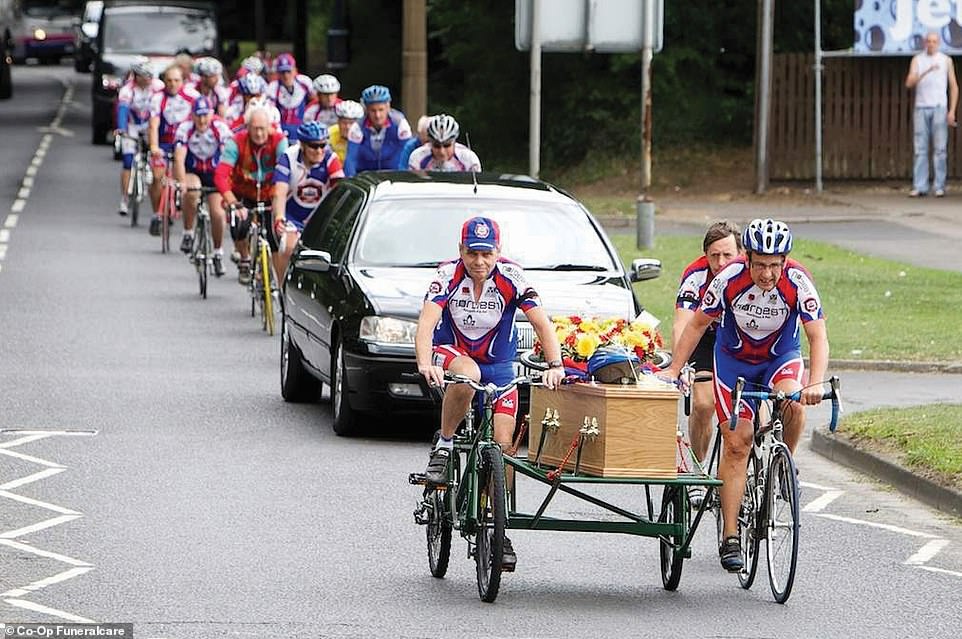 Helen Chandler, Head of Operations at Co-op Funeralcare, said the company has seen an increase in requests for more unique hearses in recent years. Pictured, a tandem bike 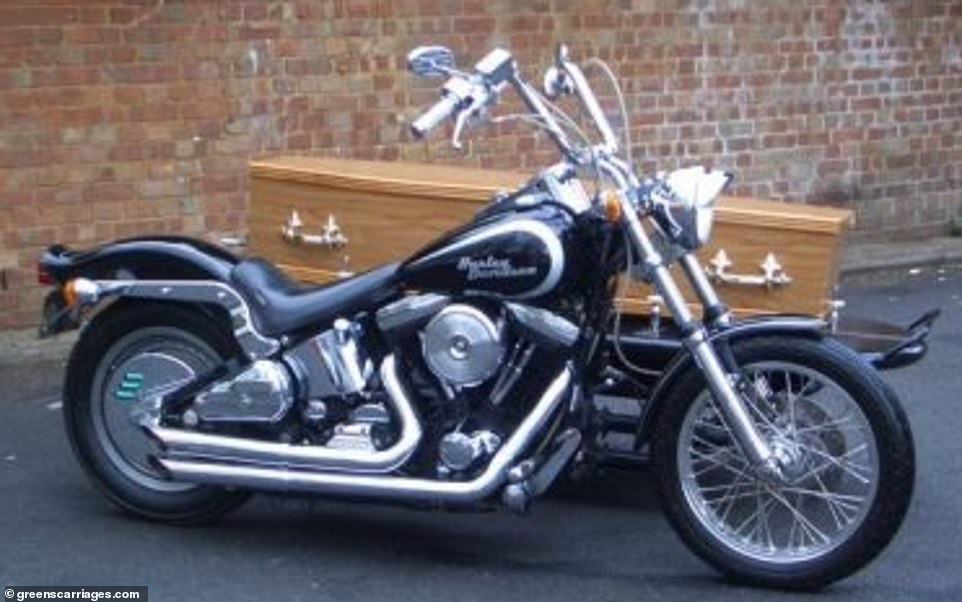 From Union Jack, Trike and Biker hearse (pictured) to bright pink, Tamara F. Kauffman explained that alternative hearses provide something for everyone.

In 2019, research from Co-op Funeralcare found that 48% of Co-op’s funeral directors have been asked to source a unique hearse for a funeral – with prices starting from £465.

‘We have also personalised our own fleet of hearses to reflect the differing wishes of individuals, with one featuring all the colours of the rainbow and another decorated with beautiful poppies,’ continued Helen. ‘We all live unique lives so it’s important that our final farewell reflects this.’

‘As no two lives are the same, we believe no two funerals should be the same, as every life is unique,’ she explained. ‘We take the time to listen to the individual life stories of the deceased person to understand their interests and passions to create a funeral that best symbolises who they were.

‘This provides great comfort to families, as they know they have done everything possible in creating a personal and unique send off that reflects their loved ones life.’

The cost of the fire engine hearse (pictured), from C.P.J Field, is calculated on an individual case by case basis depending on the location 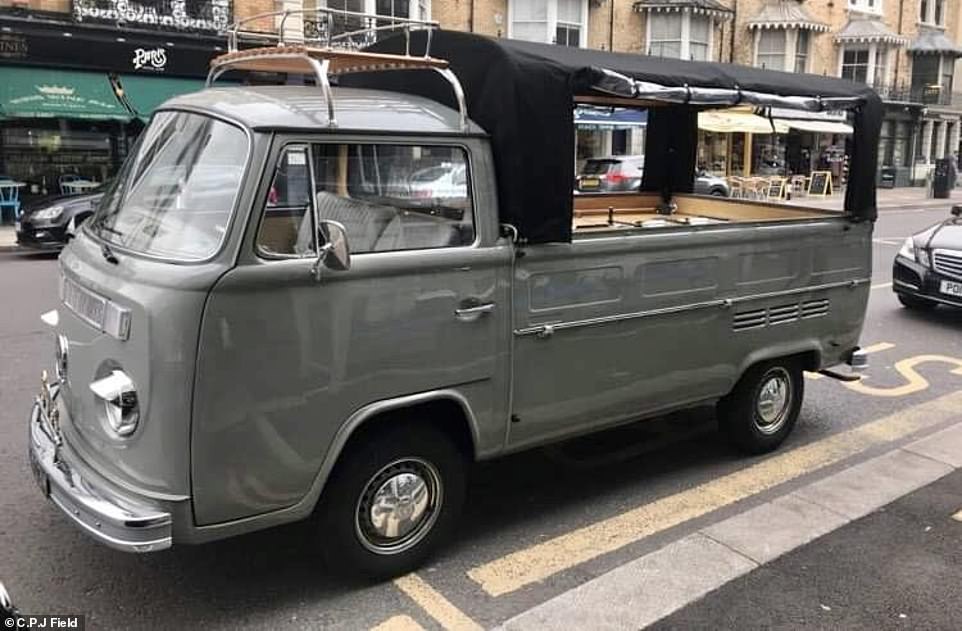 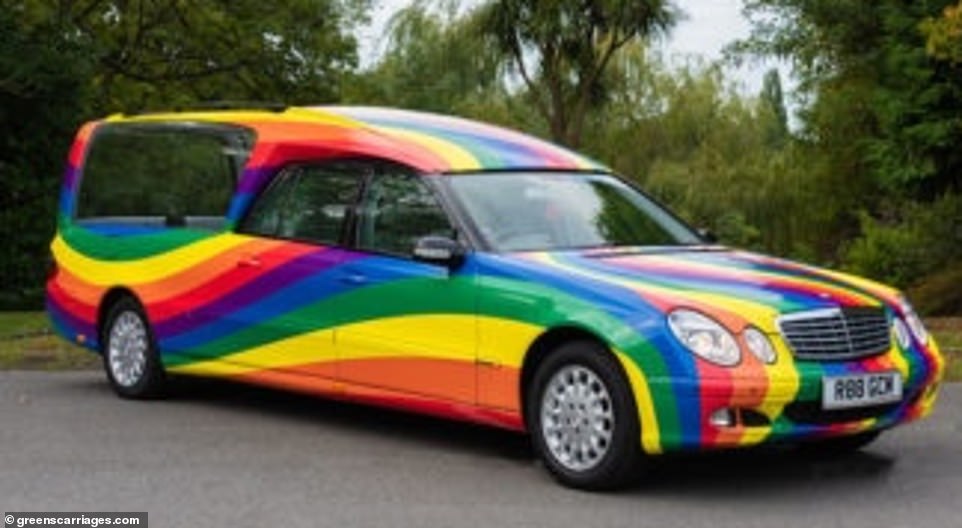 Tamara F. Kauffman explained that a bespoke hearse will not only help the send off be one that will ‘not only be very much remembered but will raise a smile upon everyone’s face shadowing some of those tears.’ Pictured, the multi-coloured hearse

Emily went on to explain that as a 10th generation family business, they hear so many wonderful stories from many interesting walks of life.

She continued: ‘The father who devoted his working life to the Fire Service, how better to celebrate this life than by travelling to his final resting place on a Fire Engine; or a husband who spent his weekends fine tuning his antique collection of bikes; a motorcycle and side car hearse is a fitting way to be laid to rest.’

‘From route master bus fanatics, to pink taxis and tanks; we are all unique and every funeral should be unique in reflection of this.’

And costs vary depending on the bespoke hearse desired – with prices for the motorcycle and sidecar starting from £450, the Land Rover hearse from £600, and the Routemaster bus from £650.

Meanwhile, the company confirmed that the tank and fire engine costs are calculated on an individual case by case basis, depending on the location. 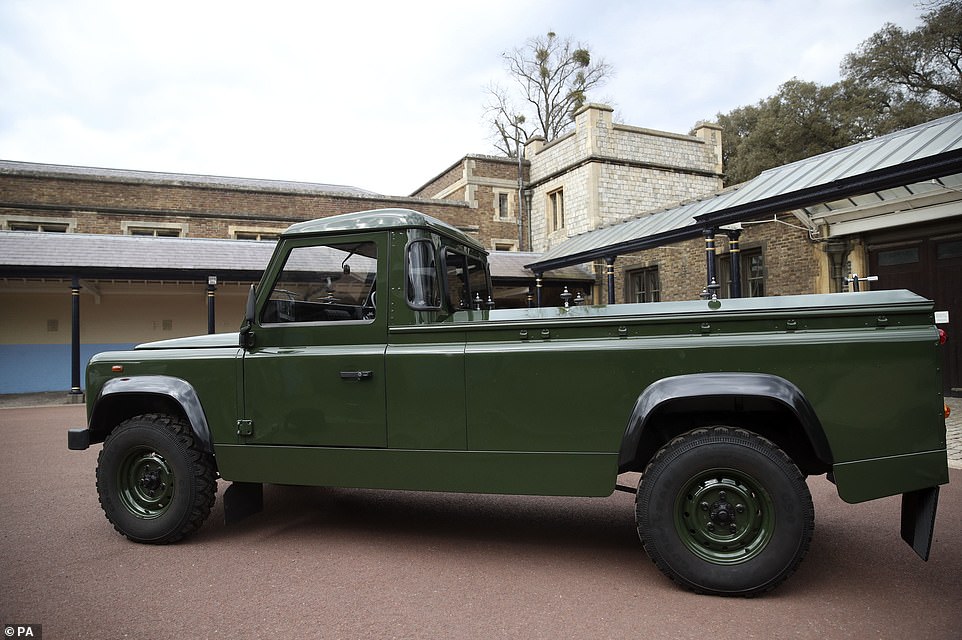 Pictured, the Jaguar Land Rover that will be used to transport the coffin of the Duke of Edinburgh at his funeral on Saturday 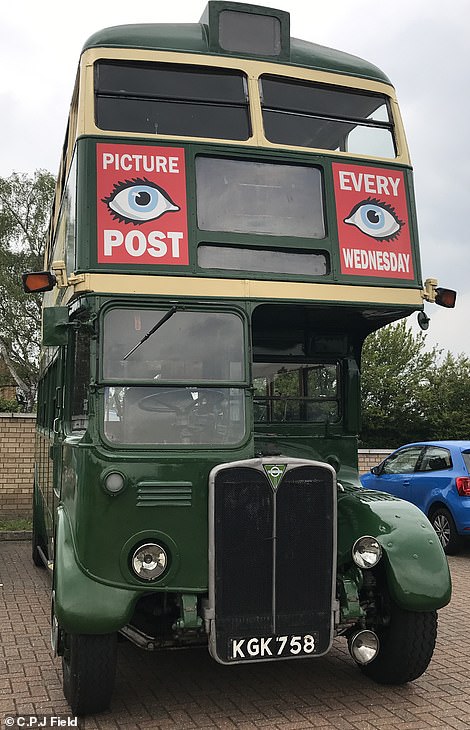 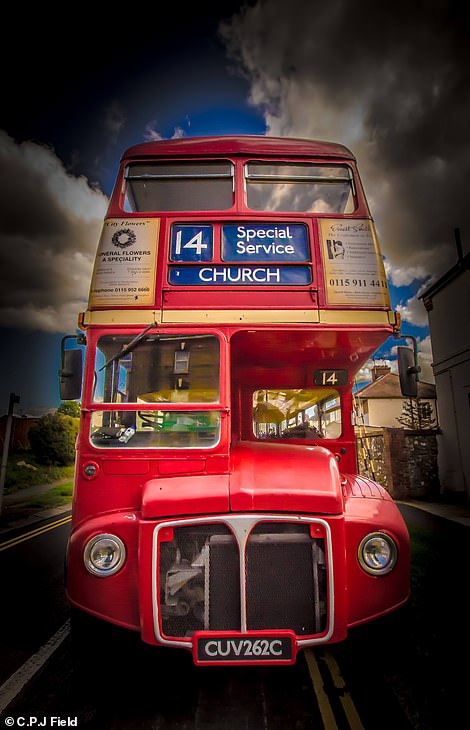 The routemaster bus (pictured right) is among the bespoke hearses available and will cost from £650. Pictured left, another bespoke bus hearse 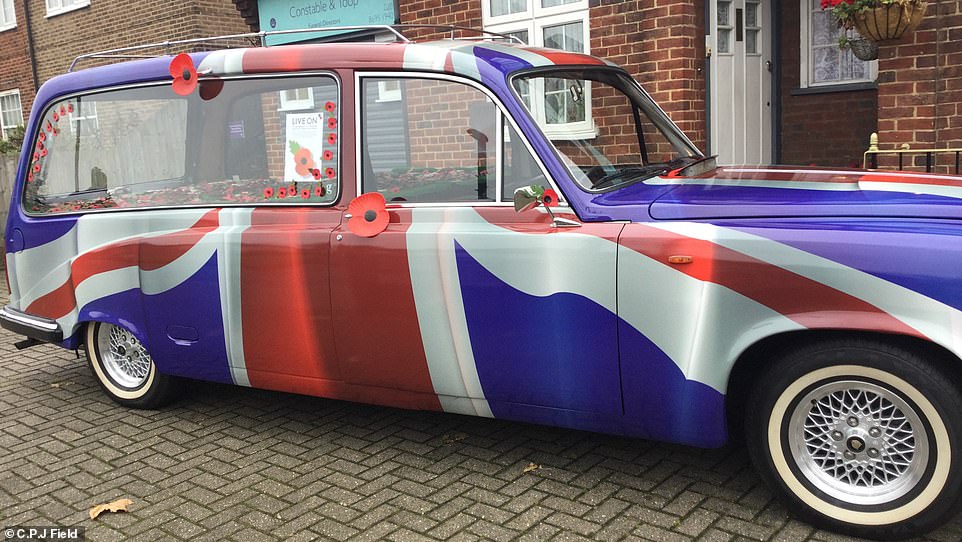 Among the standout bespoke hearses available at C.P.J Field include one designed with the pattern of the Union Jack Flag (pictured)

Elsewhere, Matt Morgan, Head of Funerals at Farewill, went on to say that while the funeral industry hasn’t changed in over 150 years – what people want from a funeral is changing.

‘We need to move away from the faceless, Victorian approach to death, and instead help people to remember their loved ones in a way that reflects who they were,’ he explained.

‘Our research has found that people are looking for more personal ways to celebrate a life, with almost half of respondents saying they would rather see money spent on meaningful elements and personal touches such as an urn, rather than a lavish service.’

‘Almost a third of people think funeral directors need a refresh, and a quarter that they are “old fashioned.”‘

Matt continued: ‘At Farewill, we believe that funerals should reflect the person you’re remembering. If that means booking a bespoke hearse – whether a Land Rover, a motorbike or a campervan – then that’s what you should do.’ 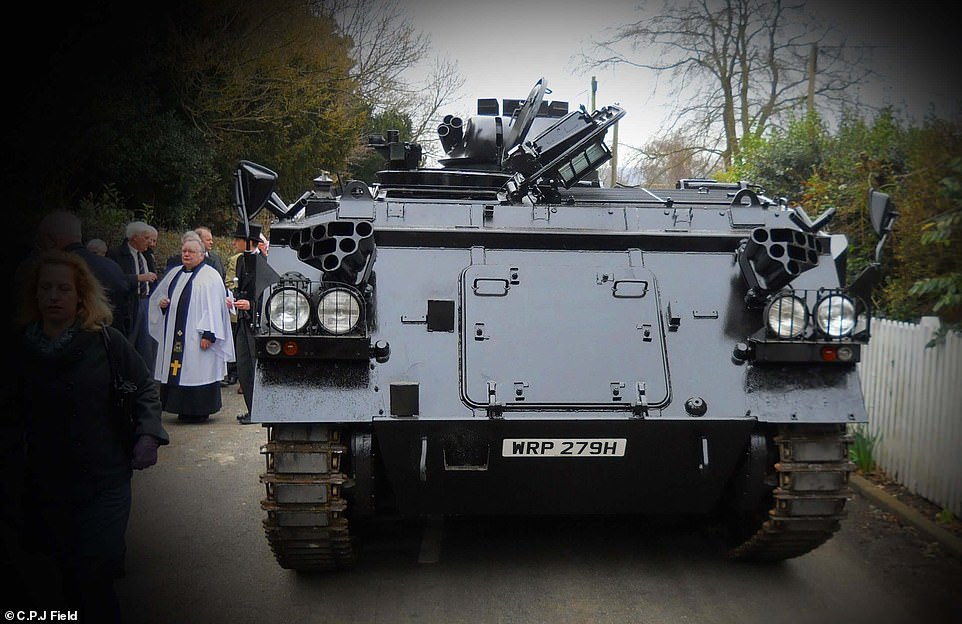 The cost of the tank hearse (pictured), from C.P.J. Field is calculated by an individual case by case basis depending on the location 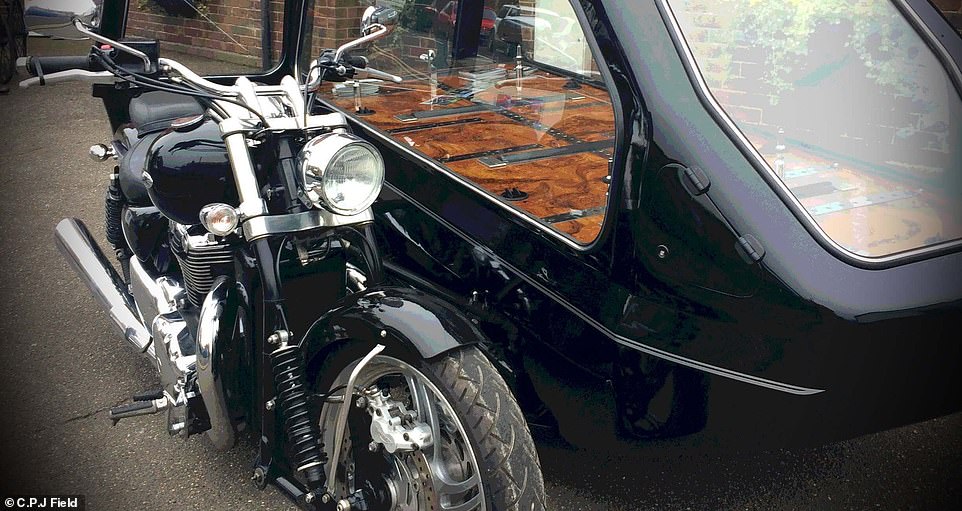 This unique motorcycle and sidecar bespoke hearse (pictured) from C.P.J Field has a starting price from £450

Tamara F. Kauffman has been in the industry for some 24 years and seen first-hand how society are somewhat more adjustable to speaking about death and dealing with after death and it’s funeral options.

‘Alternative hearse use is such a wonderful option,’ she explained. ‘There are so many truly amazing hearses ranging from leopard print, pink, rainbow, the Union Jack, Trike and Biker hearse, trailer hearse for families and funeral directors to use as a more ‘low key’ option plus so many more.’

‘These alternative options provide something for everyone. A little quirkiness for those who have passed that had an amazing sense of humour.’

‘A celebration of ones life and a send off that will not only be very much remembered but will raise a smile upon everyone’s face shadowing some of those tears.’ 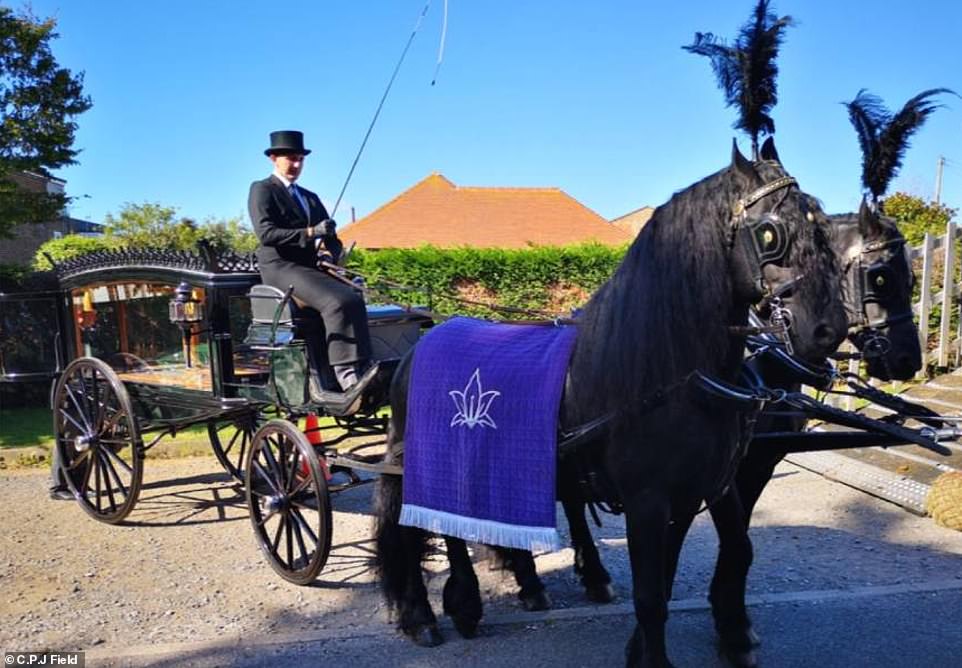 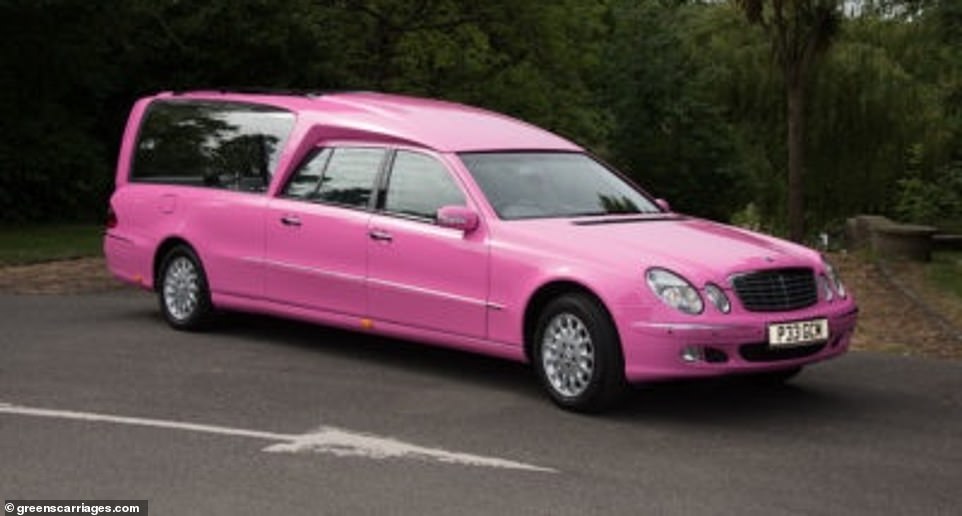 Tamara F. Kauffman added that the bespoke hearses, such as this bright pink one, provide a ‘little quirkiness’ for those who have passed that had an amazing sense of humour

He first began the long-lasting venture to create his own bespoke hearse in collaboration with Land Rover in 2003, the year he turned 82.

The Defender was made at Land Rover’s factory in Solihull in 2003 and Philip oversaw the modifications throughout the intervening years.

The duke, who served with distinction in the Second World War and held special associations with all the Armed Forces, requested the original Belize Green bodywork be switched to Dark Bronze Green, a colour used for many military Land Rovers.

He also designed the open top rear section where his coffin will rest, made to his exact specifications, including the rubber grips on silver metal pins known as the ‘stops’ or ‘stoppers’ which perform the crucial task of preventing the coffin from moving. 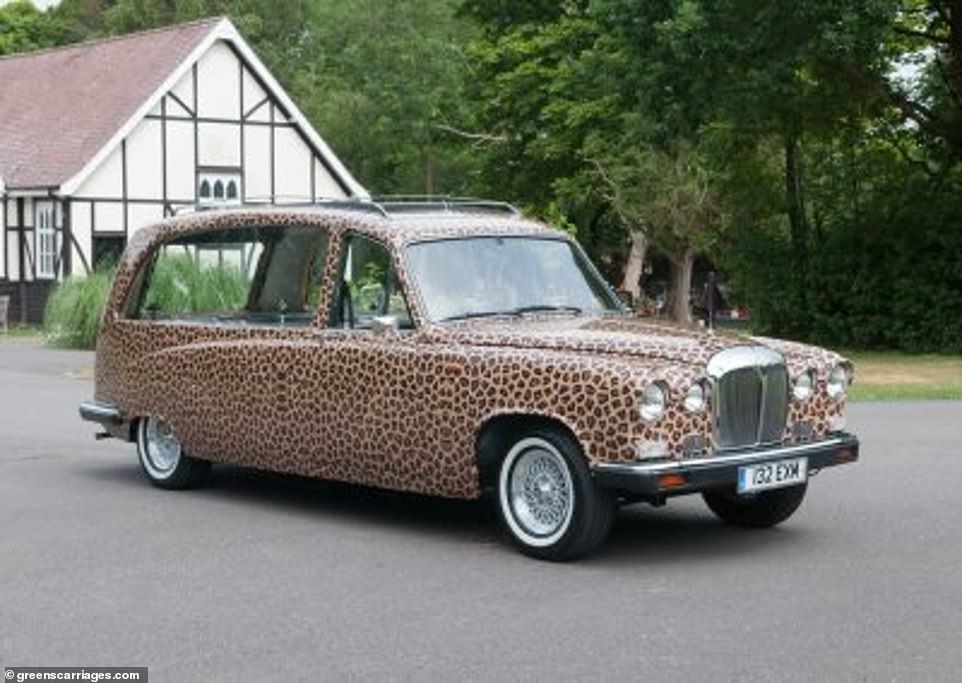 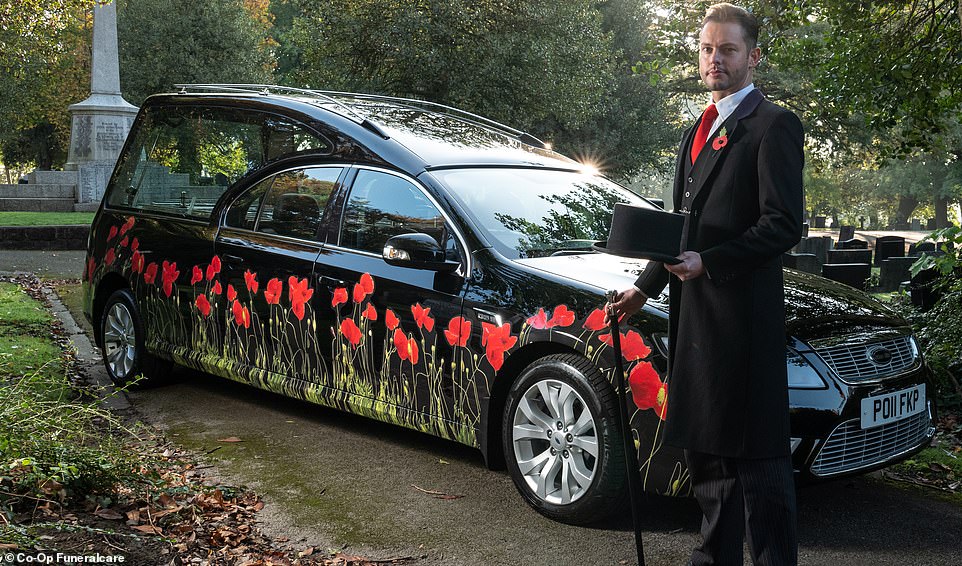 Head of Operations at Co-op Funeralcare said: ‘We have also personalised our own fleet of hearses to reflect the differing wishes of individuals.’ Pictured, a hearse covered in poppies

Details on the vehicle include matching green hubs, a black front grille, a single cab and no registration plates.

Eighteen years after the duke began the Land Rover project, the vehicle will finally be used for its intended function on Saturday.

The vehicle will ferry Philip’s coffin in a slow procession from the state entrance of Windsor Castle through the grounds to the west steps of St George’s Chapel, followed by the Prince of Wales and other members of the royal family on foot.

Land Rover has maintained the vehicle since it was built and has prepared it for the funeral in collaboration with the Royal Household.