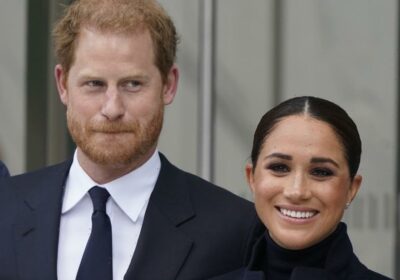 Prince Harry and Meghan Markle, the Duke and Duchess of Sussex, will accept the NAACP President’s Award during the 53rd annual Image Awards on Saturday.

“It’s a true honor to be recognized by President Derrick Johnson and the NAACP, whose efforts to propel racial justice and civil rights are as vital today as they were nearly 115 years ago,” stated Prince Harry and Markle.

The couple also announced that they’ve partnered with the NAACP to create a new honor — the NAACP-Archewell Digital Civil Rights Award — supported by their Archewell Foundation and administered by the NAACP. The annual award will recognize leaders creating transformational change — at the intersection of social justice and technology — to advance civil and human rights. Each year, the honoree will be awarded a $100,000 unrestricted stipend to be used to advance new work, expand leadership and expertise or continue to make an impact in the field.

“We’re thrilled to present this award to Prince Harry and Meghan, the Duke and Duchess of Sussex, who together have heeded the call to social justice and have joined the struggle for equity both in the U.S. and around the world,” added Derrick Johnson, NAACP president and CEO. “Not only do they continue to lead by example, the Duke and Duchess have also decided to inspire the next generation of activists through the NAACP-Archewell Digital Civil Rights Award, ensuring the support and recognition of generations of civil rights leaders to come.”

The Digital Civil Rights Award’s inaugural recipient will be author and scholar Dr. Safiya Noble, who has pioneered the study of how digital technologies intersect with culture, race and gender.

Dr. Noble is an internet studies scholar and professor of gender studies and African American studies at UCLA. The 2021 MacArthur Fellow also serves as the co-founder and faculty director of the Center for Critical Internet Inquiry (C2i2), which is a partner to Archewell Foundation.

“At both the UCLA Center for Critical Internet Inquiry, and at the Equity Engine, we are working toward greater possibilities for vulnerable people,” said Dr. Safiya Umoja Noble. “Digital civil rights and protections from harm on the internet are a crucial pathway to a more just world, and I am grateful for the support of the NAACP and Archewell Foundation for contributing to our efforts to create more compassionate and democratic societies where Black women and women of color can thrive, too.”