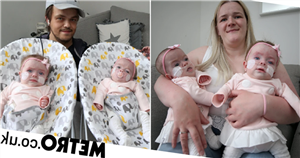 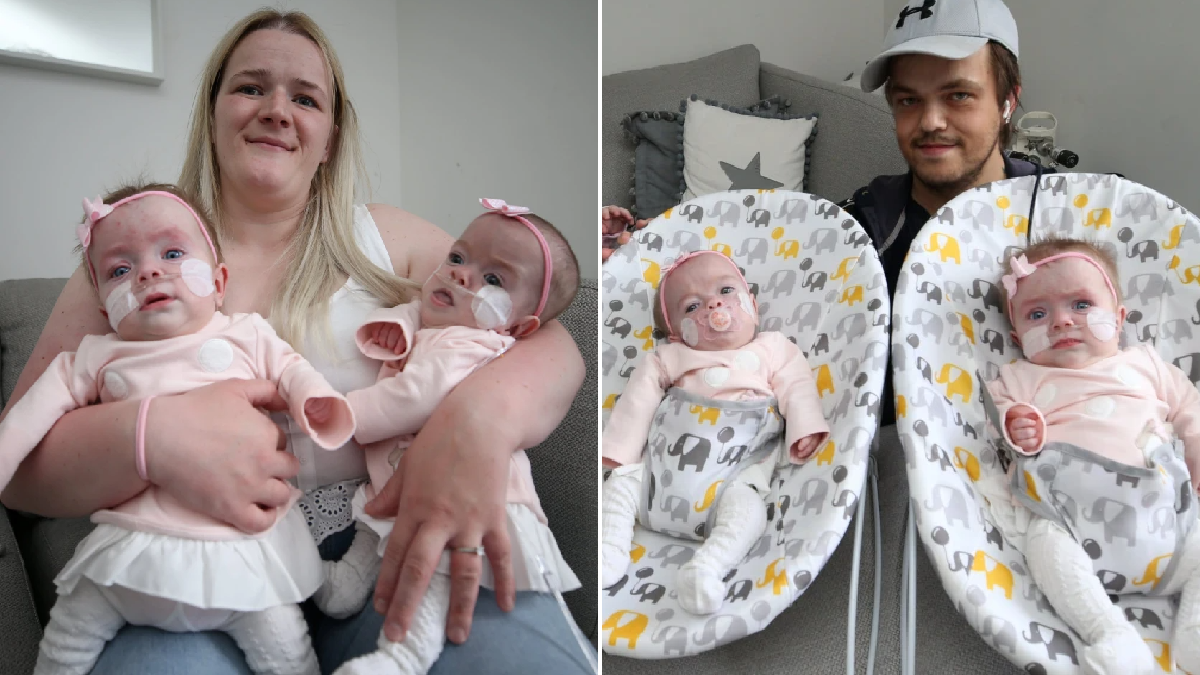 A baby who was born nine weeks early, with her twin sister, has survived Covid – despite suffering from chronic lung disease.

Mum-of-four Chloe Connolly gave birth to twins Esmaè and Averly in the bedroom of her home in North Lanarkshire on September 7.

After suddenly feeling pain, 25-year-old Chloe delivered the girls with the help of partner, Darren McGuinness, before the babies were rushed to the University Hospital Wishaw.

Chloe said: ‘I was feeling rubbish and overnight I started to get really bad pains, it all happened so fast.

‘We were on the phone with paramedics for 28 minutes and by the time they arrived the twins were born.

‘I had them in the bedroom because I couldn’t even make it to the toilet, I just bent down and grabbed them myself.

‘Averly was born first and six minutes later so was Esmaè.

‘I never even had paracetamol.’

Then, the couple were thrown yet another curveball.

While in hospital, Averly caught Covid the following month.

Since the baby suffers from chronic lung disease, doctors explained her chances weren’t good. And in October, Chloe and Darren were told Averly wouldn’t likely survive.

Medics then transferred the baby to the Royal Children’s Hospital in Glasgow, where she was put into a coma and hooked up to a ventilator.

‘It has been a complete rollercoaster for us,’ recalled Chloe. ‘We didn’t think she would survive to start with.

‘The doctors had told us we were looking at hour by hour, they couldn’t even say she had days left.

‘They transferred her to the Royal Children’s Hospital and had a neonatal surgeon in the ambulance in case anything went really wrong.

‘We drove behind them and I couldn’t help but think how I was about to have to plan a funeral for her soon.

‘I started to think about flowers and arrangements in my head, it was horrible.

‘Thankfully I didn’t have to do that because after being put in a coma and on a ventilator she started to get better. We couldn’t believe it.’

After two weeks of being treated by specialists, Averly was reunited with her twin in the Wishaw neonatal unit.

Chloe adds: ‘Averly had so many drips, but slowly doctors started taking them off her, and we realised she was getting much stronger. After two weeks she was even able to leave the Royal.

‘When she came back to the Wishaw neonatal unit the staff were all shocked to see her.

‘I don’t know how she did it, she was so tiny and just had the strength to pull through.’

The twins were finally both discharged on November 12 – and it’s hoped they will eventually outgrow their lung condition.

Now, at seven months old, they are happy at home.

Chloe said: ‘None of it really hit me till recently.

‘I feel like a different person now compared to then. It has been a lot but the NHS has been so great.

‘The doctors and nurses have all been so brilliant, everyone we came across has been so supportive and really helpful.’