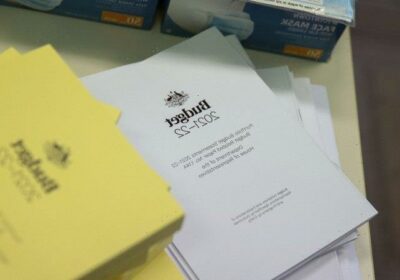 Falls in the prices of Australia’s most important resource exports could deal a major blow to repairing the federal budget and economists caution it could take a decade to unwind the fiscal damage caused by the coronavirus recession.

As the government prepares to ignore its own rules to repair the budget to avoid revealing spending cuts ahead of next year’s election, the nation’s finances may take a further hit due to a fall in demand for Australia’s major resources. 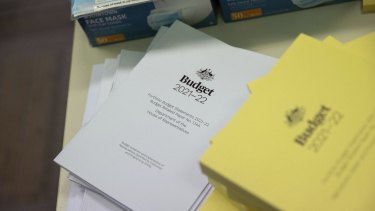 The 2021 federal budget was full of spending initiatives to help the recovery from the pandemic but economists want the government to consider consolidation.Credit:Dominic Lorrimer

Commonwealth Bank economists Kristina Clifton and Vivek Dhar on Tuesday said the price for iron ore, Australia’s single largest export, could slip 15 per cent over the next 12 months and fall below prices assumed in the federal budget.

Thermal coal prices, which the bank believes will average $US210 a tonne this quarter, could end next year at $US75 a tonne. Prices for LNG and coking coal are also expected to fall over the next 12 to 18 months.

“Falling commodity prices through 2022 and 2023 will weigh on federal government revenue,” they said.

“However the downtrend in commodity prices is expected to come at a time when the domestic economy is in a strong expansion phase following the pandemic lockdowns of 2021. The labour market will be tightening and that will generate a lift in wages growth.”

This could make the case for fiscal consolidation even more critical. Independent economist Nicki Hutley said it was definitely time to start budget repair but cautioned it had to be done in a slow and steady way. She recommended axing “dubious” government programs, such as the already-under way inland rail project or its collection of railway station car parks, and investing in programs like childcare that would help lift productivity in the long term, even with an upfront cost.

“If we can lift economic growth rates that will aid budget repair, but other tough measures will also need to be taken. Sadly, the cuts usually fall in areas that don’t win votes like foreign aid. I’m sure the National Audit Office could come up with plenty of examples of waste – if only their budget hadn’t been cut.”

The head of the Grattan Institute, Danielle Wood, said while the focus had been on the federal budget deficit, there were also issues with the shortfalls being run by the Victorian and NSW governments.

“I think it’s probably going to be more of middle-distance race than a sprint for state governments,” she said.

“If we do see healthy labour markets, states should start to move but I would suspect it’s a five to 10-year project. A serious overhaul of the processes for selecting and procuring major infrastructure projects would be a very good place to start.”

Market Economics managing director Stephen Koukoulas wants to see budget repair on the agenda, but warned against moving too early.

“We want to see a decent growth rate in the December quarter and March quarter. We don’t need more stimulus. We should let the automatic stabilisers kick in.

“If it does transpire that the economy is powering ahead by mid-2023 then yes you would need to look at cuts for repair,” he said. This could include reducing generous tax breaks in superannuation for high-income earners and capital gains tax discounts, he said, warning it is “politically fraught”.

He also encouraged the government not to undertake more income tax cuts. “Just let the budget repair itself through a bit of inflation and growth [initially],” he said.

Independent economist Saul Eslake said budget repair would eventually be required but he didn’t necessarily think it needed to be on the agenda yet as the debt position is considered sustainable.

He said there was a strong argument to take it slowly and let the Reserve Bank bring rates back up first.

“There has been too much reliance on monetary policy [across the world] and not on fiscal policy, leading to inflated asset prices,” he said. “Let the Reserve Bank go first and make progress on returning interest rates to more normal levels.”

He said this would give politicians time to lay the groundwork with the public for tax reform. With RBA governor Philip Lowe saying 2024 is still his most likely scenario for a rate increase, Mr Eslake said this would make the 2025 election the most plausible time to propose spending cuts or tax changes to the public.

He suggested more taxes on property and wealth and fewer tax breaks on superannuation benefiting top earners as among the considerations.

RBC Capital Markets managing director Su-Lin Ong said fiscal repair was “unlikely” over the next 12 months due to the upcoming federal election.

“We’re always mindful that budgets are really political documents and that will be even more the case in the next budget,” Ms Ong said. “The reality of what is going to be a very close federal election tells you cuts to expenditure and active budget repair are very unlikely,” she said.

“From a long run prudent perspective there should be some thought to at least getting outlays back to historic norms, but I’d say there’s little political appetite to do that.”

But Moody’s Analytics senior economist Katrina Ell said during a webinar on Tuesday that state and federal governments had already removed a lot of the emergency support provided during the lockdowns.

“We do think it [budget repair] should happen gradually. It’s important to keep in mind the economic recovery in Australia is still gathering steam,” she said.

“Moving too aggressively on fiscal consolidation – or for that matter, monetary policy normalisation – is a dangerous game and it risks the recovery and will delay ultimately the economy healing from the scars of COVID-19.“