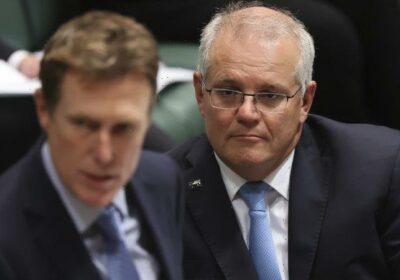 Christian Porter and the ABC were competing so hard on Monday to claim victory in their defamation fight they forgot to name the clearest winner.

Prime Minister Scott Morrison wins from an outcome that keeps the former attorney-general out of the courts on an allegation he raped a woman in January 1988. 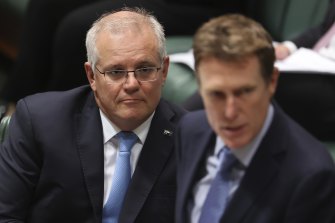 Prime Minister Scott Morrison (left) wins from an outcome that keeps former attorney-general Christian Porter out of the courts.Credit:Alex Ellinghausen

There will be no further defamation action against the ABC that allows Porter to enter the witness box and deny the claims against him under oath.

Morrison and the Coalition would have paid the price for a court case that dragged out the scandal and overlapped with the next federal election campaign, especially if the Prime Minister seeks to go to the ballot box in Spring.

With observers expecting court hearings in September and October, there was a clear risk of political damage during the campaign, so the government benefits from Porter’s decision to stop now.

The government also gains from Porter’s practical decision to accept his transfer to the industry portfolio.

Voters lose, however, because there can be no resolution to the worst claims levelled against an Australian cabinet minister while in office.

Porter indicated through his lawyers in March that he was willing to give evidence under oath. Now he will not have that chance.

Porter has issued a total denial of the claims he raped the woman when he was 17 and she was 16. “I can say to you all it didn’t happen,” he said in March. But the cloud over the claims will never lift.

Tragically, the woman who made the accusation took her life in June last year. While she set down her claims in writing, her document was not a formal statement to police. Most Australians cannot judge her allegation for themselves because they will never see it. There are strong grounds for a coronial inquiry into the woman’s death.

Porter could have pursued the case. Crucially, the ABC did not express regret for reporting the claims – only for the way some readers might have “misinterpreted” the article.

“The ABC did not intend to suggest that Mr Porter had committed the criminal offences alleged,” the broadcaster said in a statement. Viewers might be forgiven for having missed that nuance.

With no resolution, Labor and the Greens returned to their calls for an independent inquiry. The problem with this is obvious: the ABC did not argue the accusations could be substantiated to a criminal or civil standard. This remains a hurdle for any inquiry.

The entire case remains troubled by a political double standard. Former Labor leader Bill Shorten was able to move on from rape allegations made against him in 2014.

Porter should get equal treatment. The NSW Police chose not to pursue the case. He should be allowed to continue his political career.

The two cases are different, of course, because the woman who made her claims against Porter can be heard only through her written words. But no two cases could be exactly the same. The cases are not sufficiently different to justify a double standard.

But on that question, too, there will be no resolution.