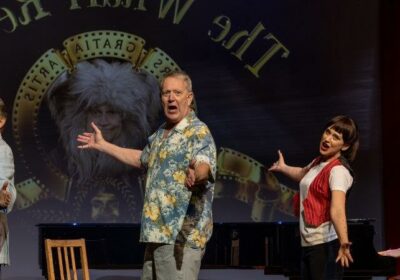 The Wharf Review: Can of Worms
Seymour Centre
November 25
Until December 23
★★★
After their farewell appearance under the auspices of the Sydney Theatre Company earlier this year, the Wharf Revue opens a new Can of Worms at the Seymour Centre. Not much has changed. The costumes are less glitzy and the stagecraft a bit DIY, but while the world is still full of narcissists and megalomaniacs, rape apologists and real estate agents, the material flows like renewable energy – abundant, if patchy. 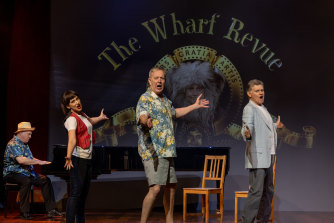 This year’s hits include Jonathan Biggins as Donald Trump, prowling the stage with slick glee, and Drew Forsythe reprising his Pauline Hanson, flanked by a febrile Mark Latham. Drew Forsythe’s Pauline Hanson is like fine wine, improving year on year, to the point that he is almost more Pauline than Pauline herself.

Meanwhile, his Elizabeth II treads the delicate line between pathos and parody: he lands palpable hits on her sons Andrew and Edward before leaving the stage to go and ask Philip what he thinks. As for Phil Scott, he’s lured away from the piano for a splendidly self-satisfied Kevin Rudd.

Mandy Bishop fronts one of the best sketches of the night as lead singer of Gladys and the Premieres. Bishop has Berejiklian’s hand-wringing body language to a T and Biggins is delighted and delightful on balalaika. Bishop follows up her Gladys with a rasping Jacqui Lambie, delivering one of the best lines of the night. “I’ve had some dud roots in my life but, really, Daryl McGuire…?”

Talking of duds, an owlish Bob Carr’s pointy rewrite of Coleridge’s Kubla Kahn is impressive but dull, and a space odyssey – yikes, Palmer the Hutt! – is weak. As for the first big number, a spirited hack of Welcome to the Rock from Come from Away, this recycles decades old material – remember the Tampa, anyone? There are plenty of mentions of current existential crises – koalas, Covid, climate change – but this edition of the revue loses its mojo, along with the zeitgeist, too often.

The strong finale redeems an off-and-on night by taking us into the world of Oz, where heartless real estate agents and clueless financiers take Dorothy and Toto down the yellow brick road to meet a distinctly unmagical wizard. The budget may be low, but the energy is high, even if the sun is not always shining.