Home » Lifestyle » ‘Our bond can never be broken’: Isaiah Firebrace on meeting his mother at 12

‘Our bond can never be broken’: Isaiah Firebrace on meeting his mother at 12

Isaiah Firebrace is a singer and author best known for representing Australia in Eurovision 2017. The 22-year-old opens up about the motherly figures in his life, listening to Beyonce in secret at night, and his new children’s book.

My maternal grandma, Pamela, is tall and strong and is a beautiful lady. She’s half-German; her father was an officer in Germany in the 1920s before coming to Australia. She’s kind, friendly, and watches me on telly – any time Home and Away isn’t on, that is. 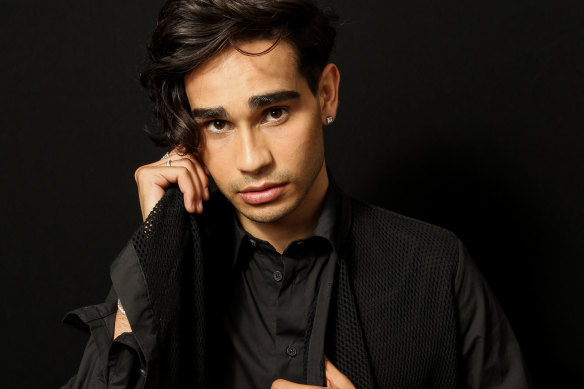 “There have been a lot of women, motherly kinds of people, who have taken me under their wings.”

I was three when I went to live with my father, Wayne, in Moama, a small country town. I’ve never had that image of my mum, Donna, and Dad in the same house. Their divorce was finalised when I was around six.

I spoke with Mum over the phone, but I didn’t meet her in person until I was 12. It was a big moment for me; it was really special. She is a great friend and wants the best for me. Our bond can never be broken. We laugh a lot and tell jokes.

Mum is from Portland, Victoria, where I was born, on Gunditjmara Country. She’s told me about how, back in the day, missionaries operated there.

The Gunditjmara people are a very matriarchal kind of tribe. She is proud to be such a strong woman, and to be surrounded by so many strong women like my nan and aunties.

She talks about strength and me knowing where I’m from. When I tell her about an upcoming performance she says, “Be strong, with all your ancestral history behind you.”

For my children’s book Come Together, about First Nations people, I asked Mum about the Gunditjmara tribe’s totem – our totems are ancestors who’ve come back as animals. She told me it’s a yellow-tailed black cockatoo, which is wilarn in our language.

In our culture, male and female roles are defined. There are things men can’t do and things women can’t do. For example, women are forbidden to play the didgeridoo, as it brings bad luck.

I started singing in church when I was three. As I got older, I watched TV talent shows. Around 10, I began picturing myself as a singer. Three years later, I won local talent contests.

I was nine when one of my older sisters came to live with us. She bought Beyoncé’s I Am … Sasha Fierce CD. My dad is a devout Christian and he was very strict about the types of music we listened to. So at night, I snuck the CD into my bedroom and listened to it on my Walkman while I slept. I fell in love with the song Halo, which I sang for the 2016 X Factor final, and won.

My first celebrity crush was Ariana Grande, followed by Mariah Carey – I love technically great female singers. Growing up, I listened to Mariah’s song Hero. I was going through some tough times and it helped me stay strong.

I met my first serious girlfriend in Melbourne when I was 18, through mutual friends. I was new to the spotlight and I had a lot going on. Our relationship didn’t last long as I was young and immature, but I learnt a lot.

I met my partner, Stephanie, in Melbourne when she was 16 and I was around 18. Our paths crossed again earlier this year and a month later we went on our first date.

Stephanie’s Latina, with long brown hair and a beautiful smile. People say personality is the most important thing but you have to love the way your partner looks. The thing I love most is that she makes me laugh. I want to be with someone who makes life fun.

I’ve had amazing women in my life, going back to when I was 15 and won a scholarship to a singing school in Melbourne. Every Saturday I would make the six-hour round trip, but sometimes I wouldn’t have money to get the train home. The mums of my singing friends would help out.

There have been a lot of women, motherly kinds of people, who have taken me under their wings. They’ve supported me and wanted the best for me.

Come Together (Hardie Grant) by Isaiah Firebrace is out now.

Who? What? Why are we so fascinated with these celebrities?