Olivia Colman on playing royalty in “The Favourite” and “The Crown” Actress Olivia Colman, known for starring in several popular British TV shows, is getting global praise for her performance as Queen Anne in the historical dark comedy, “The Favourite,” for which she just earned a Golden Globe best actress nomination. She’s also set to take over the role of Queen Elizabeth in the third season of Netflix’s “The Crown.”

Queen Anne, who reigned in the early 1700s, has been largely forgotten by history.  By all accounts, she was a tragic figure – overweight, diseased and often, perhaps understandably, nasty.

But in the hands of Colman, Queen Anne may at last get the recognition she deserves – in Hollywood.

Correspondent Mark Phillips asked the actress, “Is it fun to play that kind of aristocratic, arrogant [ruler]?”

“Yeah, yeah, to play the person furthest removed from you is the most fun,” she replied. “You always find a little bit of you in everybody, I suppose. You sort of have to. You also have to find something that you like in everybody you play, which isn’t always easy.” 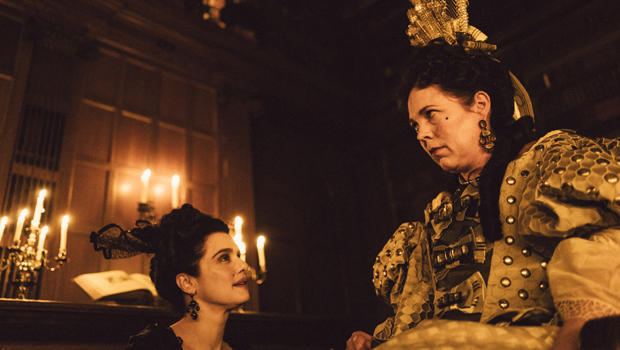 Rachel Weisz as Lady Sarah and Olivia Colman as Queen Anne in “The Favourite.”

Colman is a well-known and much-respected English actor but, until now, not an international star. She’s had major roles in TV series that developed followings in the U.S., such as “Broadchurch,” and most recently in the adaptation of John le Carré’s “The Night Manager,” where she played an unlikely spymaster to great acclaim.

But the awards she’s won for “The Favourite,” in which she stars with Emma Stone and Rachel Weisz, have brought her career to another level. She’s already won the Best Actress prize at the Venice Film Festival and the British Independent Film Awards, and she’s been nominated for a Golden Globe.

Phillips said, “It’s all tiptoeing towards the big award. Do you feel finally you’re getting the recognition that you deserved all along?”

“No. You couldn’t say ‘Finally!'” she laughed. “That sounds horrendous, but when that happens, when you get nominated for something, for me it always comes as a massive surprise … it’s really incredibly exciting.” 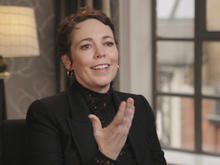 It’s probably not something she imagined when she began her TV career doing comedy sketch shows, starring in the BBC’s “Peep Show.”

But her life is about to take another dramatic turn. She’s been cast as the new Queen Elizabeth in the Netflix mega-series, “The Crown.” Claire Foy has played the young queen until now, but as the saga develops and the Queen ages, well, there’s only so much makeup can do.

So, it’s Colman’s turn to ascend to the throne – again.

“You seem to have cornered the market on queens lately,” Phillips said.

“There’s various things that make them different,” Colman said. “I think the only similarity is that queen is in their name, but apart from that, that’s it, that’s where it ends.”

Playing a living queen is a lot different than playing one who’s been dead for 300 years. 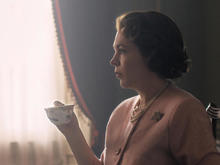 Olivia Colman as Queen Elizabeth II in “The Crown.”

“It’s almost like the die has been cast twice, once by the real Queen Elizabeth, and secondly by the actress who played the younger version of the queen. Does that limit what you can do with it?” asked Phillips.

“Yeah. I can’t play her Welsh!” she laughed.

“Can’t give her another accent?”

“No, I’ve really tried! But it is daunting, it’s the hardest thing I’ve done, I think.”

“Why, because of the responsibility of it, because it’s been defined previously?”

“Yea, because there’s much more ready-made critics, and there’s a thousand of them as opposed to, you know …”

Olivia Colman’s Queen Elizabeth in “The Crown” doesn’t stream until later next year. For those who can’t wait for their next royal binge, there’s always “The Favourite” in the meantime.