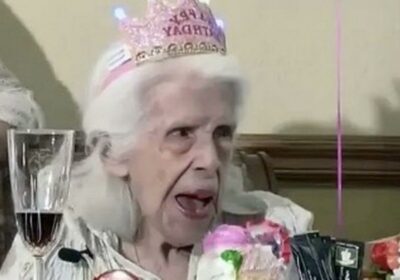 A 101-year-old woman is celebrating yet another birthday – and the secret to her long life is tequila.

Mary Flip, from Arizona, US, lived through a lot of things, including the Great Depression, wars and even pandemics.

She's also given birth to six kids so she's pretty much been through it all.

READ MORE: 'I cried after mum invited 40 people to her birthday party and no one came'

Now the pensioner credits the Mexican liquor as the secret to her long life.

Over the years, she's developed a fiery sense of humour as her daughter asked: "How do you feel?" and she replied: "With my hand".

Sadly she lost her mum and sister at a young age and has been on her own since then.

However, shortly after moving to Mexico, she met her husband.

The couple moved back to Chicago where she had her first child, changed careers and became a reputable artist recognised by the Chicago School of Art.

She told NBC 15: "I really like to draw. And I was able to figure out that things change even as you're drawing them. So, I was able to develop and make them look real. It took time but I had nothing else to do except raise a bunch of kids."

While speaking to reporters, Mary celebrated her birthday by treating herself to her favourite beer, Guinness.

As her family and friends danced around her, she joked: "Oh, I'll get up on the table."

It's no secret that tequila can be good for you, as even scientists recommend it.

It contains fructans – which is a molecule that acts as a fibre to naturally stimulate the production of insulin.

Insulin is a hormone which is made by the pancreas to allow your body to use sugar from carbohydrates in the food you eat for energy.

Tequila also lowers blood sugar and cholesterol, as it contains agave, which is a sugar from leaves, and it triggers the insulin production into the blood stream.

And when you're taking medication, tequila will help to protect the painkillers from stomach acid.

So, who's getting the next round of shots in?