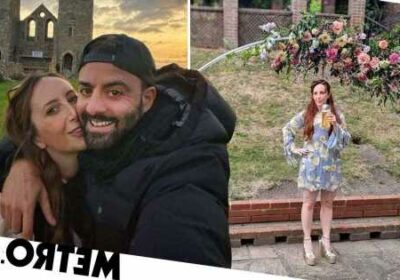 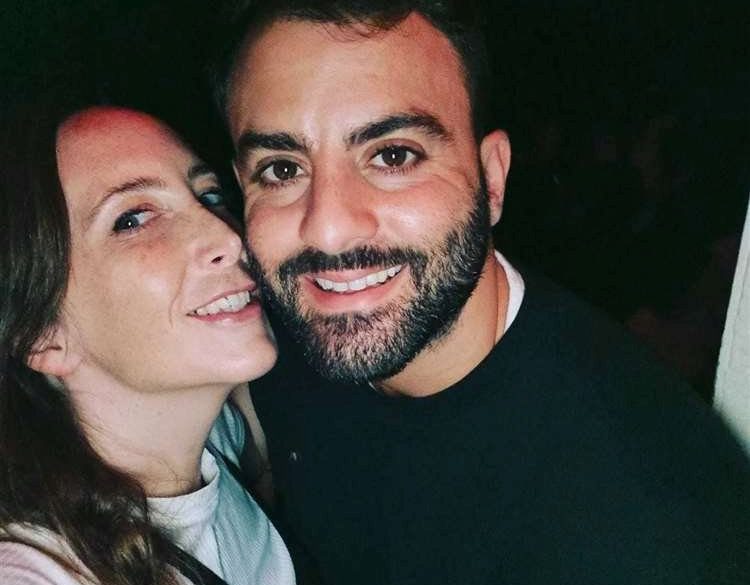 A nurse has told how she had to get married alone after visa delays kept her more than 4,000 miles from her husband.

Hazel Taylor, 38, was forced to celebrate her wedding without her new husband, Kareem Kowaitly, because of Home Office backlogs that meant he couldn’t fly into the UK.

Making the best of the situation, Hazel’s dad flew over from Australia and other guests came from Europe for what was supposed to be the couple’s big celebration, after they formally tied the knot in April.

Despite the heartbreak at Kareem missing the event, the bride drowned her sorrows with pints and tequila and put on a brave face, managing to ‘only cry twice’.

The couple met in Abu Dhabi when Hazel was working there during the pandemic, but there have been a number of roadblocks to their relationship.

Hazel said: ‘My plan was to work in Abu Dhabi for a year and save for a house deposit.

‘Then Covid happened, and it was bad from a travel point of view.

‘All of our leave got cancelled, we couldn’t travel and we got hit with mandatory overtime, but the one good thing was I met my husband.’

When the couple shared a holiday in Norfolk last year, Kareem proposed, and they decided to aim for a future in the UK.

Hazel was keen to head home to Gillingham, Kent, and thankfully were allowed to live together after a change in UK laws.

However, the pair were blocked from marrying in Britain because Hazel hadn’t lived in the country for the past six months. Because she’s no a Muslim, she was also not allowed to marry Kareem, 34, in the UAE.

They decided to head to Georgia to formally tie the knot – only for Putin to further threaten their plans.

‘We planned to get married and do the paperwork in Georgia and then have a wedding party in the UK very shortly after,’ explained Hazel. ‘But when everything kicked off in Ukraine we did the paperwork and got married early.’

A formal marriage ceremony (in front of a few cows) in Georgia in April followed, and the newlyweds hoped to have a larger celebration later in the year among family and friends.

Kareem, who is Lebanese and works for Abercrombie and Fitch, made his Spouse Visa application in May, and they both got to planning their dream wedding on September 3 at Commissioner’s House at Chatham Historic Dockyard.

Hazel said: ‘When we applied for a visa decision, the waiting time was 12 weeks. Our plan was that even if he got rejected, he would be able to get a tourist visa for the wedding, but we didn’t even get a decision.

‘The visa didn’t get processed in time – nothing happened at all.

‘My dad had flown over from Australia and other people had travelled from Europe, so we just had a party.

‘I made the wedding cake into cupcakes and turned the flower bouquet into a flower arch, and I drank lots of tequila.

‘I tried not to cry and think I only cried twice.’

When she contacted Gillingham MP Rehman Chishti, he told her waiting times had increased to 24 weeks.

A message from Mr Chishti’s assistant added: ‘The rationale for this is that in the mid-spring you had two crises impact the Home Office at the same time, that being an unprecedented surge in passport applications following two summers where international travel was difficult to impossible, and due to the demand for and the launch of the Homes for Ukraine scheme.

‘I can say on my part through May and June I raised many dozens of such cases with the Home Office, two hour queues on the dedicated Home Office lines for MPs were common as all other MPs were doing the same.

‘The Home Office moved substantial volumes of staff into these areas due to the substantial demand that grew incredibly quickly which came from other areas.’

Hazel has blasted the delays – saying her new husband has proof of savings, no criminal record, and a multinational employer which is happy to relocate him to the UK – which should lead to a decision being made quickly.

She added: ‘If it was a complex situation I would understand. It just seems unfair.

‘Ultimately I would love him to be in this country, but I know I’m not the only person in this predicament.

‘It doesn’t seem right. It was supposed to be a 12-week decision – to double that mid-way through the application seems really unfair. You’re so powerless.’

Kareem has still not received information about when he’ll be reunited with his wife, putting further plans on hold for the couple.

‘I had to relocate two dogs into a different county. I had to leave my husband with no possessions, no wife and no family,’ said Hazel.

‘We speak every evening, but he’s not here and life is at a standstill.’

A Home Office spokesperson added: ‘All visa applications are carefully considered on their own merits and we endeavour to consider them as quickly as possible.’