Home » Lifestyle » ‘No time for politics’: Housing ministers to meet to tackle affordability and homelessness

‘No time for politics’: Housing ministers to meet to tackle affordability and homelessness

First home buyers will be able to access the government’s Help to Buy scheme as soon as early next year, as the government works to bring state and territory governments together to tackle the nation’s widespread housing challenges.

The country’s housing ministers are meeting for the first time in five years on Friday, against a backdrop of high property prices, skyrocketing rental rates and rising interest rates. 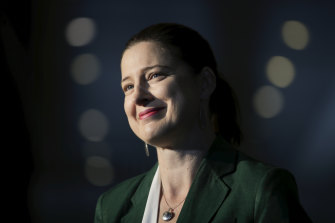 Housing and Homelessness Minister Julie Collins is holding a summit with state and territory housing ministers in Melbourne on Friday.Credit:Alex Ellinghausen

Housing and Homelessness Minister Julie Collins said she convened the summit so the federal and state governments can start working together to address the widespread housing challenges.

“Housing affordability has become a national issue, so this is about how we can work together,” she told The Age and The Sydney Morning Herald.

“All the state and territory ministers I’ve spoken to realise the seriousness of the situation. I think we all feel that there’s no time for politics, this is the time for people to work together.”

Labor’s shared equity scheme, which will see the government pay a portion of the deposit for 10,000 buyers earning under $90,000 or $120,000 for couples, will be in addition to the former government’s Home Guarantee Scheme that is open to 50,000 first home buyers, single parents and regional purchasers.

Collins said getting the legislation around the Help to Buy scheme finalised, passed by parliament and available to buyers by early next year was a priority.

“I’m doing everything I can to get all of our commitments up as quickly as I possibly can,” she said.

The home buying assistance scheme will be one of several topics up for discussion in the meeting on Friday, as well as the federal government’s $10 billion long-term investment in social and affordable housing and plans to form a national housing supply and affordability council.

“We want to help people get into the private market. But we also want to build affordable and social housing as well. So what this is about is providing Australians with options that best suit them,” Collins said.

The housing ministers will also start work on creating a national housing and homelessness plan, and Collins said having input from community housing organisations and private providers will also be important.

To help deal with housing pressures, the NSW government has flagged plans to move away from stamp duty and towards a land tax system, but asked for federal government support to do so as it would reduce the state’s cash flow. However, the federal government has no plans to compensate states for moving away from stamp duty and Treasurer Jim Chalmers said in June the reforms were matters for the states.

Collins said the federal government was coming to the table with a “very significant investment”, through its promised $10 billion Housing Australia Future Fund. The fund will be used to build 20,000 social houses and 10,000 affordable homes in the next five years.

“We want to work with the states and territories and community housing providers to get as many of those times on the ground as quickly as possible,” she said.

“It’s a very significant investment from a federal government – more significant than what we’ve had for some time.”