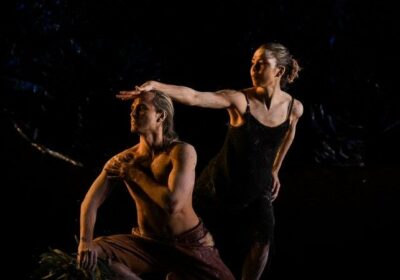 Bangarra Dance Theatre is back, with a new generation of dancers who are very, very good. They may well have contributed to the fresh spirit that pervades the remaining senior performers and the stalwart creative team who have come up again with different ways of presenting familiar themes. 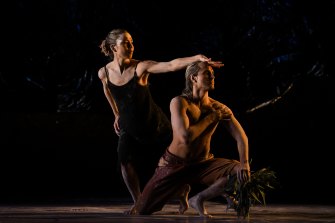 SandSong is set in the Great Sandy Desert and dedicated to the people of the Kimberley. It has a free cast sheet (as well as a full program well worth buying) that leads the audience through the stories being told in individual items, neatly dovetailed. These embrace life in the different seasons, kinship, the preparation of food and changes to Country as colonisers arrive, pushing the desert people into work as domestics and labourers. As the piece comes to an end, strength and resilience in kinship and ceremonies are reaffirmed.

Most of the dance is in ensemble groups, often divided on gender lines between the six women and nine men, but also in full cast sequences. An outstanding duet danced by Rika Hamaguchi and Baden Hitchcock breaks the mould with memorable impact.

Choreography by Frances Rings and Stephen Page – with a credit to the dancers as well – brings together the familiar stepping with angular limbs and curving bodies that twist as they turn.

There is more physical contact between the dancers than often in the past – for instance, between the men in strong gymnastic exchanges – and moments of conflict that add drama to repetitive dance that is sometimes in danger of going from mesmerising to monotonous.

Jennifer Irwin’s costumes move brilliantly with the performers, developing from natural elements like feathers and spinifex grass at the start to vivid street clothes at the conclusion.

Jacob Nash’s back cloth of shimmering crinkled material glows with whatever lighting (Nick Schlieper) is thrown at it, and with only minor changes sets the scene succinctly for individual items.

Steve Frances’ music, increasingly electronic, is full of character and retains a good balance with the dance.

SandSong is a thoughtful and well presented piece of storytelling, Bangarra style.