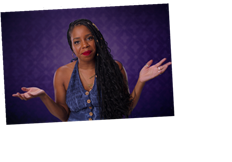 Netflix’s ‘History of Swear Words,’ the short comedic docuseries hosted by actor Nicholas Cage, comprises six different episodes centered around exactly what the title entails: the history behind some of the most popular four (and even five) letter words. Interestingly enough, two of the episodes briefly highlight the impact of Black culture, and even more so Black women, reclaiming those words and using them to our advantage.

The episode titled “B—h” explores some of the earliest examples of women empowering themselves with the b-word in music. Detailing how using powerful language, including curse words, freely in both conversation and song, was an important form of expression in the Black community as far back as the 1920s and ‘30s, the show introduces (or reintroduces) viewers to the legend that is Lucille Bogan.

Bogan was a classic Blues performer who splashed onto the scene in the roaring ’20s with risque and sexually explicit lyrics, classified under “dirty blues” music. Many of her songs have been recorded by other Blues and Jazz musicians, including BB King. Aas such, she’s considered one of the most influential Blues performers to have such lyrics committed to public records. A fun fact mentioned in the show is that the last line of The Rolling Stones’ hit song, “Start Me Up,” is a tribute to Bogan’s song “Till The Cows Come Home.”

From acknowledging Bogan’s impact on music during the ’20s, the show fast forwards to the resurrection of the reclaiming of the word with Hip-Hop in the ‘90s. Naturally, Queen Latifah’s “U.N.I.T.Y.” is the notable example due to the infamous lyric “Who you callin’ a b—h?”

We then jump forward in time again to the present and highlight Lizzo’s hit “Truth Hurts,” where she reclaims the title to highlight empowerment, and even some might say, self-love. It’s no secret that Black women in Hip-Hop have staked claim of the word for themselves and managed to make exceptional art from it.

Another episode in the docuseries entitled “P—-y” is, of course, self-explanatory. In the latter part of the episode, the focus of the word within music is brought up when discussing male rap groups of the ‘90s and their emerging content. As professor Mireille Miller-Young points out:

“While groups like 2 Live Crew, up through Ice-T, and NWA, were pushing the boundaries around censorship, they were absolutely being conventional and problematic when it came to oppressing women in their videos and in their music. And so it really took a huge revolution among the women… to be able to speak up and speak back to men.”

The series credits female rappers such as Lil Kim and Foxy Brown, among others, for taking control of the narrative and emphasizing that they were actually the ones in control, which still remains impactful to this day. To be expected, the episode also discusses the recent soul-stirring song that is “WAP.” When the song first premiered, it broke the record for the biggest 24-hour debut for an all-female collaboration on YouTube. It also incited praise from fans and fellow peers and conjured up outrage and criticism from conservative commentators. Either way, Black women continue to find ways to reclaim what’s rightfully ours, especially within the realm of music.

Although the series’ exploration of these empowering examples was succinct, it was important that Black women’s contributions were recognized. We continue to shape the narrative of our nation and that’s evident whether we’re talking about the b-word, ballots, or simply being Black.