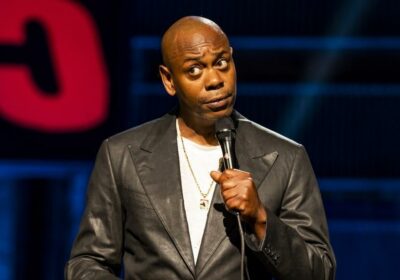 A new release from Dave Chappelle titled “What’s in a Name?” dropped on Netflix Thursday, consisting of a speech in which the comedian addresses the backlash he’s faced for transphobic material in his standup.

The 40-minute speech — which was released on Netflix without any prior announcement — took place at Chappelle’s alma mater, the Duke Ellington School of the Arts in Washington, D.C., during a planned ceremony to rename the school’s theater after him. The choice by the school was widely criticized due to Chappelle’s inclusion of jokes targeting the transgender community — particularly trans women — in his recent projects like 2021 standup special “The Closer.” Chappelle also had a combative Q&A with Duke Ellington students following the release of the special in November, during which many criticized him for failing to listen to the objections of the LGBTQ community regarding his material.

During the renaming ceremony, Chappelle announced that he decided against having the theater named after him due to the controversy. The Duke Ellington School ultimately named the space the Theater for Artistic Freedom and Expression.

“What’s in a Name?” captures the speech where Chappelle announced the theater’s new name. Chappelle mostly focused on describing his years attending Duke Ellington. However, roughly 30 minutes into the speech, he addresses the prior Q&A at the school, and defends himself from the controversy by claiming those who objected to “The Closer” weren’t looking at the special’s “artistic nuance.”

“All the kids were screaming and yelling. I remember, I said to the kids, I go, ‘Well, okay, well what do you guys think I did wrong?’ And a line formed. These kids said everything about gender, and this and that and the other, but they didn’t say anything about art,” Chappelle said. “And this is my biggest gripe with this whole controversy with ‘The Closer’: That you cannot report on an artist’s work and remove artistic nuance from his words. It would be like if you were reading a newspaper and they say, ‘Man Shot in the Face by a Six-Foot Rabbit Expected to Survive,’ you’d be like, ‘Oh my god,’ and they never tell you it’s a Bugs Bunny cartoon.”

Chappelle went on to say that the Q&A hurt him, claiming that the students’ objections to his material were attacking his “freedom of artistic expression.”

“When I heard those talking points coming out of these children’s faces, that really, sincerely, hurt me. Because I know those kids didn’t come up with those words. I’ve heard those words before. The more you say I can’t say something, the more urgent it is for me to say it,” Chappelle said. “And it has nothing to do with what you’re saying I can’t say. It has everything to do with my right, my freedom, of artistic expression. That is valuable to me. That is not severed from me. It’s worth protecting for me, and it’s worth protecting for everyone else who endeavors in our noble, noble professions.”

Chappelle concluded his defense by calling the teenagers who had criticized him “instruments of oppression.”

“And these kids didn’t understand that they were instruments of oppression. And I didn’t get mad at them,” Chappelle said. “They’re kids. They’re freshmen. They’re not ready yet. They don’t know.”