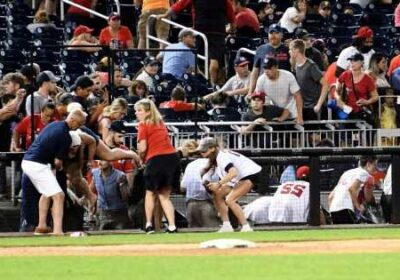 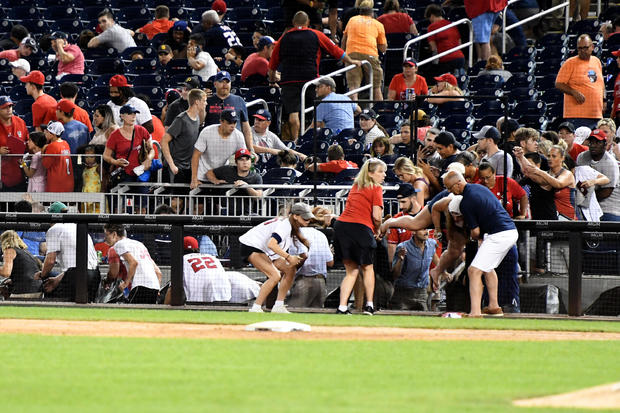 Saturday’s Washington Nationals game was suspended after a shooting that occurred outside the stadium led to a panicked scene with attendees ducking for cover and the teams retreating to their clubhouses. Metro Police initially said two people had been shot and later added that “two additional victims associated with this incident” were being treated for gunshot wounds at local hospitals.

CBS News congressional correspondent Kris Van Cleave, who was at the game, reports that the sound of gunshots could be heard inside the stadium and many in the stadium began running. Video from inside the stadium shows fans rushing for the exits, ducking between rows and some even running into the dugouts and clubhouses.

The shooting occurred prior to the start of the bottom of the sixth inning “outside of the Third Base Gate” of Nationals Park, according to the Washington Nationals.

Fans running for the outfield exit after a sound that could have been gunshots. pic.twitter.com/G8YXhfVhk8

Fans were initially told to stay inside the stadium. Later, they were asked to exit using the gates in center and right field.

The game between the Nationals and the San Diego Padres was suspended and will resume Sunday at 1 p.m. Sunday’s scheduled game will be played “within 25-45 minutes” of the conclusion of the suspended game. Both matchups will be full nine-inning games, with the first game picking up where it left off in the bottom of the sixth.

This is a developing story and will be updated as more information becomes available.