NADENE GHOURI: We gave Afghan women a glimpse of freedom 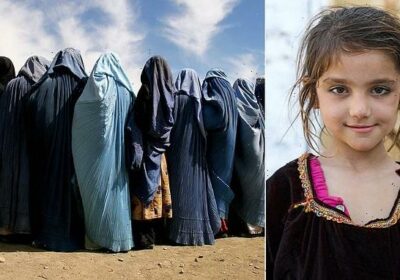 NADENE GHOURI: We gave Afghan women a glimpse of freedom. Now we MUST save them from the Taliban’s medieval maniacs

The desperate messages and emails keep coming… ten yesterday, 18 today, still more tomorrow – voicemails like this one: ‘Where are you, Miss? We are coming to kill you. Are you frightened?’

The intended victim, a female journalist, played it to me on Friday from Kabul. The Taliban are advancing on the city and now they have her private number. Like thousands of educated women there, she is terrified.

Today we are witnessing a battle for the very soul of Afghanistan – between modernity, enlightenment, democracy and a medieval world of extremism and barbarity. 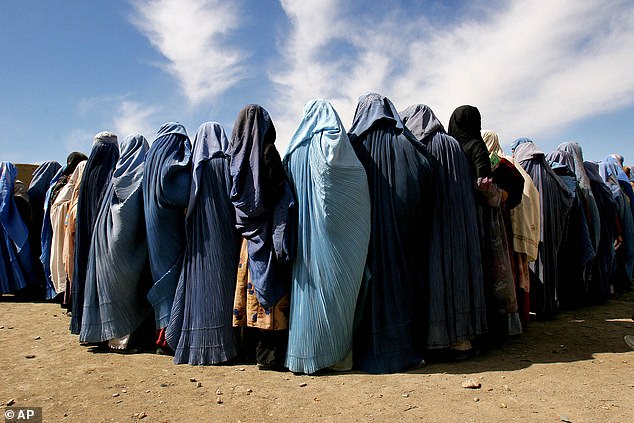 Women were forced into the hot, blue nylon burkas the Taliban demanded, barred from leaving their homes without a male relative, banned from being treated by male doctors – even though female doctors were not allowed to practise. (Pictured, Afghan widows wait for food to be distributed by CARE International in Kabul) 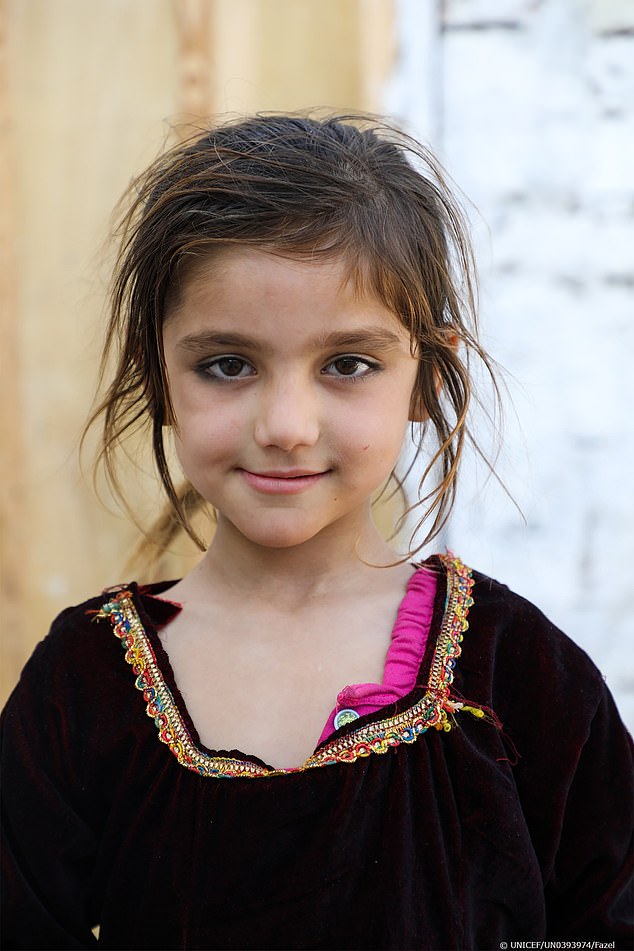 When six-year-old Nazdana from Kandahar was asked what she wanted to be when she grew up, she said a dentist.She is now in a camp in Kabul having fled the fighting 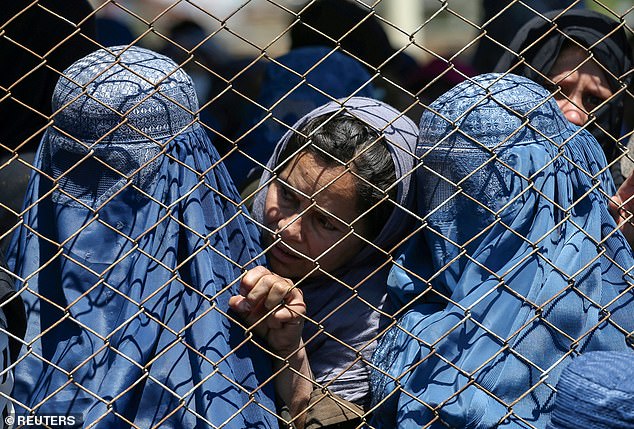 Women are not required to wear full face covering under the Afghani government, as they were under the Taliban, though many still do

The West knew this in 2001, when we first decided the Taliban must be stopped, and we know it now.

Yet this time we are walking away in the full knowledge of the disaster to come.

A leading female diplomat, Fawzia Koofi, is among those to be threatened. In 2020 she was nominated for a Nobel Peace Prize for her role as one of only three women representing the Afghan government at the recent – now failed – peace talks with the Taliban in Doha. She is one of my dearest friends.

Marooned in Kabul with her daughters, she is being hunted for the crime of being female.

She tells me: ‘I’m not frightened for myself but for my girls,’ her voice breaking. ‘This isn’t just about me. It’s about all the women of Afghanistan. Were women’s rights just a bubble on the water?’

Across Britain, anyone who knows Afghanistan is receiving similar desperate calls and emails. 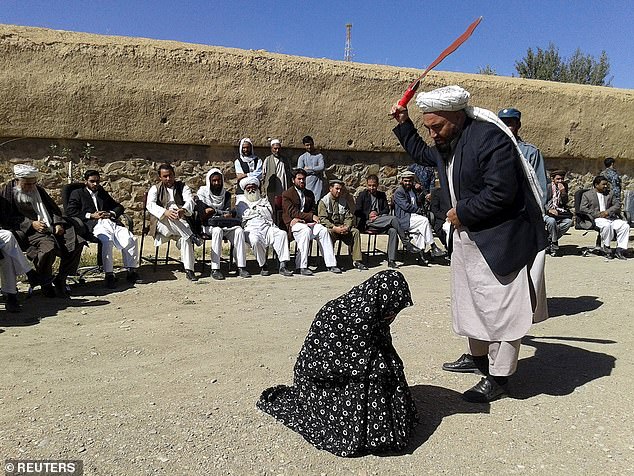 An Afghan judge hits a woman with a whip in front of a crowd in Ghor province, Afghanistan August 31, 2015 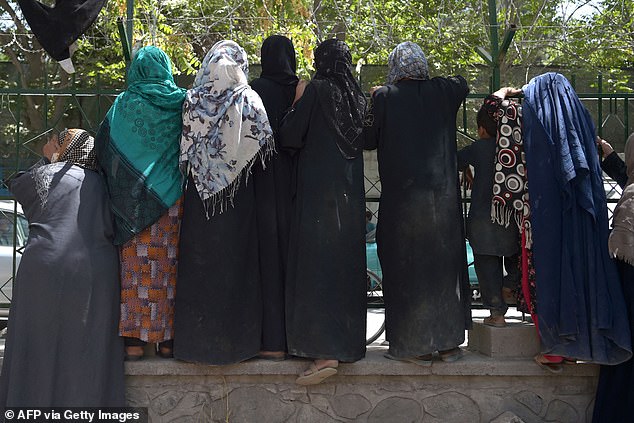 Internally displaced Afghan women, who fled from the northern province due to battle between Taliban and Afghan security forces, gather to receive free food being distributed by Shiite men at Shahr-e-Naw Park in Kabul on August 13, 2021

It’s a far cry from the day I arrived in Kabul in December 2001, just weeks after the Taliban had been forced from power by the Americans following the September 11 attacks.

Then, a dusting of fresh, white, powder snow covered the ground, matching the white hijabs worn by the little girls who now proudly carried their satchels to school, which was allowed once again. I watched them delicately navigate filthy open sewers and the shells of burnt-out tanks in streets which, just weeks earlier, had been the scene of brutal fighting.

The mood was euphoric. Every Afghan I spoke to was relieved the Taliban were gone.

During their six years of rule, they had taken the country back into the Dark Ages.

Women were forced into the hot, blue nylon burkas the Taliban demanded, barred from leaving their homes without a male relative, banned from being treated by male doctors – even though female doctors were not allowed to practise.

Television, music and photography were all banned.

But in those heady winter days of 2001, music began to blare from every cafe and taxi and Afghans gathered their families together for wedding celebrations.

But that, mind you, was in Kabul and a handful of urban centres such as Herat and Mazar. Elsewhere, especially in the remote rural south, little changed. There, the retreating Taliban fighters enjoyed widespread support – and still do.

For the Taliban, Kabul is the corrupt haunt of a metropolitan elite.

Afghanistan is as polarised as its broiling summers and freezing winters. Three-quarters of the country is barely habitable mountain or desert. Fifty-nine languages are spoken. Some remote villages remain three or four days by donkey from the nearest town. The Afghan government never reached them. They still have neither schools nor health clinics.

Southern Kandahar is the driest and most poverty stricken – and the traditional Taliban stronghold.

I spent five years in Afghanistan, working to promote a growing Afghan media. I trained political reporters in how to ask tough questions of their new government. No small thing for the trainee who’d been beaten on the soles of his feet with wire cable by his bosses on Taliban state radio for the ‘crime’ of making a mistake on air. I set up community radio stations in remote provinces and edited the first ever radio programme for Afghan teenagers, for which I recruited 12 young male and female presenters of different ethnic groups.

Manisha was one of them. Wearing jeans, with her hair in a trendy bob, she spoke three languages learned from a mother who’d run an underground school for her girls from the family basement.

Manisha embodied the face of a newly liberated Afghanistan. We actively recruited girls like her, believed in them and sold them the dream of a bright future. And now? To my shame and horror, Manisha is being personally targeted by the Taliban.

The people we have left behind are now in very real danger.

Diplomat Fawzia warns: ‘I fear the Afghan people now face a choice between the Taliban or a civil war.

‘I was a polytechnic student when the Taliban took control of Kabul in 1996. I watched as they burned books then set fire to the building.

‘Today my daughter is a political science student at Kabul university. I can’t comprehend this is about to happen again. Everything we have worked and fought for in 20 years is crashing down.’

The plight of women and girls is summed up in a widely circulating portrait of six-year-old Nazdana from Kandahar, now overrun by the Taliban.

Asked what she wanted to be when she grew up, she had said a dentist. She is now in a camp in Kabul, all such plans in ruins.

Retired Major General Charlie Herbert, a former commander of British forces in Helmand and a Nato adviser, is one of 45 senior military officers calling for more visas to be issued to those Afghans who served the Crown.

He is in direct contact with former interpreters and other staff, such as the gentle, kind man who tended the roses in the Nato garden.

The British Government is not offering visas to subcontractors, to back-room staff or those dismissed for minor reasons, but the Taliban aren’t making such distinctions. If caught, they will be killed.

And make no mistake, the wives and children of the army, police and aid workers, and anyone with connections to the United Nations or the government, are already being arrested and murdered.

Meanwhile, despite the risks to herself, Fawzia has been visiting the many thousands of internally displaced people who have fled other cities and now are now sleeping in the open-air picnic areas of Kabul’s leafy ornamental parks. She says: ‘Some of the women delivered babies while they were travelling, so they had little babies who were sick, they had no drinking water, no washing facilities. All the children had been in school. They have lost their futures. We need to immediately set up temporary schools and provide simple things such as sanitary pads and medicine.’ 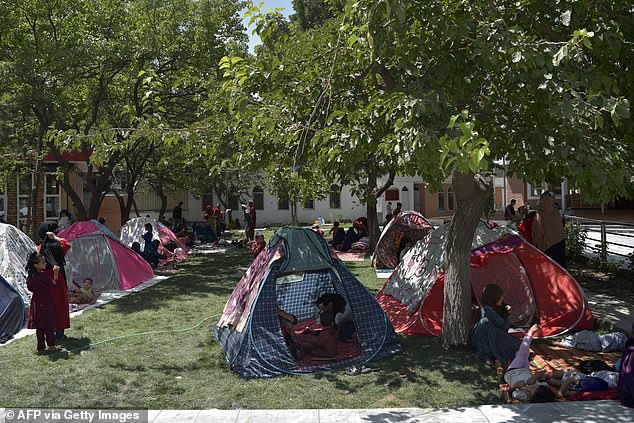 Internally displaced Afghan families, who fled from the northern province due to battle between Taliban and Afghan security forces

We cannot allow Kabul to fall and must send more troops before it is too late. The generation we’ve supported for two decades cannot be abandoned.

We must urgently step up humanitarian efforts to help those fleeing, especially women and children.

Fawzia, who cites Margaret Thatcher as her heroine, has already survived an assassination attempt. She has a message for the British: ‘To the ordinary readers, I know you have good intentions and have paid taxes that went to the people of Afghanistan. I hope you will continue to raise your voices in support of us and especially the women.

‘We were at the forefront of protecting democracy against military extremism and the values of humanity, equality and dignity. The same values the British represented for years.’

Hope is fading in Kabul as quickly as the city’s electricity supply.

Fawzia calls me less often to save her mobile battery, but she has instructed me that if the Taliban attack her house, she will try to call me and I am to record the attack and to broadcast it to the world.

I am praying it is a call that I do not receive.

●Nadene Ghouri is co-author of The Favoured Daughter, One Woman’s Fight To Lead Afghanistan Into The Future, by Fawzia Koofi.