Home » Lifestyle » My cocaine habit got completely out of hand

My cocaine habit got completely out of hand 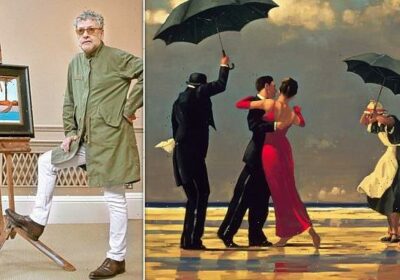 My cocaine habit got completely out of hand: As Jack Vettriano opens a new show, he reveals how drink and drugs nearly destroyed him

But while plundering both his imagination and his own tortured love affairs for his work has given Jack Vettriano fame and riches beyond his belief, he admits that embracing the louche aspects of life has come with a price.

Following the recent demise of ‘a very destructive relationship in London,’ he says, ‘I started to abuse substances. It cost me emotionally and financially. Everything got completely out of hand.’

He’s speaking today from his home in Nice, France, where he’s lived intermittently for the past 12 years. It’s been quite a journey from the Scottish mining town of Methil, Fife, where he spent his impoverished early years, but while success has given him ‘money and liberation’, it has also taken its emotional toll.

He gathers himself before revealing that he suffered problems with cocaine. ‘I never wanted to try anything else like heroin or ecstasy, because cocaine just hit the spot,’ he says.

Artist Jack Vettriano developed a drink problem after falling into depression when an injury to his shoulder seven years ago left him temporarily unable to paint. The Singing Butle pictured

‘It arouses your sexual appetite, but unfortunately it doesn’t give you the power to do anything about it.’

He also developed a drink problem after falling into depression when an injury to his shoulder seven years ago left him temporarily unable to paint. It was comedian Billy Connolly who attempted to help him, after Vettriano was commissioned to paint his portrait in 2017 for the comic’s 75th birthday.

‘We were going upstairs to my studio and I said, “You know you’re in trouble when you start drinking at lunchtime” and he looked at me and said, “Yeah, that’s not what you want to be doing, Jack” and I was touched by that. The thing is I never liked the taste of drink, I liked the effect it had on me.

‘But I was using all these things as an anaesthetic, it was taking away the hurt I was feeling. It was a little hard to get off, but I don’t think I ever had the credentials of an out-and-out alcoholic or junkie. 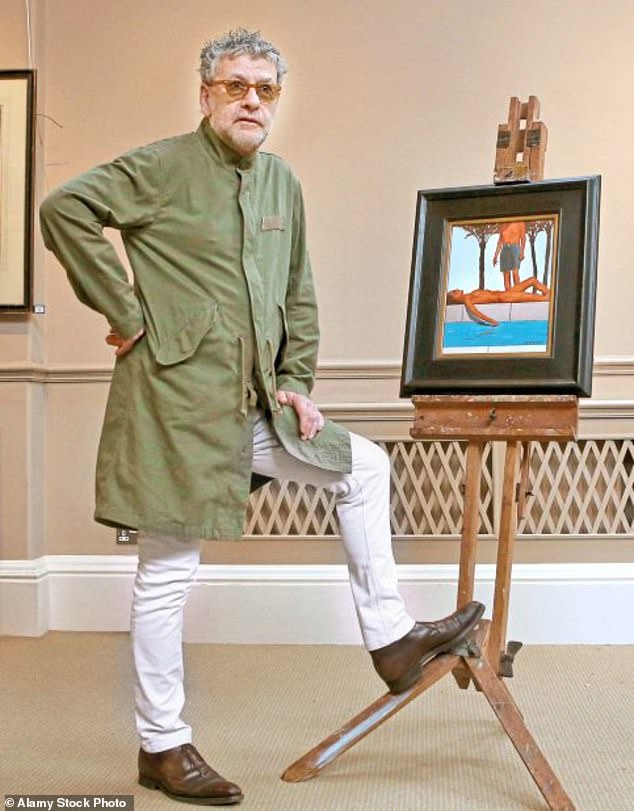 Jack (pictured) is arguably one of Britain’s most celebrated artists and an exhibition of his early work has just opened at Kirkcaldy Galleries, Fife

‘The alcohol and drugs just took the pain away for a while. It took me a while to realise that none of this was going to get me out of it and would only drag me down deeper.’

He was also put on anti-depressants, admitting in an interview last year it was because ‘I don’t know what’s going to happen to me’, which suggests he has felt suicidal.

‘No,’ he insists, ‘that was just the romantic and dramatic side of me coming out. I think many creative people need to be on some kind of edge – it inspires them.’

Jack Vettriano is arguably one of Britain’s most celebrated artists and an exhibition of his early work has just opened at Kirkcaldy Galleries, Fife, his first retrospective in nine years. A few of the paintings are signed with his birth name Jack Hoggan (Vettriano was his mother’s maiden name), when as a self-taught artist, ‘I’d make copies of Rembrandt a nd Monet until I developed my own style.’

Though his most famous creation, The Singing Butler, is one of his more genteel offerings, featuring a couple dancing on the beach as their butler looks on, it’s his racier works that draw the eye, often featuring older men with scantily clad young women.

A Very Married Woman features the subject fixing her hair dressed in her underwear while her lover mourns her impending departure. Fetish, meanwhile, has Vettriano himself gazing intently at a woman in stockings and stilettos.

In today’s febrile climate, is he surprised he hasn’t yet been cancelled? ‘No, because I think I touch a part of people – their desires – that they try to keep hidden.

‘An artist is bound by his own integrity so he must only paint what his heart dictates, and if I was starting out today I’d paint exactly the same things I do now.’ Many have accused his work of being misogynistic.

‘To them I’d say, “Take another look at it and you’ll see it’s the women who have the power.”’

While he enjoys widespread fame (Jack Nicholson and Sir Alex Ferguson are both collectors), the art establishment has tended to be sniffy about his work. He’s been described as ‘the Jeffrey Archer of the art world’ (not intended as a compliment) 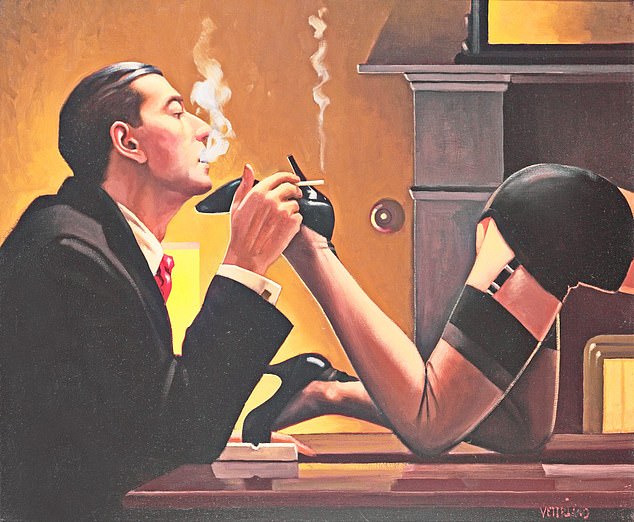 Vettriano’s work Fetish (pictured) has the artist, himself, gazing intently at a woman in stockings and stilettos

‘On a good day I don’t care about the criticism, on a bad day sometimes I do,’ he says. ‘But my stance has always been that places like Tate Modern and national galleries have a budget of taxpayers’ money, but do they try to please the taxpayer?

‘No. They please themselves because they think they’re endowed with knowledge that the common man can hardly be expected to possess. If they’re spending taxpayer money they ought to give them what the taxpayer loves and the taxpayer loves Jack Vettriano.’

He has a point. Reproductions of his work appear on everything from posters to mugs, with The Singing Butler even featuring on a Marks & Spencer biscuit tin, and he’s made £500,000 a year from reproductions alone.

But while he’s always been on the periphery of the art world, he appears not to mind. ‘I think art needs imagination and skill and what’s being produced now has neither.

‘I respect Damien Hirst but his formaldehyde sculptures [exhibited at the Tate] should have been in the Natural History Museum.’

To add to his bemusement, the art world is having its own crisis of conscience. Recently London’s Courtauld Gallery drew criticism for what one historian called ‘a woke attempt to call out misogyny’ by issuing a label for Manet’s A Bar At The Folies Bergère, highlighting the ‘unsettling’ presence of a man in the picture.

Vettriano sighs. ‘If The Courtauld put up that kind of notice, I’d want to tear it down,’ he says. ‘Art is subjective, so let the buyer beware.

‘Putting warning labels on stuff reminds me of a TV station in Scotland that plays The Benny Hill Show. They put up a sign saying, “This content is of its time so please turn off if you’re offended” and I think, “For ****’s sake!”’ He laughs.

‘The world’s going crazy. Personally I love the show. The women are in suspenders so I’m in heaven.’

When it comes to Jack Vettriano, talk of women (and suspenders) is never too far away. Women, sex and the games adults play are the driving force in his work and his personal life.

‘I think they always will be,’ he says. ‘But I’m 70 now, so the spirit is strong even if the body is weakened.’

The youngest of two sons, his father was a miner and Vettriano trained as an apprentice mining engineer in Fife after leaving school at 16. He married his wife Gail at 29 and adopted her daughter, Victoria, and even though ‘I lived in a nice house and had the Barbour jacket and deerstalker hat and pipe’, he turned his back on it all in his mid-30s to pursue his calling as an artist.

Vettriano’s parents were incredibly proud when he got his OBE in 2003. ‘I was so pleased to take them to Buckingham Palace because never would they have expected to watch me shake hands with the Queen,’ he recalls.

Indeed, one of his commissions was the Queen’s granddaughter, Zara Phillips, who he painted for Sport Relief in 2008. ‘She was so down-to-earth and I’ve nothing but kind words to say about her.

”After I finished she looked at her watch and said, “Right, I’ve got to go and see my granny now.”’

After an emotionally turbulent few years, he’s back on the right track. ‘I’m as clean as a whistle now and I feel so good.

‘My doctor tells me I’ve got 15 years ahead of me where I can work.’ He’s also single.

‘I feel much more at ease with myself. But that’s not to say I’m not on the lookout.’

Despite his enormous success, does he not at times wish he’d opted for a more stable life of marriage and kids? ‘A part of me feels like that sometimes,’ he admits.

‘But my life has only gone the way I pushed it. It’s not that I couldn’t live with anyone, it’s that no one could live with me because I’m too melancholic.

‘But I have no regrets. My life was transformed when I made that leap and while I paid a price for that transformation, it’s all in the game of life.’