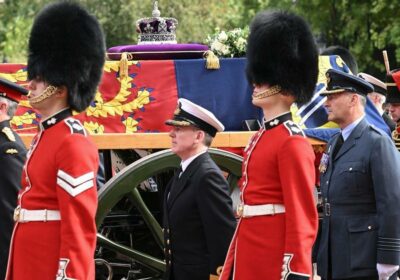 Queen Elizabeth II's coffin has now arrived at Westminster Hall, where it will remain for the next four days until her funeral, which will take place on Monday 19 September.

Her Majesty's coffin was conveyed via gun carriage from Buckingham Palace to Westminster Hall on 14 September, passing The Mall and Horse Guard's Parade in a procession.

During the journey, the band of the Scots Guards and the band of the Grenadier Guards performed a number of different marches, and the music that was selected holds special meanings.

The bands played Beethoven’s Funeral March No 1, a mournful piece which was played at the funeral of the Duke of Edinburgh, who passed away in April 2021.

It was also played at the procession to the lying in state of the Queen Mother and the funeral of King Edward VII.

This was followed by Beethoven’s Funeral Marches No 2 and 3. Funeral March No 3 was played by the band of the Grenadier Guards at Prince Philip’s royal funeral, held at Windsor Castle.

Many members of the Royal Family attended the procession on 14 September, which saw the Queen's coffin wheeled along The Mall on a gun carriage as the procession made its way to Westminster Hall in London.

Her grandsons Prince Harry, 37, and Prince William, 40, were both in attendance, along with their wives, Kate Middleton, 40, and Meghan Markle, 41.

The sun shone as the procession moved onto The Mall in central London and members of the crowd threw yellow roses into the road as the gun carriage passed them.

A crown was placed on a purple cushion on top of the coffin which glistened in the afternoon sunshine, alongside a wreath continuing numerous different flowers.

Behind the coffin, King Charles, the Princess Royal, the Duke of York and the Earl of Wessex followed on foot. And behind them came the Prince of Wales and the Duke of Sussex.

Also forming part of the procession were loyal members of the late Queen’s staff, including two of the Queen’s Pages and the Palace Steward, who walked directly in front of the coffin.

The Pall Bearers were 10 former and serving armed forces equerries to Elizabeth II, who were at her side in uniform throughout her reign, supporting her at engagements and organising her public diary.

This week, OK! celebrates the life of Her Majesty the Queen with a commemorative special in honour of Britain’s longest reigning monarch. Be sure to pick up your copy.