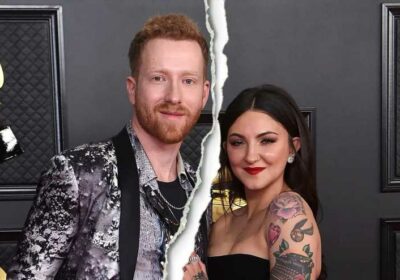 Is it over? Julia Michaels and JP Saxe have called it quits after three years together, source confirms to Us Weekly — and their own lyrics appear to prove it.

Celebrity Splits of 2022: Stars Who Broke Up This Year

The Canadian crooner, 29, sparked split speculation last month when he teased new music that appeared to be inspired by a breakup.

“When you think of me / Are you setting fire to every memory,” Saxe sang in an Instagram video published on August 30. “And do you believe what doesn’t last forever don’t mean anything?”

He continued: “’Cause I swear I loved you fully / And I’m sorry not for sustaining who we thought I’d be / When you think of me / Am I just another man who leaves.”

Earlier this month, the “Line by Line” musician doubled down on the emotional lyrics and again hinted that he and Michaels, 28, were over via social media.

“I hate myself for hurting you / But it would make it worse to fix it / I wish I figured out a way of keeping myself in it / Because I meant to be the man you were standing with / Not another tally line to justify your fear of abandonment,” Saxe shared in a September 15 Instagram post titled, “Verse 2.”

The lyrics are part of a new song, “When You Think of Me,” which comes out on Friday, September 23, and also detail a breakdown seemingly between Saxe and the Iowa native.

“And I hate how I lived up to your worst fears / Makes it worse how it worked so well for three years / And it could all be for the best in the end / But for now it feels like losing my best friend,” he concluded.

Michaels, for her part, shared an emotional video that same day of herself playing the piano and singing about her own heartbreak.

“’Cause you’re just another man and this is just another doorway / You’ll use the promises like they’re some kind of twisted foreplay,” the Grammy nominee sang in the September 15 clip. “You keep saying that you’re staying / When we both know that’s not your forte.”

The “Hurt Somebody” songstress captioned the video, “Assholes live forever” and appeared to detail the end of her and Saxe’s relationship. “You give me one last kiss and leave your keys there in the foray / You say you’re sorry [and] you never meant to hurt me like you did / Well, I’m sorry to me too,” Michaels belted out.

Another fan echoed Morris’ sentiments, praising Michaels for speaking her truth. “This is so pure and raw. I can feel your pain,” the social media fan wrote. “Sending you so much love my precious angel ❤️.”

Saxe and Michaels started dating after they wrote 2019’s “If the World Was Ending.” The twosome continued to work together, writing 2021’s “All Your Exes” and “Little Did I Know” off of Michaels’ Not in Chronological Order album, before parting ways.