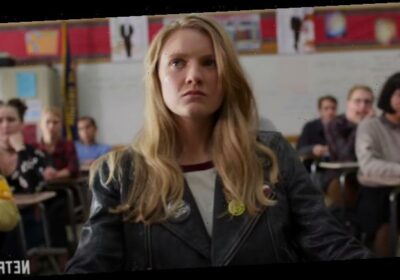 It seems inevitable that Amy Poehler’s latest directorial effort, Moxie, will invite some comparisons to Mean Girls, the 2004 teen comedy touchstone co-starring Poehler and written by her frequent collaborator Tina Fey. After all, both films are about teenage underdogs looking to upend the social hierarchy of their high schools with the help of a Xerox machine. This time around, though, the target isn’t the popular girls, but rather the patriarchy.

Poehler once again plays a “cool mom,” but this time around, that descriptor isn’t played as a joke. She’s a former teen punk who raged against the world in her day. Her daughter, played by Little Women‘s Hadley Johnson, finds a photo of her mom hanging out with seminal Riot Grrl band Sleater-Kinney. The Northwest’s Riot Grrl culture of the ’90s certainly has a big influence on the film: the trailer is set to the movement’s most recognizable anthems, Bikini Kill’s “Rebel Girl.”

Johnson’s character attends a high school where teenage toxic masculinity seems to rule. The popular boys keep detailed rankings of every girl in school on such metrics as “best ass” and “most bang-able.” The faculty seems either unequipped or unwilling to deal with claims of harassment. A transgender student, played by Josie Totah, is continually dead-named in the halls.

So, inspired by the Riot Grrl days, the girls decide to start a good ol’ fashioned zine named Moxie that rages against the patriarchy by naming names—and starts something of a classroom revolution. The film is based on the popular YA novel of the same name.

Yes, we can already tell that Millennial Twitter is going to have something to say about the film; we can see the think pieces now. But teen films aren’t meant for adults. Let the kids discover what a zine is. The film will arrive on Netflix on March 3rd.

Related: Lindsay Lohan Reenacting Mean Girls Lines Will Take You Right Back to 2004