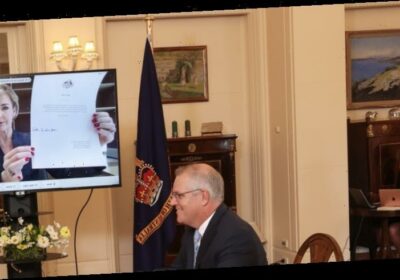 The women in Prime Minister Scott Morrison’s new-look ministry have been tapped to join a special ministerial taskforce to drive progress on gender equality and women’s safety, economic security and health and wellbeing, but they bring with them a mixed record on these issues.

Mr Morrison now has 11 women on his 42-strong frontbench, including a record seven in cabinet, or almost a third of these senior ministerial positions. His reshuffle on Monday was an attempt to reset as the government reels from weeks of revelations of sexual assault and harassment that were kicked off when former Liberal staffer Brittany Higgins aired allegations she was raped in Parliament House in March 2019. 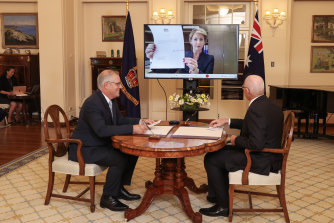 Michaelia Cash is sworn in to her new portfolio as Attorney-General.Credit:Alex Ellinghausen

Minister for Women Marise Payne now has an assistant in that portfolio, Amanda Stoker, while Anne Ruston adds women’s safety to her cabinet portfolio and Jane Hume takes on women’s economic security.

“For those who have experienced assault or harassment, it’s much, much more disturbing for them [to see reports of it every day] and they are the people we want to work for to make this better,” Senator Payne told radio station 2GB.

The scale of the task is highlighted by new polling done for Plan International, which found three-quarters of young women surveyed didn’t believe women in politics were treated fairly. Nearly three-quarters said they would never consider a career in politics.

Last week, new Home Affairs Minister Karen Andrews said she had had a gutful of sexist behaviour in politics and declared she would no longer stay silent.

She hinted childcare policy maybe “recalibrated” in May’s budget and is also keen to tackle what she sees as structural inequities in superannuation.

“It wasn’t invented with women in mind, it was built for a man who starts his career at about the age of 19, works without a break until 65 and then retires with a gold watch and his pension,” she said.

“I don’t want to front-run what might be in the budget but I know it’s an issue I feel particularly passionate about.”

Earlier this month, Senator Payne dumped a move Senator Hume was advocating to allow victims of domestic violence to dip into their super accounts to help them flee abusive relationships. Labor was highly critical of the plan, saying it would undermine women’s economic security in retirement.

Senator Stoker’s appointment as assistant minister for women has drawn fire from some quarters because of her strong anti-abortion stance. She has appeared publicly at pro-life rallies, including speaking out against the Queensland government’s 2018 bid to decriminalise abortion.

Last year, she said then-Queensland opposition leader Deb Frecklington “should not be playing the gender card” to defend her position and said women shouldn’t need to frame the challenges they face in politics through the lens of gender.

Michaelia Cash’s role as attorney-general puts her at the centre of the government’s response to Sex Discrimination Commissioner Kate Jenkins’ landmark report on workplace sexual harassment, [email protected] She has previously been the minister for women.

Labor accused Senator Cash of sexism in 2018 when, in a heated Senate estimates hearing, she threatened to “name every young woman in [Bill] Shorten’s office about which rumours in this place abound”. She later withdrew the remarks.