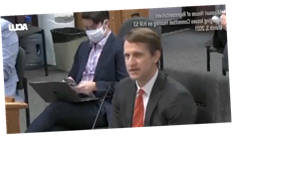 A dad from Kansas City, Missouri named Brandon Boulware has gone viral after testifying in front of the Missouri House of Representatives emergency issues committee. Boulware, the father of a transgender daughter, was there to ask lawmakers to stop discriminating against trans youth. His testimony was on March 3 – his daughter’s birthday.

Boulware introduced himself as a lifelong Missourian, business lawyer, Christian, son of a Methodist minister, husband and father to four children, “including a wonderful and beautiful transgender daughter.”

“Today happens to be her birthday. And I chose to be here,” Boulware said. “She doesn’t know that. She thinks I’m at work.”

MUST WATCH: Brandon Boulware, the father of a transgender daughter, testifies during a hearing asking Missouri lawmakers to stop discriminating against trans youth. pic.twitter.com/bTuSoyE1nW

The dad said, like many people, he didn’t immediately understand transgender identification, and would not let his daughter play with “girl” toys or wear “girl” clothes. “Why did I do this? To protect my child. I did not want my daughter or her siblings to get teased,” he said, also admitting he did it to protect himself, too.

He said this lead his daughter to be “miserable.”

“I can honestly say this – I had a child who did not smile,” Boulware said. After years of ignoring the advice of teachers and therapists, Boulware’s view finally changed when he saw his daughter in a dress. When he told her she could not go across the street to play at a friend’s house, his daughter asked if she could go if she put on boy clothes.

“It was then that it hit me, that my daughter was equating being good with being someone else,” Boulware said. “I was teaching her to deny who she is. As a parent, the one thing we cannot do, the one thing, is silence our child’s spirit.”

Boulware said it was then that he and his wife stopped “silencing” their child. They allowed her to grow her hair long and wear “girl” clothes. “It was a total transformation,” he said.

“I now have a confident, a smiling, a happy daughter,” Boulware said. “She plays on girls’ volleyball teams. She has friendships. She’s a kid.”

“I came here today as a parent to share my story,” he said, urging lawmakers not to pass a bill that would require “students who participate in sex-separated athletic contests only be allowed to participate in those for the biological sex found on the student’s birth certificate.”

If the bill becomes law, he said, it “will have real effects on real people.”

“It will affect my daughter. It will mean that she cannot play on the girls’ volleyball team, or dance squad, or tennis team,” he said. “I ask you, please don’t take that away from my daughter, or the countless others like her who are out there.” CBS News has reached out to Boulware and is awaiting response.

The ACLU posted video of Boulware’s testimony on social media Monday and it quickly went viral, receiving more 6 million views on Twitter than 300,000 views on the organization’s Instagram.

Many people reposted the video, including Dwyane Wade, who has a transgender daughter named Zaya. “I vote AGAINST this legislation!” the former NBA star wrote on Instagram on Monday. “I don’t know Brandon Boulware at all but I do know we have something real in common. Here’s the one thing we can’t do ‘SILENCE OUR CHILD’S SPIRIT.'”

The video was also posted by Jennifer Lopez, who tagged her transgender “nibling,” Brendon Scholl, who is her sister’s child. “I love… this touched me… a parents love… love changes the world,” she wrote on Instagram.

The Missouri bill has been presented to committees but a vote has not been set on the House calendar. Several other states have introduced similar legislation that would prevent transgender athletes from playing on a team with a gender they were not assigned at birth.

Another bill introduced in the Missouri House earlier this year would prohibits medical providers from administering any medical or surgical treatment for the purpose of gender reassignment for anyone under the age of 18.

Mississippi Republican Governor Tate Reeves signed a bill last week to ban transgender athletes from competing on girls or women’s sports teams. Mississippi is the first state this year to enact such a ban, after a federal court blocked an Idaho law last year.

Tennessee lawmakers are expected to vote on a controversial transgender sports bill, which will require students to prove their sex “at the time of birth” in order to play middle and high school sports.