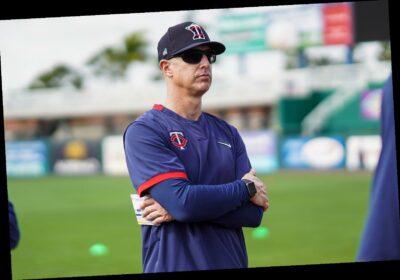 Minnesota Twins bench coach Mike Bell has died. He was 46.

Bell died Friday of cancer, the MLB team announced with a statement on Twitter.

"The Minnesota Twins are devastated by the loss of Mike Bell," the team said in its statement. "In his short time with our club, Mike had an indelibly positive impact — not only on the quality of our team on the field, but most importantly upon everyone whom he met."

Bell joined the Twins before the 2020 season after 13 years with the Arizona Diamondbacks. He previously played in the MLB, making his debut in 2000 on the Cincinnati Reds.

"Widely respected in our game, all who knew Mike, on and off the field, are better for the experience," the statement continued. "The Twins join the baseball world in mourning Mike's untimely passing; our thoughts and best wishes are with his wife, Kelly, his three children, Luke, Mikayla and Madeline, and the entire Bell family during this difficult time."

After he was diagnosed with kidney cancer during the baseball offseason, Bell underwent surgery in January, the team announced the following month.

At the time, the team said that he would be working remotely as he recovered, though his recovery timeline was uncertain.

"Mike was truly beloved by everyone who knew him — from coaches and players to colleagues and staff in Arizona and throughout our Minor League system," the Diamondbacks said in a statement Friday, according to MLB.com.

In addition to his legacy as a coach and executive for the team, Bell had been an original expansion draft pick in 1997.

"His loss leaves a huge hole in our hearts but his impact cannot be overstated and his legacy will not be forgotten," the Arizona team's statement continued. "Mike brought authenticity and positive energy to every interaction he had, both on and off the field, and he was a true leader in the game of baseball that has embraced his family for three generations. Our deepest condolences are with Kelly, his children, Luke, Mikayla and Madeline, and the entire Bell family."

Bell comes from a legacy MLB family. His father Buddy is a vice president and senior adviser to the Reds' general manager, and spent 27 years in the MLB as both a player and a manager, according to MLB.com. Bell's grandfather Gus played 15 seasons in the league, including nine seasons on the Reds.

Reds chief executive officer Bob Castellini in a statement: "Our Reds family is overwhelmed with sadness for the Bells as they mourn the loss of Mike. This great baseball family blessed thousands of people over the 70 years it has devoted to our game. We are honored that Mike, like his grandfather Gus, his father Buddy, and brother David, wore a Reds uniform. Our hearts and support go out to Buddy, David and their families."