Former First Lady of Somaliland, 82, recalls harrowing night her mother paid a friend to perform barbaric FGM on her when she was 8 – while her family looked on ‘joyfully’

‘I can still remember the pain more than seven decades later, and I live that moment over and over again each time I think about it.’

At the age of eight, Edna’s mother and grandmother paid for a friend with no medical training to perform the gruesome ritual on her, without any anaesthetic.

As she lay on the floor in shock, bleeding profusely and sobbing, the women who’d witnessed the primitive, savage operation celebrated her ‘purification’. 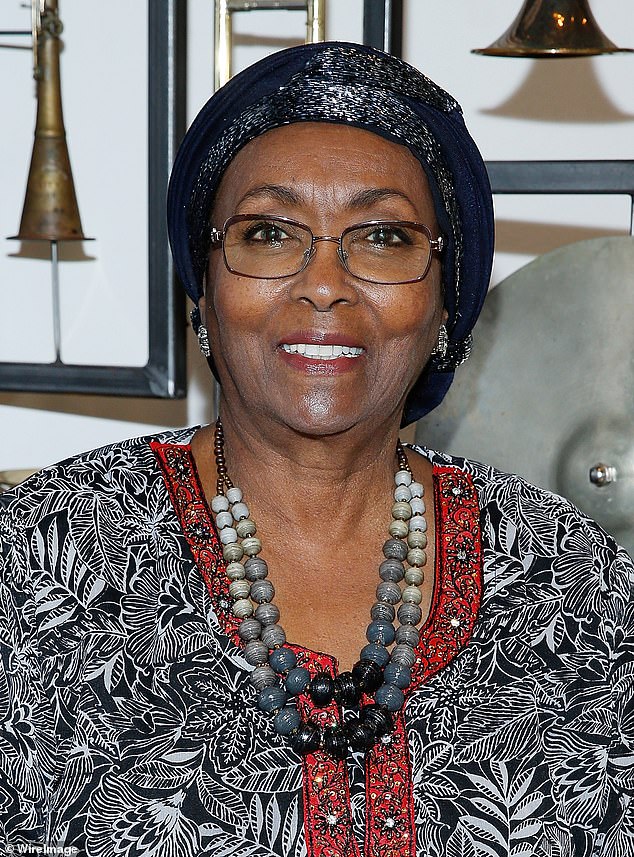 Now 82, Edna has penned a memoir which describes the ordeal in graphic detail, in an attempt to educate the world about the practice still performed on three million girls a year in Africa.

Speaking to FEMAIL, Edna said she felt a ‘responsibility’ to share what happened to her and tell the world ‘exactly what FGM entails’.

‘It’s far more serious than people understand, and far more damaging than people expect it to be,’ she explained.

‘The world doesn’t understand how much tissue is cut away. People equate it to male circumcision, where a foreskin is removed, but there is no organ amputated. 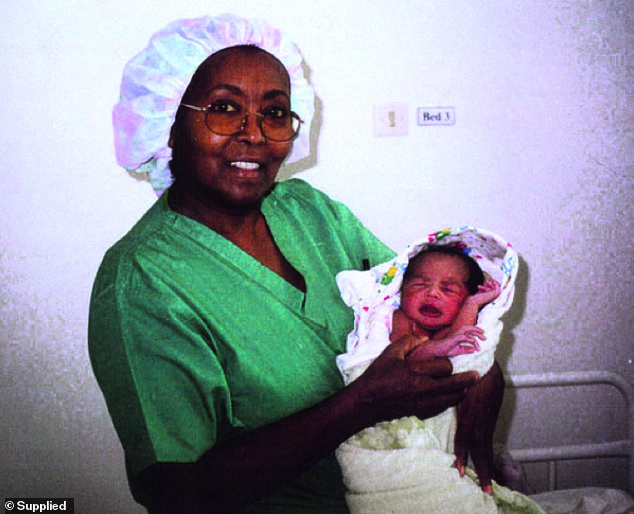 Edna, a trained midwife, said she felt a ‘responsibility’ to share what happened to her and tell the world ‘exactly what FGM entails’

‘FGM entails so much more excision, so much more bleeding, more pain, and then there’s the consequences resulting from the FGM which remain with the woman and can affect her future life, having children and the way she brings children into this world.’

In her book, appropriately titled A Woman of Firsts, Edna recalls the ‘well planned operation’ to perform FGM on her as a child, that relied on ‘speed and surprise’.

She remembers screeching in pain as an old woman squatted before her and started cutting between her legs.

‘I could feel the knife slashing through the sensitive flesh of my private parts and the stickiness of my blood as I screamed and struggled,’ she writes. 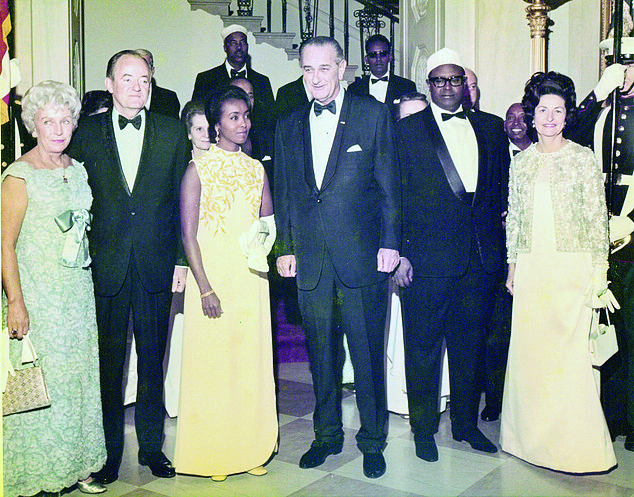 Edna, pictured in 1968 at a banquet at the White House for her then-husband Prime Minister Egal and the delegation

‘My mother and grandmother watched my ordeal but neither came to my rescue. They just stood there, ululating joyfully.’

Edna tells how she believes she passed out before waking up when the woman stitched her wound together with acacia thorns using string ‘like a shoelace’. 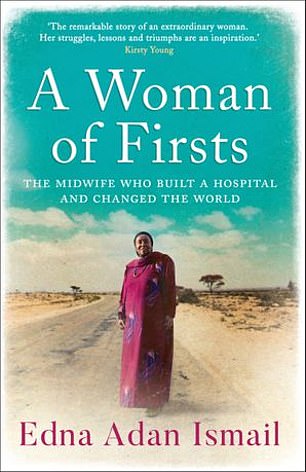 In her book A Woman of Firsts, Edna recalls the ‘well planned operation’ to perform FGM on her as a child

‘The pain was excruciating,’ she remembers. ‘In what felt like a living nightmare, my legs were then bound all the way up to the thighs and hips.’

After she was lifted onto a disposeable mat designed to soak up her blood, Edna recalls how the woman sprinkled a mixture of herbs, sugar and raw egg yolk onto her open wound to form a crust, telling her ‘eggs will make you fertile and sugar will make you sweet’.

‘Now that I’m a nurse, I can’t help but think that the mixture was a perfect medium to enable bacteria to grow, plastered onto an open wound by a woman with dirty hands, a dirty knife, using dirty rags,’ she writes.

‘It was so gruesome at the time, and it is still gruesome to recall.’

When her father, a doctor, returned home – her mother and grandmother had secretly planned the procedure for when he was away – he was furious.

Seeing his anger gave Edna courage and made her realise what had happened to her ‘wasn’t right’ – though she admitted it took her 70 years to ‘come to terms with it’ and to be able to say it to the world.

‘That’s how difficult it was,’ she told FEMAIL, adding that she debating taking out this disturbing chapter from her book. 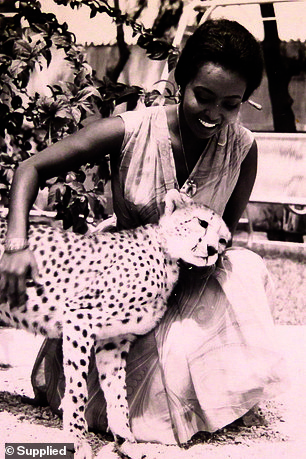 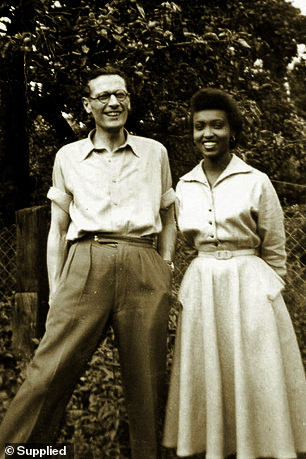 Edna, pictured with her ‘Cheetah baby’ Sanu who was killed by soldiers after the 1969 Marxist Revolution (left) and aged 17 in London where she lived with Mr Rogers and his family 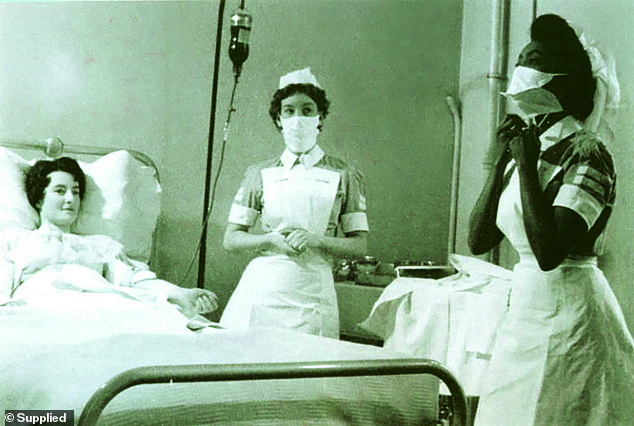 Edna, pictured far right in her third year as a student nurse at the West London Hospital

‘But then I thought, what’s the point of writing something if I don’t write what I feel I should write? If somebody is going to stick their neck out, then my old neck is ready for the guillotine, so be it.’

Despite her FGM taking place in 1946, Edna said the procedure is still carried out in countries like Somaliland as primitively now as it was then.

‘Where do you think people in rural villages are going to get anaesthesia from?’ she pointed out. 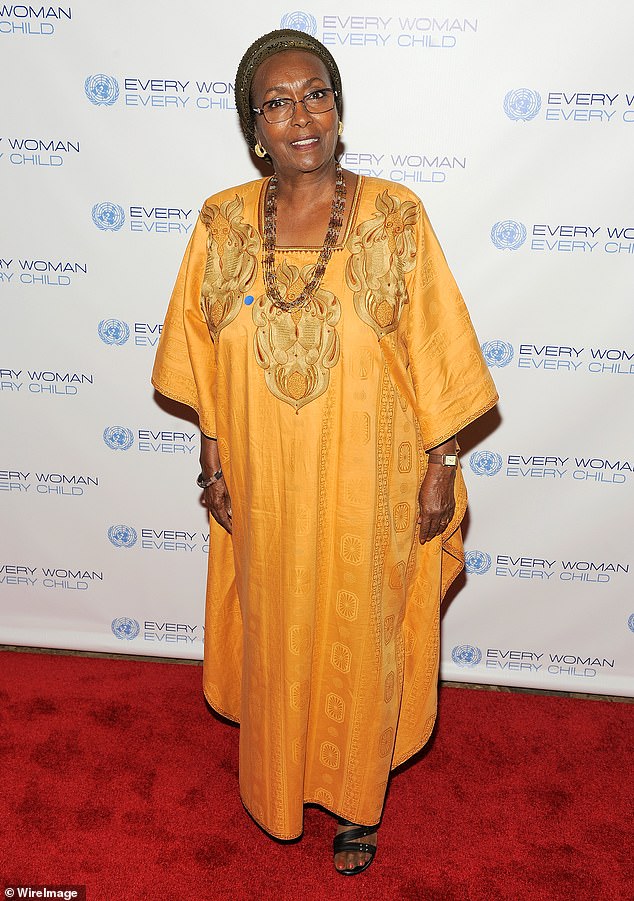 Despite her FGM taking place in 1946, Edna said the procedure is still carried out in countries like Somaliland as primitively now as it was then

‘A country that is denied political recognition, with health services being put together after 11 years of civil war with neighbouring Somalia.

‘That’s how it happens. It is gruesome, but that’s why we have to say it must stop.’

What is female genital mutilation?

The UN estimates that over 200 million girls and women have experienced FGM, which is a life-threatening procedure that involves the partial or total removal of a woman’s external genitalia.

Girls aged 14 and younger represent 44 million of those who have been cut, most commonly in Gambia, Mauritania and Indonesia.

The procedure is mostly carried out on young girls between infancy and age 15.

Once girls have been cut, they are deemed ready for marriage and taken out of school – but FGM causes health problems and can be fatal.

It is practised by both Muslim and Christian communities and by followers of some indigenous religions. People often believe FGM is required by religion, but it is not mentioned in the Koran or Bible.

In 2012 the United Nations General Assembly adopted a resolution on eliminating FGM, but it remains legal in certain African countries including Mali and Sierra Leone.

The practice is illegal in the UK, but according to figures it’s thought around 137,000 girls from Britain are taken to countries that still perform the procedure.

Somalia has the highest rate of FGM in the world, with the procedure carried out on up to 98 per cent of women.

Though FGM has been illegal in the UK since 1985 and is considered a form of child abuse, as many as 100,000 women and girls in the country are estimated to have undergone it – but a fraction of that number have disclosed it.

NHS England statistics show that 1,015 FGM cases were newly recorded between April and June last year, although the procedures may have been performed many years before.

In countries where it is still regularly performed, Edna pointed out one of the main issues is its ‘glorification’.

‘It’s peer pressure, the ones who haven’t gone through it say, “Why have we not been purified? Why am I unwanted, why am I being denied this?”

‘It’s glamorous. That’s why we need to educate young people, young parents, and not glorify the procedure. We must call it what it is – damaging and mutilating.’

Inspired by her father Adan, one of Somaliland’s best-loved doctors, Edna taught herself to read at the age of seven and became the first girl from her country to win an educational scholarship in Britain.

There she trained as a nurse and later became the first midwife to practise in Somaliland.

She married Mohamed Haji Ibrahim Egal, who was Head of Government in British Somaliland five days prior to Italian Somalia’s independence and later the Prime Minister of Somalia (1967-1969) and President of Somaliland in 1993.

After divorcing in 2002 Edna married twice more, but her dedication to her work always took precedence over her ‘duty’ as a wife, so much so that she’s been dubbed the ‘Muslim Mother Theresa’ – something she described as a ‘great honour’. 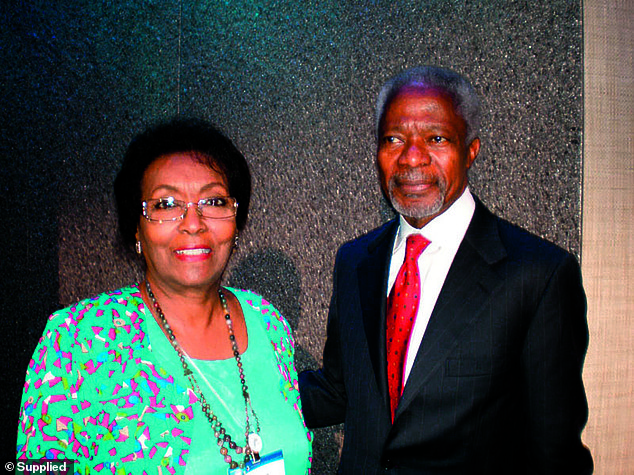 Edna, pictured with Kofi Annan, former Secretary General of the United Nations at the Clinton Global Initiative in 2011

Edna also dabbled in politics; she was the only woman minister in the Somaliland government until July 2006, when she was replaced as Foreign Minister by former Minister of Information and National Guidance Abdillahi Mohamed Dualeh.

She also worked as a senior figure in the World Health Organisation.

In March 2002 Edna fulfilled her childhood ambition of building a hospital from scratch, and she continues to run it and work there to this day.

The Edna Adan Maternity Hospital is built on land donated to her by the regional government at a site formerly used as a rubbish dump. 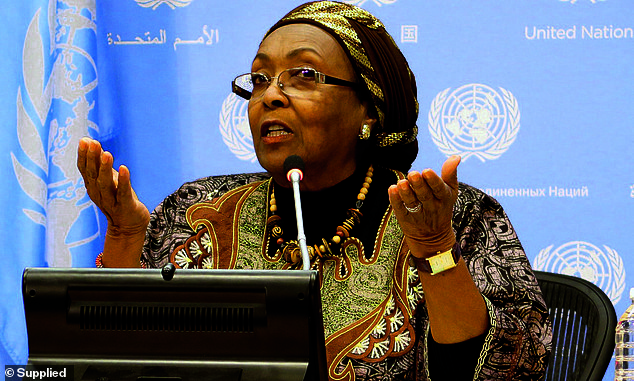 Edna’s work is supported by charities in the UK and USA. Pictured addressing a session on FGM at the United Nations in 2015

Prior to its completion, Edna recruited and trained 30 candidates to work there; Somaliland lacked trained nurses as most had fled the country or been killed during the bloody civil war in 1981.

The non-profit making hospital now has two operating theatres, a laboratory, library, computer centre and a complete wing dedicated to training nurses and midwives, with a staff of around 200 and 1,500 students.

Edna never had children, having tried for many years with Mohamed, and said FGM could be ‘one of many’ reasons she was unable to become a mother. 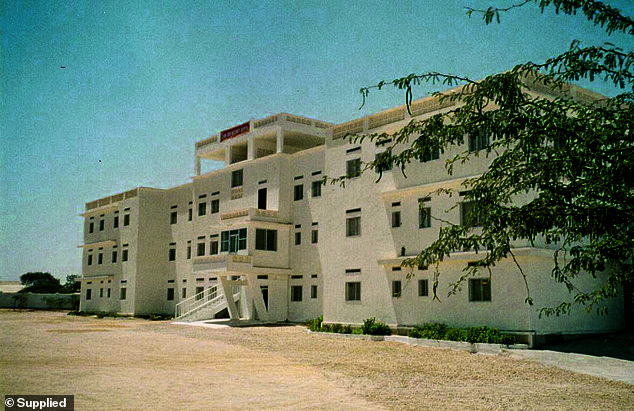 ‘The body of a woman is created in such a way that the tissues have elasticity that allow the birth passage to dilate and allow the foetus to pass through it and be pushed by the contractions of the uterus in a rhythmic way.

‘But when there is scar tissue, scar tissue is not elastic and is rigid and will not allow that baby to smoothly pass through the birth canal, causing the birth to be delayed and the baby to be asphyxiated – if it remains there long enough it will die.

‘Parents should know that and think about that, and fathers must pick up the fight and protect their daughters. As head of the family, they should have a say in this.’ 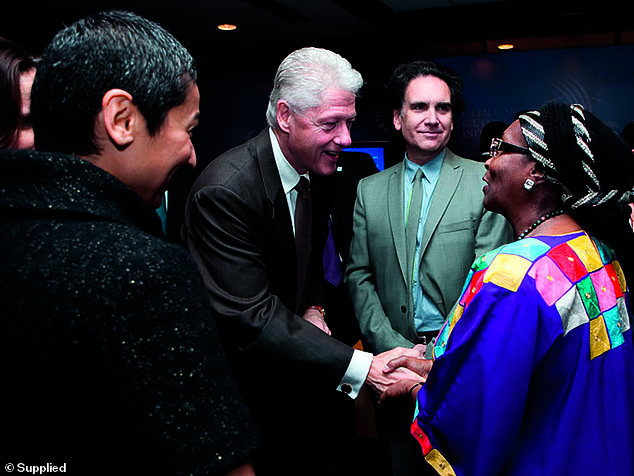 Edna was one of the first to speak out against FGM in Africa, and has since delivered TED talks and campaigned world-wide against the practice.

Her work is supported by charities in the UK and USA which help her raise support and awareness to train additional midwives and continue to fight FGM in Somaliland.

Despite her advanced years, Edna revealed she has no plans to slow down.

‘My brain works, why stop?’ she said. ‘Why give up and stop doing what I’m doing?

‘If it’s doing good, helping women and children and fight the practice of FGM, why stop? I’ll go on doing it for as long as I can.’

A Woman of Firsts by Edna Adan Ismail is published by Harper Collins (£20 hardback) and available now.