Home » Lifestyle » Meet Bunny, the TikTok famous ‘talking’ dog, who uses buttons to speak to her owner. Scientists are observing her to learn more about our pets secret lives.

Meet Bunny, the TikTok famous ‘talking’ dog, who uses buttons to speak to her owner. Scientists are observing her to learn more about our pets secret lives. 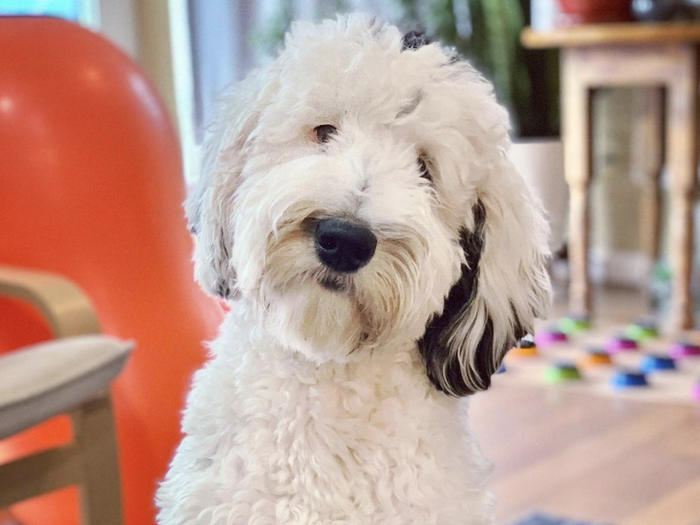 On a sunny July afternoon, Bunny — a 1-year-old Poodle mix —had just returned from a walk with her owner in Tacoma, Washington. As she often does, Bunny was hovering around her language board, eyeing up the sound-making buttons.

The black-and-white dog then pressed a button, which immediately sounded the word "mad." "Why mad?" asked Alexis Devine — Bunny's 40-year-old owner. The dog then moved to press the 'ouch' button. Devine, skeptically, proceeded to ask: "Where is your ouch?"

After a few moments of hesitation, Bunny walked over to a new button. "Stranger," it chimed. Soon after that, she sounded the 'paw' button.

She called over her pet and began to examine Bunny's foot. To her amazement, lodged in between Bunny's toes was a foxtail – an invasive cluster of grass that can penetrate the skin of dogs and occasionally requires surgery.

"When Bunny told me 'stranger, paw,' I knew that there was a foreign object there. I was able to look and remove it before it required medical attention," Devine told Insider.

Devine isn't the only person amazed by these human-like 'conversations' between a pet and its owner. 5.7 million people now follow Bunny's TikTok account, commenting their astonishment at the dog's apparent ability to communicate.

Quickly, Bunny and Devine built a dedicated fanbase. Just a month after setting up the account in June, they had accumulated over one million followers and tens of millions of likes.

Bunny's early viral videos show the Sheepadoodle using a handful of simple buttons to communicate with Devine. In them, Bunny presses 'love you' and 'outside' in an attempt to converse with her owner.

Christina Hunger, a speech therapist from San Diego, is credited with being the pioneer behind this innovative way of getting pets to communicate. Having been inspired by her work doing speech therapy with toddlers, she was eager to see if dogs could also similarly express themselves with words.

Writing on her blog, Hunger said: "When I brought my new puppy Stella home, I realized she demonstrated many of the same pre-linguistic communication skills as toddlers do right before they start talking, which is when I was struck with an idea!"

Hunger's idea was to start using an Augmentative and Alternative Communication (AAC) board with her dog. The AAC device is an organized 'hex board' of interlocking tiles, featuring various individual buttons that represent and vocalize specific words.

Relatively quickly, her two-year-old dog started using the device to sound out words and even seemingly form phrases up to five-words-long.

Devine, astonished by Stella's progress, "devoured" Hunger's blog and purchased a couple of simple buttons for Bunny to try out. "I added a few more buttons with velcro to a plywood board and then kept on expanding," she told Insider.

It was after that she decided to broadcast Bunny's progress on social media. Devine was then contacted by a cognitive scientist who approached her about an AAC prototype that was now being produced by FluentPet.

In exchange for the AAC board, Devine agreed to have Bunny monitored by a team at the University of California, San Diego.

The prototype was delivered and numerous cameras were installed around her living room to monitor Bunny's behavior.

The research uses a scientific approach to determine whether, and if so, how and how much animals can express themselves in language-like ways.

Rossano, a linguist who had studied non-human communication with primates, was skeptical when first approached about the study.

Six months in, he's astonished by some of his team's observations. Rossano told Insider: "What we've seen is that once the dogs understand several buttons, they're able to begin producing multi-button combinations. We're already seeing six-button combinations, which is, to be perfectly honest, more than I expected."

Bunny, the star of the project, is one of 1300 dogs participating. "We also know that several dogs are using over 20 buttons," he added.

Rossano continued: "It's very exciting to see and we're now trying to determine to what degree those multi-button combinations are systematic."

This isn't the only observation that has taken the TheyCanTalk team by surprise. One discovery wasn't even modeled for in the initial experiment but suggested that dogs might have an intellect that far exceeds current expectations.

"There are several instances we've seen in the data set where you have dogs referring to things they're not familiar with using expressions that appear to convey some productivity abilities," Rossano explained. "This is when dogs find ways to refer to things they don't specifically have words for in a creative way."

Bunny has demonstrated an ability to do this in many of her  TikTok videos.

Devine said: "One time on the beach, we saw a baby seal. Bunny was wagging her tail and looked so curious. When she came home, she pressed 'water' and 'hippo."

She continued: "Then, another time, we were walking in the park and saw a deer on our trail. She came home and pressed 'cat' and 'hippo.'"

Rossano reflected on this, telling Insider: "This is really creative. Bunny is using a combination of words that capture the features of an animal's appearance. She's trying to find ways to refer to things she doesn't have the words for in a creative way."

Another area that sparked the TheyCanTalk team's interest is the "clarity" with which dogs seem to be able to share their emotions. Rossano said: "There are some dogs sharing their emotional view, whether they're mad, happy, or in pain."

"We didn't expect the kind of clarity that seems to be emerging in some of these situations," he added.

This finding, according to Rossano, is potentially momentous. It could have a "humongous" impact on animal welfare and how we look after our pets.

"For me, a lot of the research is about trying to understand animal cognition to show that these animals are smarter than we have previously thought. They have emotions, abilities, experiences, and a life that is worth acknowledging," he said.

Rossano continued: "Many animals are underappreciated for their intelligence and because of that, we do things to them that we shouldn't be doing —  inhumane things. Through this study, we're trying to enhance the wellbeing of dogs by making their needs more understandable to humans."

Devine agrees. "I think there are some people who think of their pets as some sort of fluffy potato," she said. "If after this research people can start looking at their animals as these sentient creatures with complex cognitions, it could completely change our relationships with animals. I think that would be wonderful."

Taking part in the study has also changed Devine's relationship with Bunny. "I think this has really strengthened our bond," she said. "Bunny's a miraculous little creature."