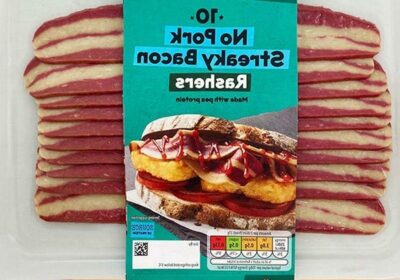 Meat eaters are fuming with Aldi over what the supermarket has called its new vegan bacon.

These days it doesn't take a lot to rile people up – so the supermarket's social media team have been inundated with not-so-happy messages about its latest product.

People fumed after the brand announced it is bringing out vegan bacon – with many meat-eaters saying it shouldn't be called bacon.

The plant based product will set you back £2.19 for 10 strips of the meat-free bacon.

It also clearly states on the packaging it is part of its plant menu and is made with pea protein.

After an advert was posted for the bacon, many followers simply couldn't get their head it.

One vented: "Call it something else. Bacon is a cut of MEAT. Simples."

Another said: "Hi I am sorry if it is meat free then it is not bacon."

There was one commenter who particularly let it ruin their day.

The snowflake commented: "If it's not meat then it's not pork, beef, chicken, bacon etc! It needs to be called streaky rashers only.

"It's as laughable as The Vegetarian Butcher!

"Each to their own, if you want to be vegetarian- that's fine but manufacturers need to stop using meat related words to advertise their products."

There were some who adored the bacon though.

"Thank you Aldi!" commented one.

They continued: "Really enjoyed this and you get more and cheaper than the other player that does meat free bacon!