Network 10's The Masked Singer will film its finale on Tuesday night – more than two weeks after a COVID-19 outbreak halted production of the popular reality show.

Just hours before the final episode was due to shoot last month, a crew member tested positive to the virus, forcing the immediate shutdown of the Docklands Studios set and almost 300 cast and crew to self-isolate for 14 days. A total of 17 infections have been linked to the production. 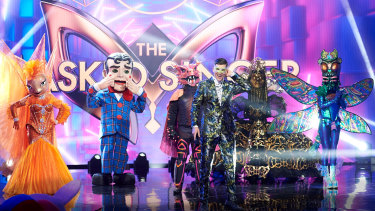 The finale of The Masked Singer will be filmed on September 8, more than two weeks after a COVID-19 breakout shut down production.

Producers will wrap filming of The Masked Singer's current season on Tuesday evening, albeit not in the way they'd initially planned.

With cast and crew eager to see their families after being quarantined in Victoria for 14 days, producers allowed Sydney residents – including host Osher Gunsberg and judge Jackie O – to return home as long as they tested negative at the end of their isolation period.

While a NSW Health spokeswoman confirmed that these individuals were not required to self-isolate again in NSW, comedian and judge Urzila Carlson wasn't so lucky. Having just returned to New Zealand, where she lives with her wife and two children, she must now complete a further 14 days in quarantine.

But this won't stop her appearing in The Masked Singer's finale.

From her hotel room in Auckland, Carlson has dialled in to the taping of the last episode via a video program on her laptop. Gunsberg and Jackie O are filming inside a Sydney studio while judges Dave Hughes and Dannii Minogue have returned to the show's Melbourne set, where the remaining elaborately-disguised contestants (Queen, Bushranger and Frillneck) are battling for the top spot.

"I have been so proud of how the cast and crew have rallied together to get this finale filmed," said Network 10's head of entertainment, Stephen Tate.

"The team have been able to replicate The Masked Singer set in the Sydney studio and of course we have made a few creative adjustments, all of which you will see on air. The lengths everyone has gone to to ensure this finale will maintain its production integrity and, best of all, its entertainment value has been extraordinary." 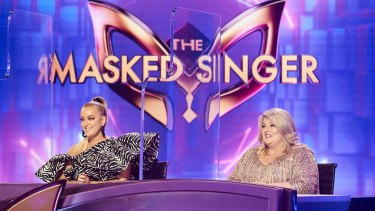 Judges Jackie O and Urzila Carlson will be filming the finale remotely, from Sydney and New Zealand respectively.

In lieu of a studio audience this year, Tate asked a panel of Masked Singer "superfans" to watch live recordings from their homes, then vote for their favourite performers. Around 1000 of these fans, all of whom signed non-disclosure agreements, participated in the current season.

A shortage of studio space in Sydney, where The Masked Singer filmed its first season in 2019, prompted a move to Melbourne this year but social distancing requirements forced producers to scrap plans for a live audience.

Initially, they intended to assemble the show's fans inside a Sydney theatre, beam a live feed of the tapings to them, then splice their reactions into each episode. When growing infection rates in NSW compelled them to abandon this idea too, producers opted to fill the audience seats inside the Melbourne studio with large stuffed animals and a few crew members in costume.

The sight of a giant teddy bear giving a standing ovation to a contestant dressed as a cactus, Tate says, suits the zany nature of The Masked Singer.

"I think production has done a superb job of maintaining the feel and atmosphere of a live studio audience," Tate said. "Having the stuffed animals and crew dressed up as animals created a fantastic mood for all the cast and crew."

Under normal circumstances, of course, Tate wouldn't choose to film The Masked Singer's finale across three locations in two countries. Fortunately for him, many of the show's hosts are accustomed to remote broadcasting.

Hughes has hosted his Hit Network drive program from Melbourne while former on-air partner Kate Langbroek dialled in each day from her home studio in Italy; Jackie O's long-time radio partner Kyle Sandilands has co-hosted their KIIS FM breakfast show from Los Angeles on occasion; and Carlson has recorded episodes of 10's Melbourne-made quiz show Have You Been Paying Attention? remotely.