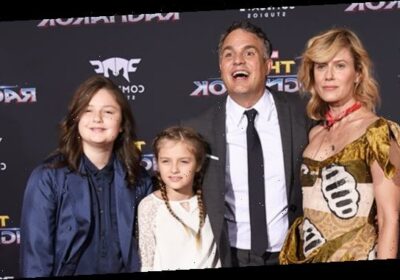 Mark Ruffalo’s kids, 19-year-old Keen and 15-year-old Bella, hopped behind their dad as he delivered his acceptance speech for ‘Best Performance by an Actor in a Limited Series’ at the Golden Globes!

Mark Ruffalo‘s kids decided to share their famous dad’s limelight during his acceptance speech at the 2021 Golden Globes! The Feb. 28 event was virtual this year due to the pandemic, meaning the 53-year-old actor had to accept his “Best Performance by an Actor in a Limited Series” award for playing twin brothers in the film This Much Is True from home. This gave the Avengers star’s teens Keen, 19, and Bella Noche, 15, the opportunity to crash their dad’s speech…which they took!

After Mark’s name was called, his son Keen jumped into the frame to celebrate. Then, as Mark delivered his passionate speech by the side of his wife, Sunrise Coigney, their two older kids hopped back into the frame to share the celebratory moment. Twitter freaked out over the wholesome moment.

Despite the lighthearted moment, Mark used the spotlight to share an incredibly important message for the Golden Globes viewers. “Let’s turn the page on the cruel past of this nation. The good news is inclusion and justice and care for Mother Earth is breakout out everywhere. The godly light of decency is breaking through the hideous, dark storm we’ve been living through,” the actor for “The Hulk” urged fans.

While the Hollywood Foreign Press Association awards the most prestigious shows, films and actors/actresses every year, that doesn’t mean celebrities try to bring some lighthearted fun into the annual event — just like Mark’s kids did tonight! Just look at Ricky Gervais: the famous comedian boldly took jabs at Judy Dench, James Corden and the movie Cats (which both Judy and James starred in) during his monologue at the 2020 show.

And then there have been Tina Fey and Amy Poehler‘s many on-stage routines throughout the years. During one of these hosting gigs in 2015, Amy poked fun at the fact that George Clooney was receiving the lifetime achievement award despite the fact that his wife, Amal Clooney, has an impressive career as a human rights lawyer.

Stars don’t always use the spotlight to crack a joke, however (like Mark). During his opening monologue at the 2018 show (amidst the #MeToo Movement), Seth Meyers put aside his usual jokes to call out high-ranking Hollywood figures like Harvey Weinstein and Kevin Spacey who had been accused of sexual misconduct.