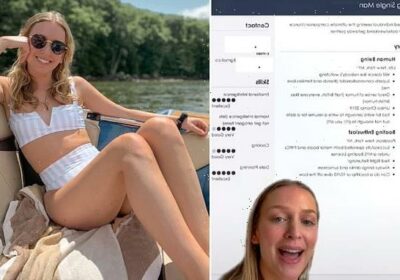 Man mocks up hilarious fake RÉSUMÉ to apply for a date with his Hinge match, listing qualifications like ‘great sense of humor’ – prompting her to set up a formal ‘first round interview’

One promising sign someone might be a good romantic match? You commit to each other’s comedy bits.

Two single New Yorkers certainly went all-in on one particularly funny bit after meeting on the dating app Hinge, with the man drawing up an entire fake résumé to apply for the position of the woman’s date.

The résumé listed his qualifications, including that he ‘will dance like nobody’s watching’ and is a ‘superb converationalist.’

Keeping up the fun, Blonde Broke & Bougie finance influencer Becca, 28, replied with an appropriately formal response, inviting her match, Damien, to meet her for a first-round interview.

The pair continued the witty back-and-forth right up to the date itself, with the man even pretending to be his own assistant to confirm the details. 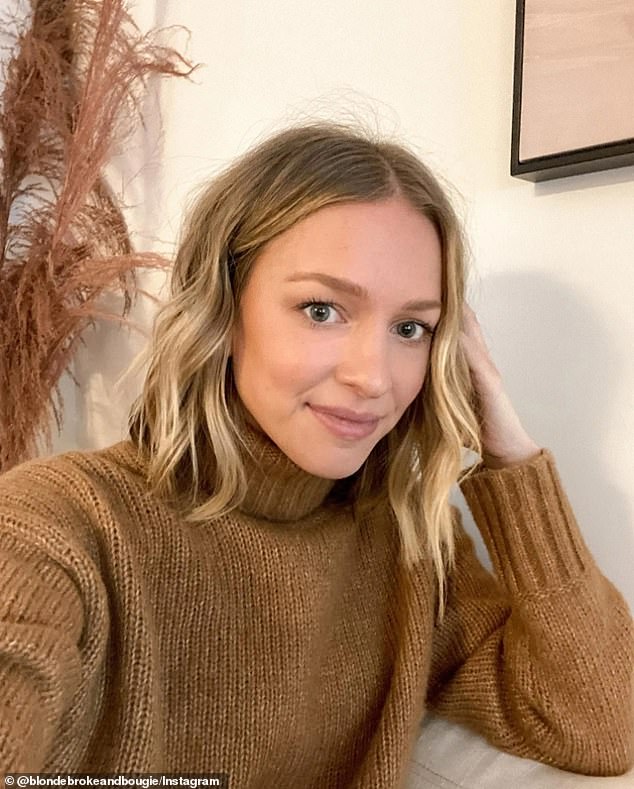 Becca, 28, says in her Hinge profile that she has a boat – prompting one match named Damien to ask what he needed to do to get invited on it 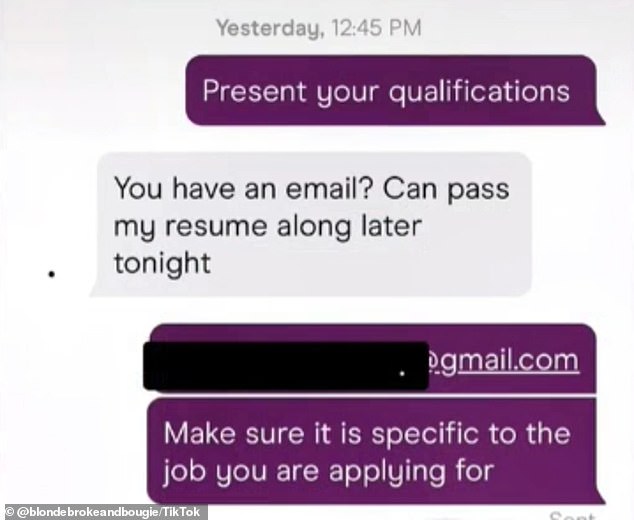 When she told him to share his ‘qualifications,’ he asked for her email address – and sent her a résumé

Becca shared details of the the banter she shared with Damien in a viral TikTok video, which has racked up nearly a quarter of a million views in under 24 hours.

‘So I went on a Hinge date last night and the lead up to this date was amazing and it needs to be shared,’ she said.

In her profile, Becca mentions that she has a boat — she tells DailyMail.com that it’s her family’s pontoon boat in the Catskills — and Damien opened their conversation by asking, ‘What do I need to do to get invited on this boat?

‘You have an email? Can pass my résumé along later tonight,’ Damien wrote back.

Becca admitted on TikTok that she was hesitant to give him her email address, but decided, ‘on the off chance that he actually sends a résumé, this would be hilarious. So I did give him my email.’

She responded with the address, telling him, ‘Make sure it is specific to the job you are applying for.’

‘The next day,’ Becca explained, ‘much to my surprise, I get an email from him, totally commited to the bit, with a résumé attached.’

Damien continued to address her in a formal tone as if applying for a job.

‘Becca, Enclosed please find my résumé,’ he wrote. After careful review I believe you will find my qualifications exceed expectations and I would be the perfect fit for the position of Date/Guy To Invite On Your Boat.’

Becca included a screenshot of the man’s résumé, which he created just for her.

Under his name, he put the tile of ‘Charming Single Man.’ 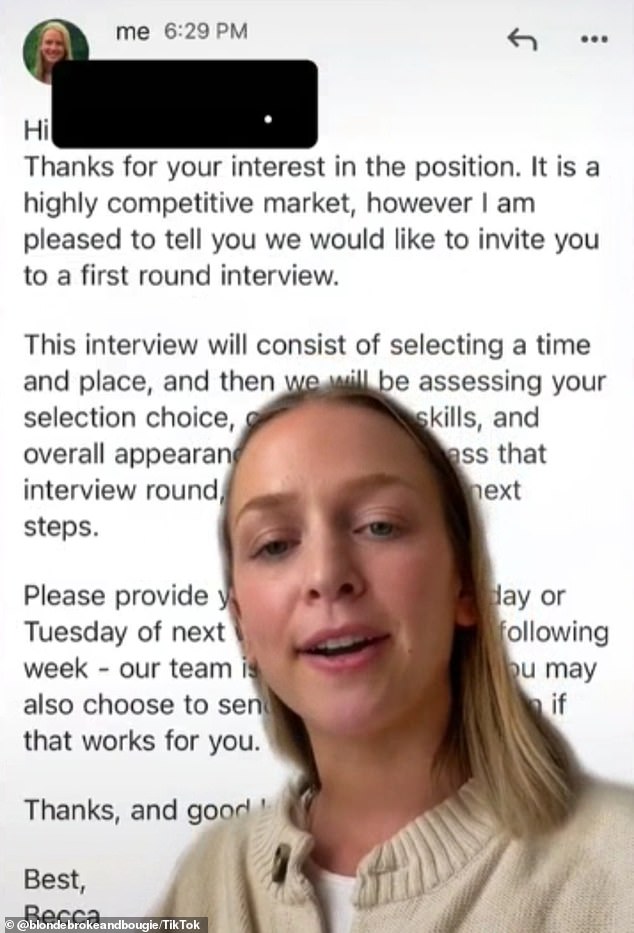 Sticking to the joke, Becca replied to set up a ‘first round interview’ for the position 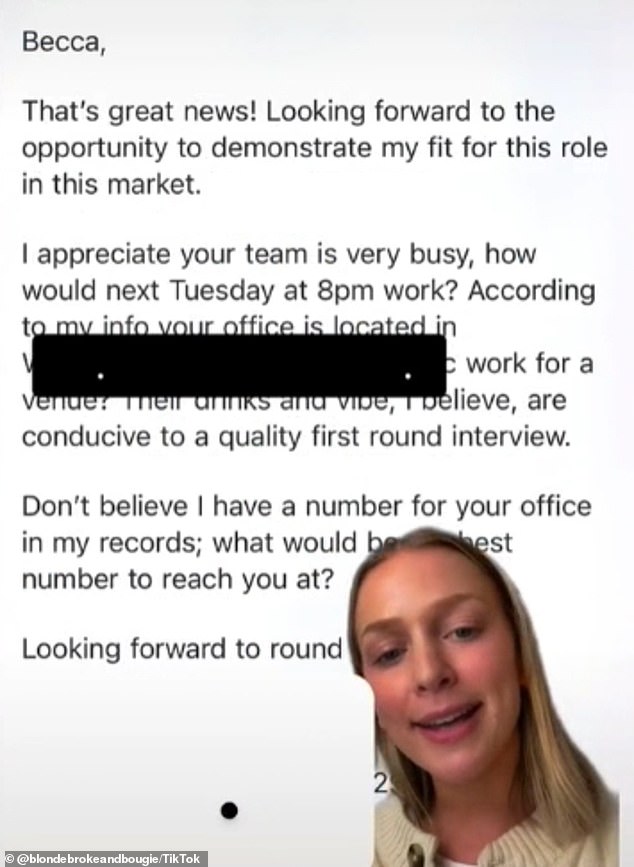 The pair went back and forth with formal messages, with Damien suggesting a place to meet

Under ‘Human Being,’  bullet points include ‘will dance like nobody’s watching,’ ‘superb converationalist (friends and families love me),’ and ‘great sense of humor (half British, everyone likes British humor.’

He also listed that he was Limbo Champ 2019 and is a ‘tad bit extra (enough to write a résumé for a date but not enough to p*** you off.’

Under ‘Boating Enthusiast,’ he wrote that he’successfully operated both motor boats and PWCs under a NYS Boating License,’ ‘always brings drinks and sunscreen,’ and ‘can do a backflip or 10/10 dive off the bow.’ 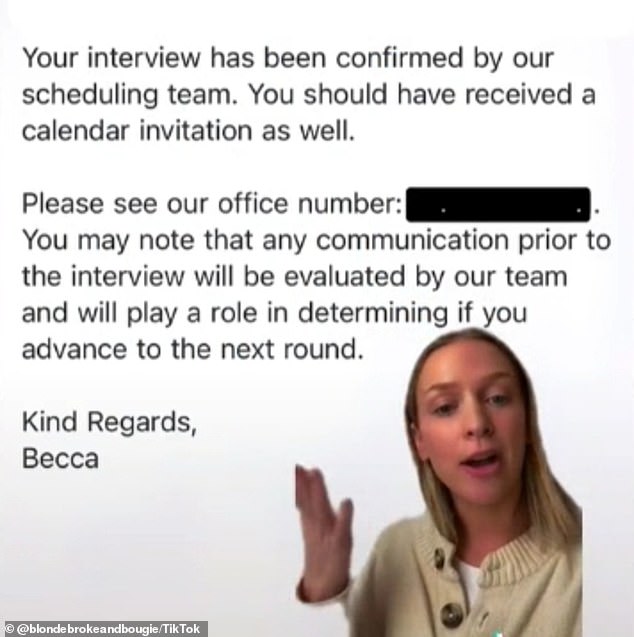 Becca gave Damien her cell number, but referred to it as her ‘office number,’ and encouraged him to keep up the bit via text 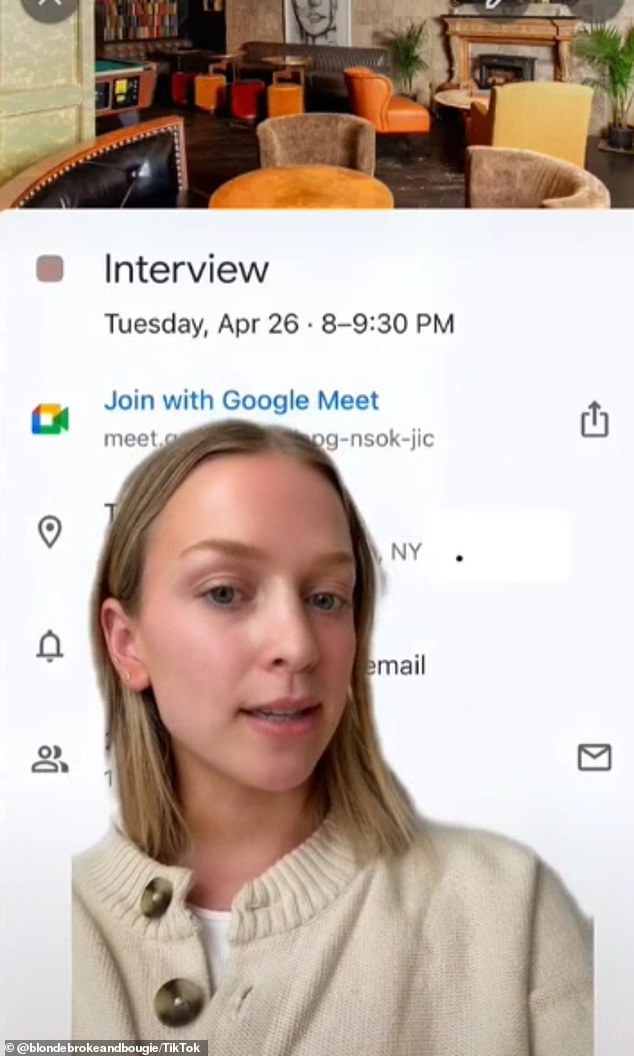 She also sent a Google Calendar invite to confirm the date

‘So at this point I’m like, oh, OK, we are comitting to the bit. So I sent a lengthy email back,’ Becca said.

Her email read: ‘Thanks for your interest in the position. It is a highly competitve market, however I am pleased to tell you we would like to invite you to a first round interview.

‘This interview will consist of selecting a time and place, and then we will be assessing your selection of choice, conversations skills, and overall appearance. Should you pass that interview round, we would discuss next steps.

‘Please provide your availability,’ she went on, offering suggestions of dates. ‘You may also choose to send a calendar invite if that works for you. Thanks, and good luck!’

Damien, too, continued the joke.

‘That’s great news!’ he wrote back. ‘Looking forward to the opportunity to demonstrate my fit for this role in the market.

‘I apprecaite your team is very busy, how would next Tuesday at 8pm work? According to my info, your office is loacted in [redacted],’ he went on, suggesting a venue and asking for her number. 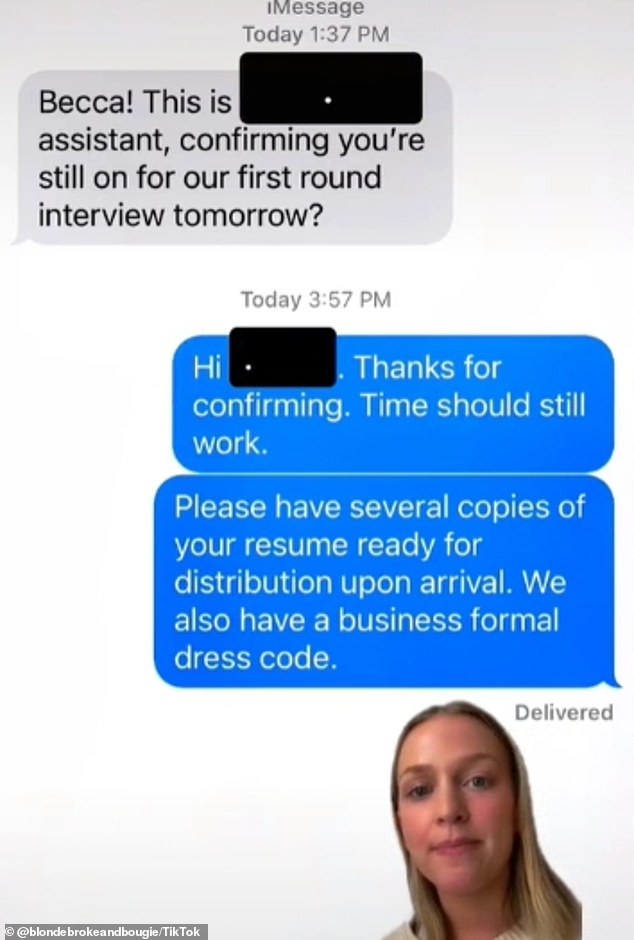 Damien even texted her, pretending to be his own assistant, to confirm the ‘interview’ the day before. Becca tells DailyMail.com there will be a ‘second round interview soon’

Becca sent him a calendar invite titled ‘Interview’ and wrote back: ‘Your interview has been confirmed by our scheduling team. You should have received a calendar invitation as well.’

In her TikTok video, she added that she was ‘too committed to the bit’ and wasn’t ready for it to end over text, so she encouraged him to keep pretending.

‘Please see our office number: [redacted],’ she wrote. ‘You may note that any communication prior to the interview will be evaluated by our team and will play a role in determining if you advance to the next round.’

Damien got the message. The day before their date, he sent her a text message, pretending to be his own assistant.

‘Becca! This is [name’s] assistant, confirming you’re still on for our first round interview tomorrow,’ he wrote.

Becca confirmed and asked him to have copies of his résumé ready for distribution. She also informed him of business formal dress code.

Viewers have gone wild for Becca’s video, and think she and the man are a match made in heaven

‘I was a little disappointed when he did not show up in a full suit,’ she admitted on TikTok, ‘but it can be forgiven, because this exchange was an A+.’

Viewers have gone wild for Becca’s video, and think she and the man are a match made in heaven.

‘This is SO CHARMING,’ wrote another. ‘I love when people commit to the bit.’

‘I would marry this man tomorrow I don’t even care what he looks like,’ wrote a third.

Speaking to DailyMail.com, Becca said that their date consisted of drinks at a local bar and they had ‘a lot of fun.’

‘He did ask if he was allowed to communicate with me normally after instead of in interview form, but I’ll still be scheduling a second round interview soon,’ she said.

She also asked him if it was OK for her to post their exchange on TikTok — and he said yes, as long as she agreed to have dinner with him next week.