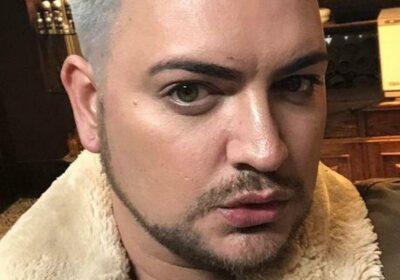 A man who was 'bullied for looking like comedian Alan Carr' spent a fortune modifying his appearance.

Liam Halewood, 36, started getting cosmetic work done eight years ago as he wanted to make it in the TV industry.

He splashed out £16,000 on his looks in a single year – including Botox, face fillers, non-surgical jaw alignment and hair transplants.

But instead of getting the "perfect" face he was striving for, the Blackpool-based bloke has regrets.

He believes the beauty industry should have tighter regulations to prevent people from making the same mistakes he has.

Liam told the Mirror : "I got one thing done and realised I could get more done and the nurse just did it because I said I wanted it.

"There was nothing about mental wellbeing. You sit in the chair, get it done and go. That's as easy as it is."

It didn't take long for the aspiring TV star to rely on the "quick fix" treatments.

He purchased them by using his credit card – and they became difficult to pay off as cosmetic work didn't actually win him any more jobs.

Liam said: "I thought 'how can I get this quick fix and how can I present myself to the world in a different way?'

"It was at a time when I didn’t think I was getting anywhere with my career and I thought it would catapult me into the limelight.

"I understand now there is no such thing as perfection.

"I actually feel that it doesn't matter how much work you've had done, you have obviously got a problem inside that needs sorting."

Now describing himself as "hairy, bald, with a 38-inch waist," Liam, who let his filler naturally dissolve, is happier than ever.

"I looked at myself in the mirror and thought, 'why am I bothering with all this crap?'" he says.

"It doesn’t matter how much you change on the outside… I actually just got a lot happier within myself."

The performer, who does a Boy George tribute, has backed a campaign pushed by House of Commons’ Health and Social Care Committee, which aims to reduce the "conveyor belt" approach to non-surgical cosmetic procedures

He also argues the law that prohibits anyone under the age of 18 from having cosmetic procedures should be increased.

Liam, who in the past had teenagers message him on Instagram asking for advice on procedures, added: "You need to be questioning people, especially teenagers today who want to look like a celebrity on Instagram – why are they actually getting it done?

"I think if you're changing your face fully, you need that cooling-off period, you need to know you're doing it for the right reasons.

"Young kids all look the same because they feel like they have to look like a Love Island star to get on in life.

"I know Botox can be used medically, but I do think there needs to be a bigger cap on age and a lot more care involved – they're putting needles into your face and changing your appearance.

Liam also urges influencers to be honest with their followers about when they're using filters.

He added: "They're doing a job – if they fake it with a filter, it’s false advertising.

"There needs to be more regulation on Instagram to stop selling the fake dream."