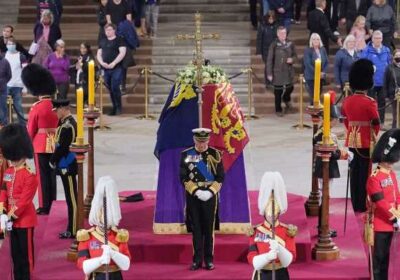 Metropolitan Police in London have reportedly arrested a man for attempting to rush at Queen Elizabeth II’s coffin as she lies in state at Westminster Hall.

“At [10 A.M.] on Friday 16 September officers from the Met’s Parliamentary and Diplomatic Protection Command detained a man in Westminster Hall following a disturbance,” a spokesperson for the police force confirmed in a statement on Friday, September 16, per The Telegraph. “He was arrested for an offence under the Public Order Act and is currently in custody.”

According to the Daily Mail, the man pushed several mourners out of the way in his attempt to run toward the queen’s casket. He reportedly tried to lift up the Royal Standard, which covers her coffin, and also reached out to touch it. Authorities reportedly tackled the man to the ground before arresting him. The BBC, which has been been livestreaming the queen’s lying in state 24 hours a day, also quickly cut away from the coffin when the incident took place, per the outlet. When the cameras focused on the coffin again, the sovereign flag appeared to have been moved.

The Royal Family: Get to Know the Next Generation

The queen died at at Balmoral Castle in Scotland on September 8 at the age of 96. Following a procession from Aberseenshire to Edinburgh, her body was transported to London on Tuesday, September 13, where King Charles III and several other members of the royal family received her at Buckingham Palace. The following day, they took part in another procession to Westminster Hall, where she has been lying in state for visitors to bid her a final farewell. She will remain there until her funeral on Monday, September 19.

Among the thousands of people who turned out to honor Queen Elizabeth on Friday was David Beckham, who waited 13 hours in a queue extending five miles before he was finally able to approach the coffin. The retired soccer star, 47, was seen wiping away tears as he waited inside the chapel and later expressed his condolences to the royal family.

“I was so lucky I was able to have a few moments in my life to be around Her Majesty,” he told ITV News. “[This is] a sad day but it’s a day to remember the incredible legacy she left. … It’s special to be here to celebrate, and to hear the different stories that people have to say.” The former Manchester United player — who was appointed an OBE (Order of the British Empire) in 2003 — added that his family always had a great deal of affection for the late monarch. “I grew up in a household of royalists and I was brought up that way,” he said. “I know that [my grandparents] would have wanted to be here, so I’m here on their behalf and on behalf of my family.”