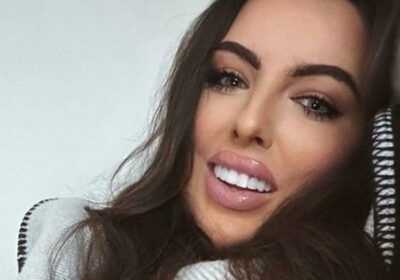 It's beginning to look a lot like Christmas – especially in the Bish family – as Luca's sister Claudia has given a peek into the decked out living room in her Brighton home.

Claudia is Luca’s only sister and according to her TikTok she describes herself as a “CEO” – where she has racked up 162,000 followers.

She often posts videos to the account of her life, including two where she explained to her followers what her day as a “female CEO” consists of.

While the stunner hasn’t detailed exactly what her position is, it's thought she works in the talent or influencer management industry.

Claudia has also used her TikTok to show off her Brighton home that she's spent the last few months renovating, with the last few posts showing off her show-stopping Christmas decorations.

In a video where she decluttered her living room table, a wreath can be seen over her fireplace, and red and white decorations.

Also sharing an overview of her living room on her Instagram, she captioned the post: "It’s the most wonderful time of the year."

Claudia has previously shared photos of the process of decorating her new home, which she started renovating in April 2021.

Showing off rooms as they finish, fans have spotted several designer items throughout the house, including Hermès blankets and throw pillows.

This luxury home is something that both Claudia and Luca seem used to, as it's a similar style in their family mansion, that includes a golden dining room and a huge kitchen.

Luca and Claudia, from Brighton in East Sussex, have an incredibly close bond. When he first entered the show, fans were left puzzled by his 1995 tattoo on his stomach, as it does not equate to his age of 23.

However, it has since been revealed as the year his sister was born.

Claudia was also the one in charge of Luca's social media accounts while he was in the Love Island villa this summer.

It was earlier this week that Luca and Gemma Owen announced their breakup after just three months of being official.

Gemma took to Instagram to announce their breakup, which was soon followed by a similar statement from Luca.

The pair were together for the majority of their time in the Love Island villa and ended up coming in second place.