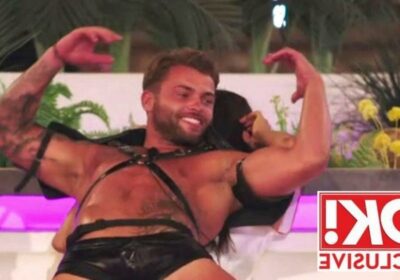 Jake Cornish and Liberty Poole left the Love Island villa earlier this week after a shock change in heart led to the Brummie beauty dumping her boyfriend on national TV.

The 21 year old claimed that water engineer Jake, 25, "didn't love" her like she loved him, and after some very civil discussions the pair agreed it was best they walk away as friends.

As Weston-Super-Mare lad Jake returns to the UK, the original Islander won't be short of job opportunities, with brands lining up to collaborate with the show's best-known contestants. As the star has racked up an impressive 264K followers on Instagram his freshly blue-ticked social media profile makes him hot property in the influencing world.

However, Jake has already revealed his post-villa dream is to join male stripping troupe, the Dreamboys. During the season's annual heart-rate challenge – where the lads and ladies have to do their best sexy dances to get their partners hot and bothered – Jake went all-out, going full-blown male stripper with his viking-inspired routine.

After throwing Liberty up around his waist and showing off his grinding skills with plenty of sex-inspired dancemoves on his partner, Jake stated in the Beach Hut that he was "made for this".

"If anyone from Dreamboys is watching, get on the phone to me now!" exclaimed the tattooed hunk. Despite rumours circling that Jake would be offered a job by the company – which tours the country putting on raunchy shows they didn't speak out about the Love Islander's hopes to join at the time.

OK! spoke exclusively to Dreamboys owner and director Alice Woods who told us she and the boys can't wait to work with Jake upon his return to Blighty. "I've loved watching Jake on Love Island, from the first few episodes he instantly caught my eye as a potential Dreamboy, he's got the look!" Alice said.

"He has the perfect cheeky chappy demeanour we look for in all our performers, and a few Islanders who left the series earlier on had mentioned to us that his dream in life was to perform with the Dreamboys.

"We're all about making people's dreams come true, so how could we say no?!"

Alice is in-talks with those close to the star as he is set to train and perform with the company's touring cast in a string of guest shows. She continued: "When we saw him doing his strip-tease during the challenge, we couldn't believe it, especially as he literally asked us to get in touch… So we did!

"Our only initial concern was the fact he was in a fresh relationship with Liberty, as being a Dreamboy can sometimes cause issues if the boys have new girlfriends who don't yet trust them 100 per cent.

"As you can imagine, the boys have thousands of women lusting after them, which can prove tough on their partners, but him leaving the show as a single man has cemented his position." Sources close to the star have confirmed the newly-single star will be in his element as he performs to crowds of screaming women and islander pal Sharon Gaffka initially put Jake in-touch with the Dreamboys team.

OK! has approached Jake Cornish for comment, but the islander is yet to have access to social media.