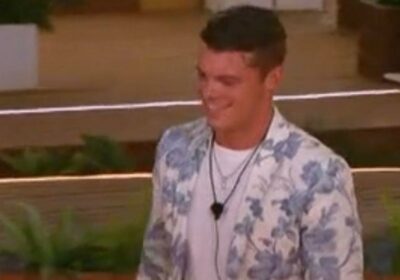 Love Island hasn't been short of drama recently, but it's actually Billy Brown's outfits that have got viewers talking the most.

The 23 year old, who is currently coupled up with Danica Taylor, has sported some vibrant outfits on the ITV2 dating show, including a statement suit and a bunch of colour coordinated ensembles.

Billy, who was one of the six single boys who headed into Casa Amor, wore a show-stopping blue and white floral suit to the Love Island 'Mad Movies' night, and despite the episode being packed with drama it was his outfit that caught fans' attention.

Many took to Twitter to give their opinion on the bold two piece, which was compared to everything from a vase to wallpaper to a Whetherspoons plate.

"The more I look at billy the more his outfit is starting to look like wallpaper," one viewer tweeted, as another added: "Questionable outfit choice from Billy tonight".

The floral suit featured a similar pattern to that of a plate from pub group Wetherspoons, and many viewers were quick to point out the resemblance.

One Love Island fan said: "Billy's outfit looks like a spoons plate," while a second joked: "billy's outfit is sponsored by wetherspoons xx".

However, it's not just his recent look which has caught viewers' attention, as his colour coordinated look at the Casa Amor recoupling also prompted a reaction from fans online.

Billy wore a pair of baggy turquoise trousers which he paired with a white t-shirt featuring a large turquoise logo, and finished off his look with white trainers.

Viewers couldn't help but notice how perfectly his t-shirt and trousers matched, with one person saying: "I like Billy's outfit coordination".

He's debuted similar colour coordinated looks during his time on the show, including a pair of statement bright red trainers along with a matching t-shirt, and more recently, a pair of orange and white trainers paired with white trousers and an orange shirt.

Billy's sister, who is currently in charge of his social media accounts, recently took part in a Q&A with fans on Instagram and revealed that she was "surprised" by some of his vibrant outfits, most notably the floral suit.

A fan asked: "Are you surprised by anything Billy's done so far?" and she responded: "Surprised by some of the outfit choices," along with a laughing face emoji.

"FYI the past few days he's not been wearing his own clothes, the suit topped it off for us," Billy's sister added.