Not backing down. Abhishek “Shake” Chatterjee doesn’t regret anything he’s said about Nick Lachey and wife Vanessa Lachey since meeting them on Love Is Blind.

The 35-year-old reality star exclusively told Us Weekly on Thursday, April 7, how he really feels about the 48-year-old singer, calling him a “little b—tch” after previously feuding with him on the season 2 reunion for the Netflix series.

Getting Messy! Relive the Biggest Drama on ‘Love Is Blind’ Through the Years

Shake made headlines in March after he was put on blast by the married couple, who cohost Love Is Blind, during the reunion. Nick and Vanessa, 41, called Shake out for not trusting the process and putting too much weight on physical appearance during his brief romance with costar Deepti Vempati.

The “Life Is Blurry” podcast host, who launches his podcast later this month, then proceeded to tell his castmates during the special that the only person present he was actually attracted to was the NCIS: Hawaii star, which rubbed many people the wrong way.

“Hey, tell me how attracted you are to [my girlfriend] Emily [Wilson]. Tell me she’s beautiful. She’s gorgeous. She’s hot, but she’s mine,” Shake told Us on Thursday, referring his new relationship. “You can look, but you can’t touch, pal.” 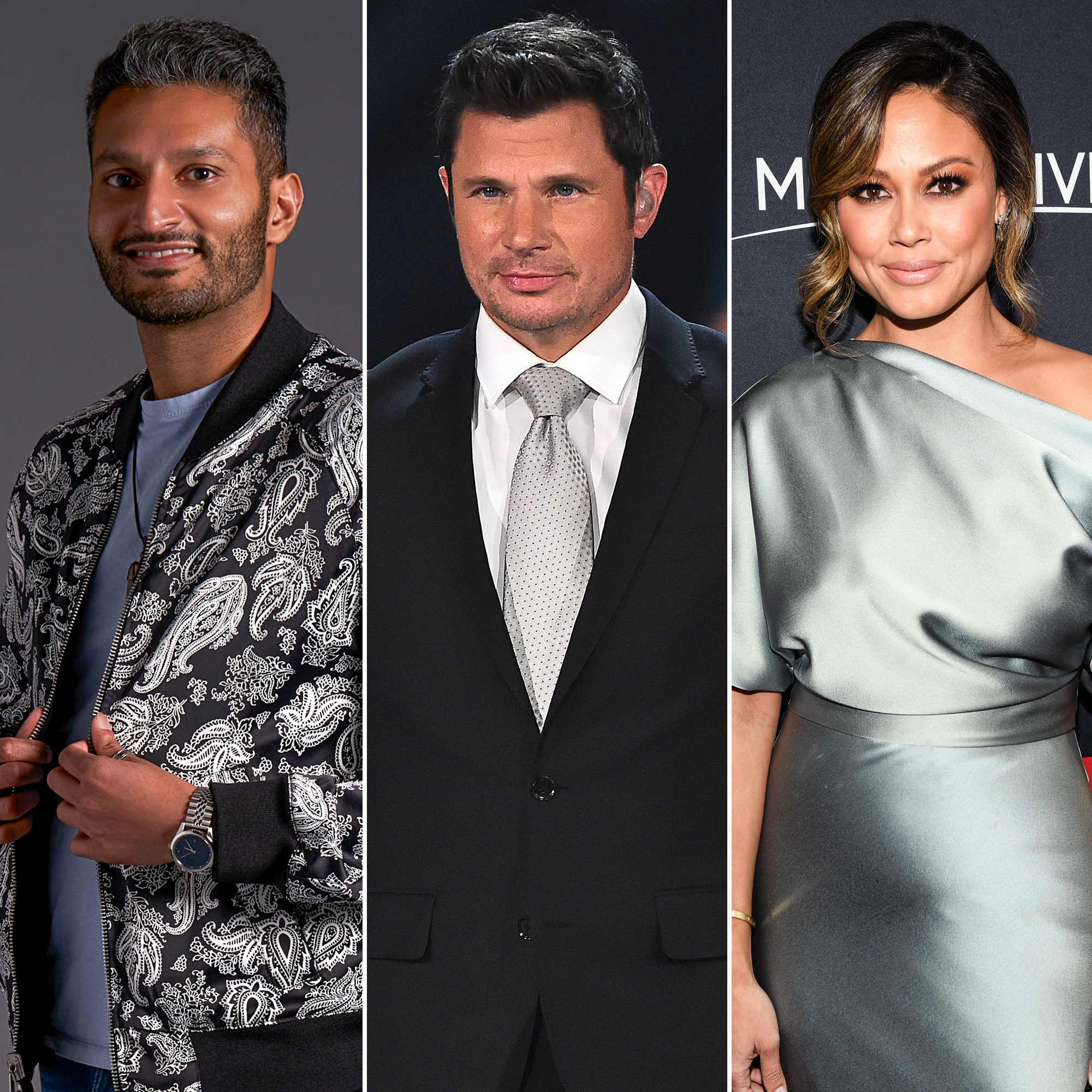 Following the reunion, Shake again raised eyebrows when he posted a clip from Nick’s time on MTV’s Newlyweds. In the video, the musician refused to open his then-wife, Jessica Simpson’s door.

“@NickLachey not even opening the car door for his wife. Sad,” the DJ captioned the since-deleted Instagram video in March.

When asked about whether he regrets coming after Nick and his alleged mistreatment of the 41-year-old designer, Shake doubled down on his negative remarks about the former boy bander. (Nick was married to Simpson from October 2022 to December 2005.)

“Honestly, he treated Jessica Simpson like garbage for years. And guess what? That’s documented big boy,” Shake told Us on Thursday. “All right, 98 degrees. Are you kidding me? More like 32 degrees. You haven’t been 98 degrees since 1998 pal.”

The Netflix personality claimed that Nick’s boy band “never took off” so he “got jealous” of Simpson. “[She was] stunning, talented, beautiful, ambitious, everything that made you a little sad,” Shake said of The Ultimatum cohost. “[And] you decided to take it out on her by being a jerk.”

Shake then argued that Nick met Vanessa on the set of one of his music videos, which also goes against the show’s premise. The couple tied the knot in 2011 and have since welcomed three kids: sons Camden, 9, and Phoenix, 5, and daughter Brooklyn, 7.

“Is love blind or did you meet on the set of a music video? Like, OK. Then you come on here and tell me how I treat people [poorly] and talk to people,” he added. “You single me out when you’re supposed to be an impartial host, like, bro, you’re a washed up nobody.”

‘Love Is Blind’ Couples: Who Is Still Together and Who Broke Up?

While Shake’s drama with the Lachey family doesn’t seem to be in the past, the TV personality has switched his focus to launching his new “Life Is Blurry” podcast.

He teased his newest venture, telling Us that the title is in reference to the quote he said about Love Is Blind, noting that love is blurry and not completely blind like the show’s premise promotes.

“There’s a lot of things that are confusing, unclear, foggy, blurry. The change the closer you look at them, the more you look at them, the more you learn and your opinions change,” Shake explained to Us. “To me, this is an opportunity to really talk about not only love, but finances, modern dating healthcare, cryptocurrency, cancel culture, sex work, you name it. Because these are all blurry topics. And, interestingly, the more you know about it, it gets less blurry.”

Shake’s “Life Is Blurry” podcast, which is being produced with Citizens of Sound, premieres on Tuesday, April 12. Check it out on Apple Podcasts or YouTube.