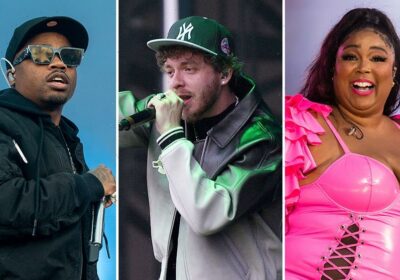 Lizzo, Jack Harlow and Roddy Ricch are among this year’s first round of performers taking the stage at the BET Awards, airing live from the Microsoft Theater in Los Angeles on June 26 at 8 p.m.

Taraji P. Henson’s is set for her second time hosting the show. The ceremony will also feature performances by up-and-coming artists GoGo Morrow and OGI on the BET Amplified Stage.

Music mogul Sean “Diddy” Combs will be honored with the BETs’ lifetime achievement award, designed to recognize “those who have not only shaped culture but those who have been leaders in elevating the industry in an impactful way.”

In nominations that were announced earlier this month, Doja Cat will head into the night as its dominating music nominee with an album of the year nomination for “Planet Her,” plus nods for best female R&B/pop artist and female hip-hop artist. Her duet with SZA, “Kiss Me More,” is up for video of the year and best collaboration. Doja Cat is also nominated for the BET Her award, given to a song that motivates and empowers women, for her hit record, “Woman.”

Ari Lennox follows with four nods including best female R&B pop artist, a BET Her nomination for “Unloyal” with Summer Walker, and nods for video of the year and the BET Her award for her song “Pressure.” Drake is also up for four awards: best male hip-hop artist; best collaboration and video of the year for “Way 2 Sexy,” featuring Future and Young Thug; and album of the year for “Certified Lover Boy.”

Connie Orlando, executive VP of specials, music programming and music strategy, is overseeing the production of the show, alongside Jesse Collins, CEO of Jesse Collins Entertainment.