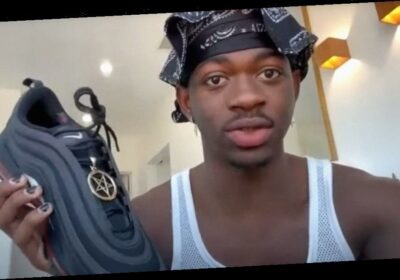 Following backlash from his controversial music video “Montero (Call Me By Your Name),” Lil Nas X has collaborated with MSCHF to release Satan Shoes that many aren’t happy about.

The redesigned Nike Air Max 97s features the numbers 666, a pentagram and “contains 60cc ink and 1 drop of human blood,” according to a website for the shoes. The shoes retail for $1,018.

The black and red footwear also includes a reference to the Bible verse “Luke 10:18,” which translates to, “I saw Satan fall like lightning from heaven.”

Nike denies any involvement with the sneaker.

“We do not have a relationship with Lil Nas X or MSCHF,” the company shared with “GMA” in a statement. “Nike did not design or release these shoes and we do not endorse them.”

Spring into a new season with these bestselling running shoes

Fashion and beauty industry leaders speak out against anti-Asian racism

Lil Nas X’s Satan Shoes also caught the attention of South Dakota Gov. Kristi Noem, who said on Sunday that the shoes are proof “we are in a fight for the soul of our nation.”

In response, Lil Nas X remarked, “Ur a whole governor and u on here tweeting about some damn shoes. Do ur job!”

Lil Nas X said he was well aware of the potential uproar his new music video for “Montero (Call Me By Your Name)” would cause and he has one message to his haters: “Stay mad.”

The music video caused anger for its depiction of scenes from the Bible as well as Lil Nas X giving Satan a lap dance.

When one critic claimed Lil Nas X was pushing an agenda onto children, Lil Nas clapped back, “I am not gonna spend my entire career trying to cater to your children. That is your job.”

“I spent my entire teenage years hating myself because of the [stuff] y’all preached would happen to me because I was gay,” the Grammy winner said in another tweet on Saturday. “So I hope u are mad, stay mad, feel the same anger you teach us to have towards ourselves.”

The “Old Town Road” singer further trolled haters by releasing a fake apology video about the shoes, which starts off with him pretending to cry before jump-cutting to the now-infamous end of the “Call Me By Your Name” music video.