‘Like putting ice cream on caviar’: meet Joff Bush, the composer behind Bluey 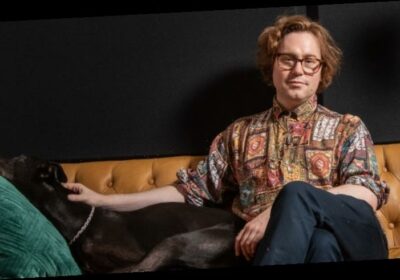 As the music composer behind the popular kids’ phenomenon Bluey, Joff Bush might be the most successful local musician you’ve never heard of.

Last week the 35-year-old claimed a record that even global successes The Wiggles haven’t managed, when Bluey: The Album – a musical tie-in to the hit ABC cartoon – became the first children’s album to ever top the main ARIA albums chart.

“I’m sure people say, ‘Come on, it’s Bluey, of course it’d go to number one,’ but we didn’t expect it, especially off the back of the Hottest 100 with all those great artists charting again,” Bush says. “We’d actually booked in to move house last weekend, that’s how little we were expecting around it.” 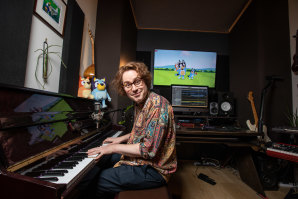 Joff Bush, composer for Bluey, in his studio in Brisbane.Credit:Paul Harris

Originally a piano student at the Queensland Conservatorium, Bush was swayed towards composition after his piano mentor noted he was spending most of his time “writing and hanging out with film students”.

“One of those film students was Daley Pearson, who became an executive producer on Bluey,” he explains of his start on the show. “We were all 18 and 19, making dorky films together. But I got obsessed with storytelling and got really nerdy with it and studied film scoring as a postgraduate.”

Despite the franchise’s midas touch, Bush’s surprise at the album’s success is understandable. Perhaps even more impressive than its number one debut is the fact the album, unlike the usual high-energy pop of the kids’ genre, is largely instrumental music, with unexpected forays into polka, exotica and classical music. 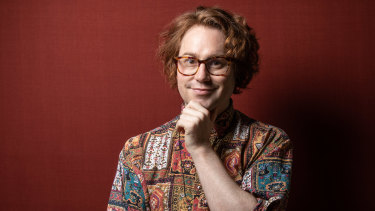 Last week the 35-year-old claimed a record that even global successes The Wiggles haven’t managed.Credit:Paul Harris

Of course, it’s all churned through the show’s mischievous, anything goes spirit – if the chiptuned Pachelbel’s Canon, or reliance on kazoos, didn’t give that away.

“A lot of the show is about imaginative play, and so there is something really playful about taking these well-known hits from the classical canon and just butchering them, really,” laughs Bush. “It’s so much fun. It’s like putting ice cream on caviar, or something.”

The album’s spirit evokes a wider philosophy that guides his work on the show, says Bush, one of treating its audience – however young or old – with a respect that’s not always afforded to children’s television.

Bush with his dog Winnie.Credit:Paul Harris

“We always just wanted to get inside the heads of the characters, more than any external thing of telling kids watching the show how they should feel,” says Bush.

“We also always talk about, and I don’t know how to put this nicely without sledging other kids’ shows,” he laughs, “just not making it too brash or even too kiddy. You know those shows where every moment is like, ‘ISN’T THIS EXCITING!?’; it can almost feel like a carpet ad. The music here had to appeal to the whole family, really. It can’t be too obnoxious for the poor parents.”

Besides Bluey, Bush has also done music for TV shows including SBS’s The Family Law and ABC’s Are You Tougher Than Your Ancestors?. He fears he’s potentially been “typecast into Bluey at the moment”, not that he’s been able to venture into other projects anyway. The animated series, whose third season he begins working on shortly, is “all-consuming”, he says, involving a 52-episode order with one delivered per week.

“It takes every second of that week,” says Bush. “I work with such a great team and very good musicians, and I couldn’t do it without them. But I haven’t had time to do anything else, really. Bluey has been my life for the past three years, which is great. It’s a good world to be part of.”

The insulated studio life of his profession also means he’s largely unaware of his impact on Australian families daily, or the fact he’s crafted a kids’ TV theme song already as iconic as his own favourites from ’90s cartoons such as Rugrats, DuckTales and Chip ’n Dale: Rescue Rangers.

“I mean, it’s cool but I haven’t really had time to sit back and think about it. I’m in such a bubble with the production, and particularly with COVID, it’s not like people are playing it at dance halls,” he laughs. “It’s in people’s homes, so it feels a bit removed.”

A recent stint working on the Bluey’s Big Play stage show, however, offered some perspective.

“Seeing [the stage show] live, it was such an emotional experience for me because I’d never seen the reaction of kids to the music firsthand in that way. It became really tactile,” says Bush. “I was like ‘Wow OK, everyone’s really into this!’ I just hope everyone doesn’t get sick of it.”