She’d also accused the children’s father of “cheating with his spirit wife”.

A mother charged with killing her daughters told their father their organs would be “worth a lot of money,” Las Vegas police have claimed.

Amanda Sharp-Jefferson, 26, was arrested on Friday after her boyfriend Jaykwon Singleton said he came home to find their daughters, 1-year-old Rose and her 2-month-old sister Lily, stacked on top of each other in a baby swing — both dead.

According to an arrest report seen by the Las Vegas Review-Journal, Singleton said the two had been dating since 2018 and hadn’t had any problems in their relationship, until two weeks ago, when she “started talking about the altar spirit world making allegations that he was cheating with his spirit wife.”

He said his partner seemed “fine” when he left their apartment on Thursday evening to visit his grandmother; when he came home at noon the following day, he found the girls unresponsive.

According to the report, Sharp-Jefferson “kept shushing him and at one point, made a statement that their organs were worth a lot of money.”

She claimed that when she woke up on Friday morning, she found two dead children in her apartment, and that somebody had planted their stroller and toys, the report claims.

“Amanda described the children to be of a darker skin and one of the kids to have foam coming out of its mouth,” the report said. 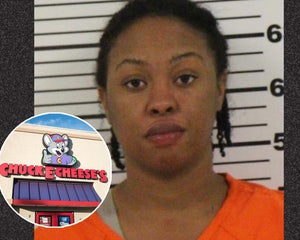 She said that instead of calling for help when she found the bodies, she decided to take a shower because she “likes showers”.

When asked about the organs comments, she said she “saw a movie where people made money on body parts after a person died,” the report said.

Police have not revealed how the children died, although according to homicide Lt. Ray Spence, they have a “very good idea what the cause of injury is” to the older sister. Singleton told detectives he believes they were drowned.

Spence added it was too early to determine if the mother suffered from mental illness, but he “would definitely not rule that out at this point.”

Sharp-Jefferson — who only has one previous misdemeanor destruction of property charge, which was dismissed — is being held without bail.