Lady Sarah Chatto is back at Royal Ascot for Ladies Day 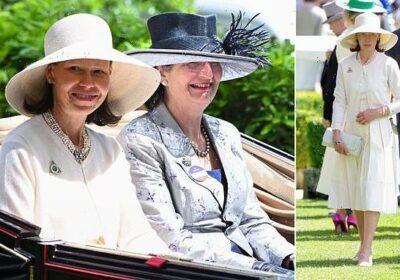 All white, Chatto! The Queen’s beloved niece Lady Sarah looks immaculate as she returns to Royal Ascot for Ladies Day

Lady Sarah Chatto was spotted among the elegant guests who made their way to Royal Ascot this afternoon.

The Queen’s niece, 58, arrived early afternoon with her husband of 28 years Daniel to make the most of Ladies Day at the racing event in Berkshire.

Stylish Sarah, the daughter of Princee Margaret, donned a white dress with a pleated skirt, a matching cardigan and a white sunhat for the occasion.

It is the second time this week that Sarah was spotted along the Ascot race course. Yesterday she was seen chatting with her cousin the Prince of Wales, 73, who placed a gallant kiss on her hand.

Despite her closeness to Her Majesty, 96, Lady Sarah is known for keeping a low profile, and while she’s attended Ascot in the past, she’s not regularly seen with the royal family, aside from a handful of key events. 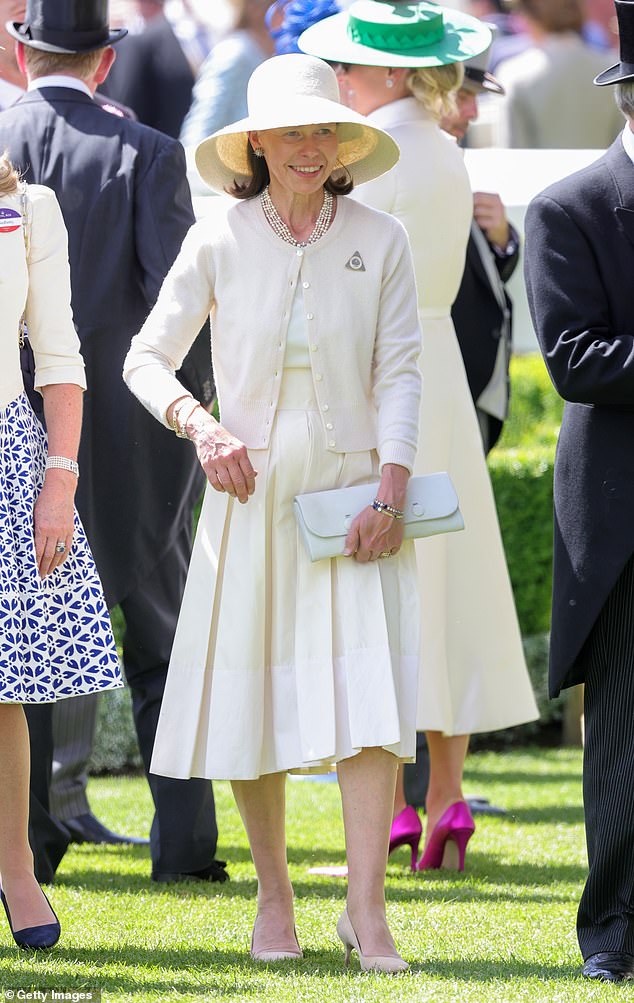 Lady Sarah Chatto, the Queen’s niece, 58, arrived early afternoon with her husband of 28 years Daniel to make the most of Ladies Day at the racing event in Berkshire 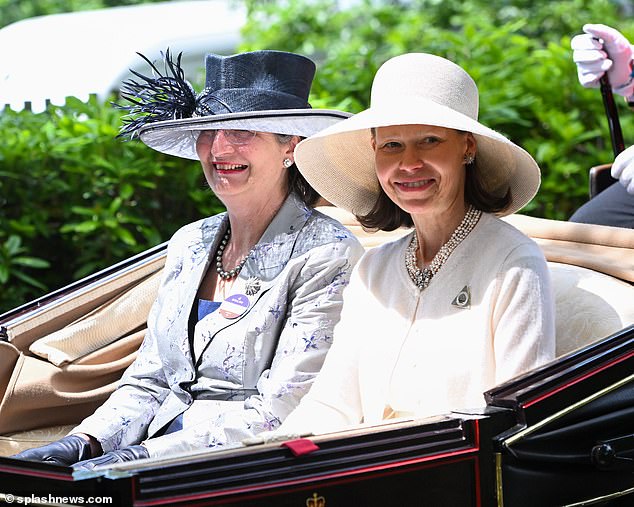 Practical Lady Sarah, right, wore the same hat for both her Ascot appearances this year. She added a note of chic with a necklace counting four strings of pearls

Princess Margaret’s daughter was the picture of elegance this afternoon as she was spotted on the Ascot lawn.

She stood out in her crisp white look, pairing the immaculate dress with a necklace made of four strings of pearls and star-shaped diamond earrings.

She donned cream coloured heels, which matched the wide-brimmed hat. 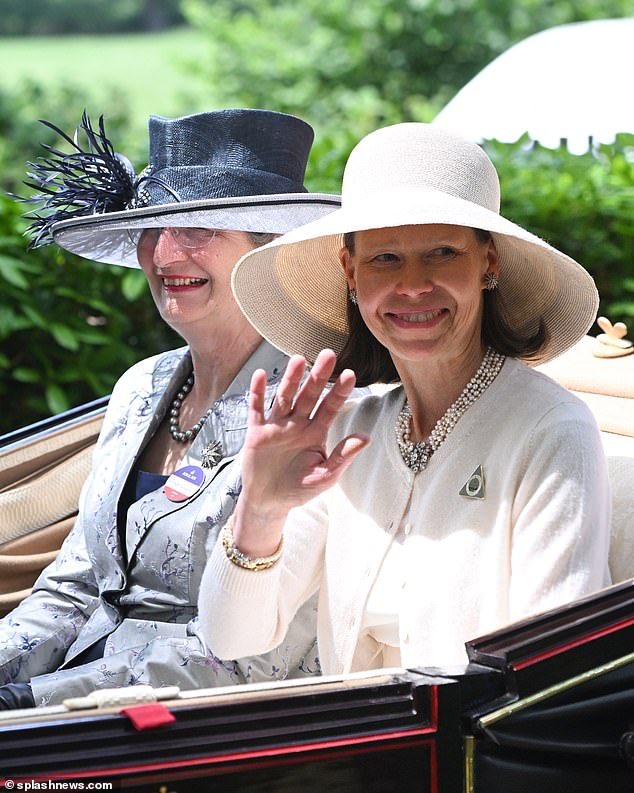 Sarah arrived in a carriage with the Viscountess Brookeborough, left, ahead of this afternoon’s festivities.

Practical Lady Sarah wore the same hat for both her appearances at the races.

The fresh-faced mother-of-two did not sport makeup for her outing and showcased her natural glow.

She arrived in a carriage with her husband Daniel Chatto and the Viscountess Brookeborough, and waved to fans on her way to the event.

Today she appeared in her element in the royal enclosure, holding a discreet white leather clutch.

She was seen chatting to Zara Tindall, 41, the daughter of her cousin the Princess Royal, who was also in attendance. 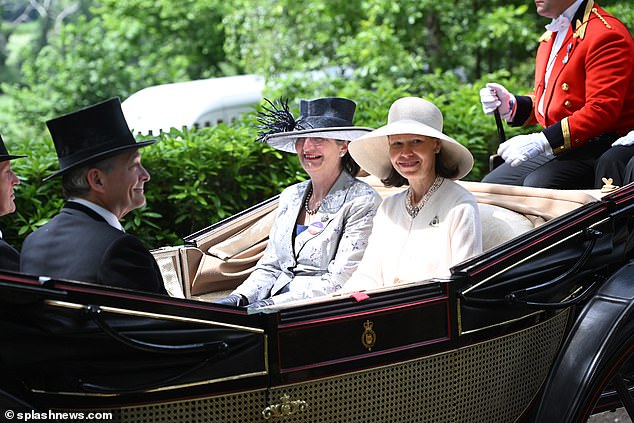 Lady Sarah was accompanied by her husband of 28-years Daniel Chatto, which whom she shares two sons

Yesterday, Lady Sarah looked pretty in pink for her outing at the races.

She was accompanied by her hunky son Samuel, 25, who is forging a career as a sculptor and was also seen chatting to her cousin, Prince Charles, who appeared to be greet her with a kiss on the hand.

It comes after Princess Margaret’s daughter attended the service of thanksgiving at St Paul’s cathedral during the Queen’s Platinum Jubilee celebrations.

Lady Sarah Chatto was born in 1964 — the last royal baby born at a palace rather than a hospital — within weeks of cousins Prince Edward, Lady Helen Windsor and James Ogilvy.

The Queen has been described as a ‘surrogate mother’ to Sarah and her brother, and is particularly close to Lady Sarah, who is understood to remind Her Majesty of her late sister. 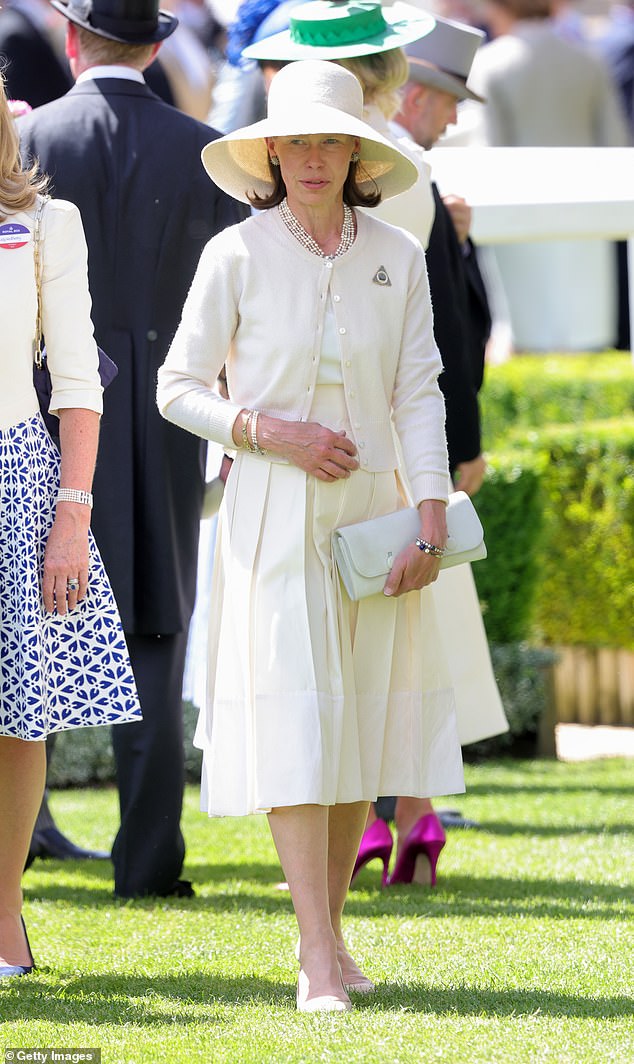 Sarah, the Queen’s beloved niece, was the picture of elegance in the royal enclosure of the equestrian event

One royal insider previously revealed: ‘The Queen adores Sarah and seeks out her company as often as possible. She is her absolute favourite younger Royal.

‘They are hugely at ease in each other’s company. Much giggling can be heard when they are together. They share a sense of loyalty, fun, duty and the ridiculous.’

One acquaintance said: ‘Sarah is very unassuming; shy and almost embarrassed with no grandeur at all. Take royal events — she’ll be on the balcony, but she never pushes herself to the middle or the front, like some.’

The royal family have turned out in force at Ascot this year, in the wake of the Queen’s absence due to mobility issues.

The Queen has been at every Royal Meeting since acceding to the throne in 1952, apart from when it was held behind closed doors in 2020.

Instead, the Prince of Wales, 73, and Duchess of Cornwall, 74, were in attendance alongside a host of other royals – including Princess Anne, 71, The Earl and Countess of Wessex, and Princess Beatrice, 33, who was joined by her husband Edoardo Mapelli-Mozzi, 38.

Just over a week after the Platinum Jubilee celebrations ended, members of the royal family appeared in high spirits, with many taking part in the carriage procession, before greeting one-another in the warm summer sunshine at the racecourse.