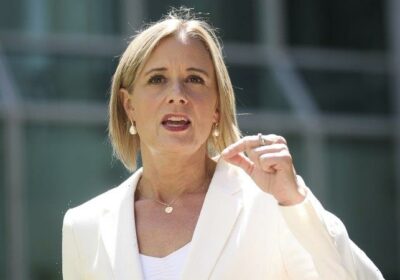 Labor’s home affairs spokeswoman Kristina Keneally met with the head of one of China’s peak propaganda groups in Australia who has donated thousands of dollars to the Labor Party.

Senator Keneally on Wednesday confirmed she did not know the individual’s links to a United Front-backed group before meeting him but did not regret the encounter.

In post on Twitter, Senator Keneally said it was great to meet members of the Australian Chinese Teochew Association in Cabramatta last week, adding that “Fowler deserves a Govt that is #onyourside”.

One of the individuals Senator Keneally met was Hung Ly, who is also president of the Australian Council for the Promotion of the Peaceful Reunification of China (ACPPRC), which has previously been described as the peak United Front group in Australia.

The United Front Work Department is the Chinese Communist Party’s organisational effort to use the diaspora of citizens abroad to turn opinion and policy in Beijing’s favour. Mr Ly has donated several thousand dollars to Labor candidates.

Asked whether she knew of Mr Ly’s association with the ACPPRC, Senator Keneally said: “I did not know that… I must say he is the head of the Teochew Association in Fowler, I am going to talk to the local community in Fowler.”

“And as the Labor candidate for Fowler, I am not going to shy away from engaging with community groups that represent people, Australians, from multicultural backgrounds.

“I have had no information coming from national security agencies subsequent to my meeting that there was any risk at all.”

Senator Keneally said she was invited by a local councillor in the federal electorate of Fowler which she is contesting at the next election.

“I can guess from the insinuation you’re making that you are concerned about some aspect of foreign interference. So am I,” she said.

“But what we should not do is look upon those Australian citizens who have migrated to this country – whether it’s from China, Cambodia or anywhere else – and assume they all agents of foreign interference. They are Australians.”

When former prime minister Tony Abbott was criticised for attending a fundraiser with Mr Ly and other individuals linked to United Front, he said he would not have gone if he knew of their links to the CCCP’s propaganda arm.

Property developer and million-dollar political donor Huang Xiangmo, who had his Australian visa cancelled in 2019 on advice from counter-espionage agency ASIO, is a former chairman of the ACPPRC.

“[Former Labor senator] Sam Dastyari’s political career and reputation were destroyed by his association with Huang and the ACPPRC. And Huang has been banned from Australia on ASIO advice,” Professor Hamilton said.

“The ACPPRC has been overtaken by the Australia China Economics, Trade & Culture Association as the foremost united front body in Australia, but it remains very influential with a dense network of ties to the Chinese Communist Party agencies.

“After the Dastyari affair, most politicians recognised that the ACPPRC is radioactive. Apparently, Kristina Keneally did not get the memo. Or she doesn’t see palling around with CCP proxies as a problem. You can bet ASIO has taken notice.”

Liberal senator Hollie Hughes said it raised questions about whether Senator Keneally should take on the home affairs portfolio.

“As someone who has designs on the Home Affairs Ministry and who is likely to have been briefed on the dangers of meeting with certain groups with links to the CCP – is the candidate for Fowler so desperate to prove her so-called migration credentials she’s prepared to jeopardise our nation’s security? ” Senator Hughes said.

“The Australian people can see Kristina Keneally shouldn’t be allowed anywhere near the Home Affairs portfolio, nor to represent the people of Fowler for that matter.”