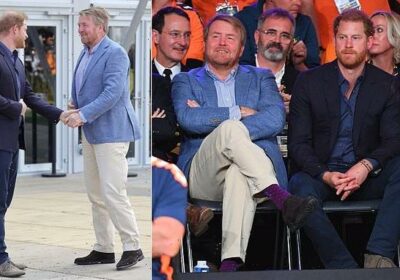 A royally warm welcome! Jovial King Willem-Alexander of the Netherlands beams as he shakes hands with Harry ahead of the Invictus Games wheelchair basketball final

Prince Harry appeared in good spirits as he joined King Willem-Alexander of the Netherlands to take in the action at the Invictus Games today.

The Duke of Sussex, 37, who is flying solo after his wife Meghan returned to California, sat next to the Dutch monarch to watch the final of the wheelchair basketball competition in The Hague.

King Willem-Alexander, 54, who recently flew to the UK for the Duke of Edinburgh’s memorial service, was on typically good form and shared a joke with Harry as they watched the match. 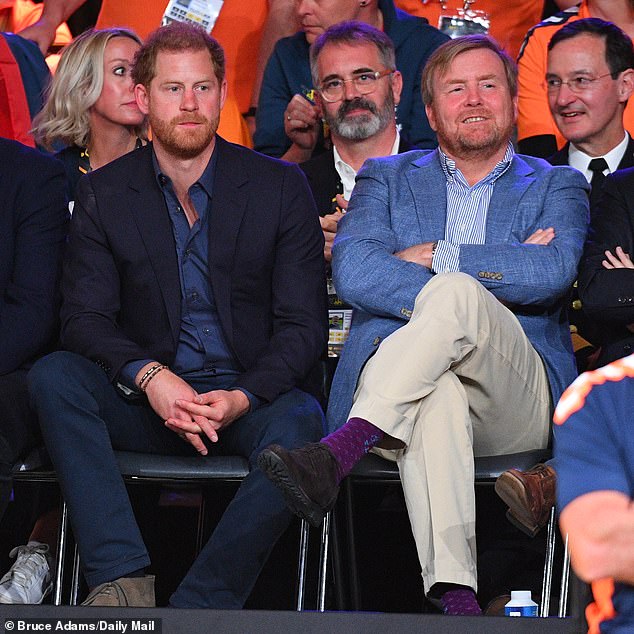 A royally good time! Prince Harry appeared in good spirits as he joined King Willem-Alexander of the Netherlands to take in the action at the Invictus Games today 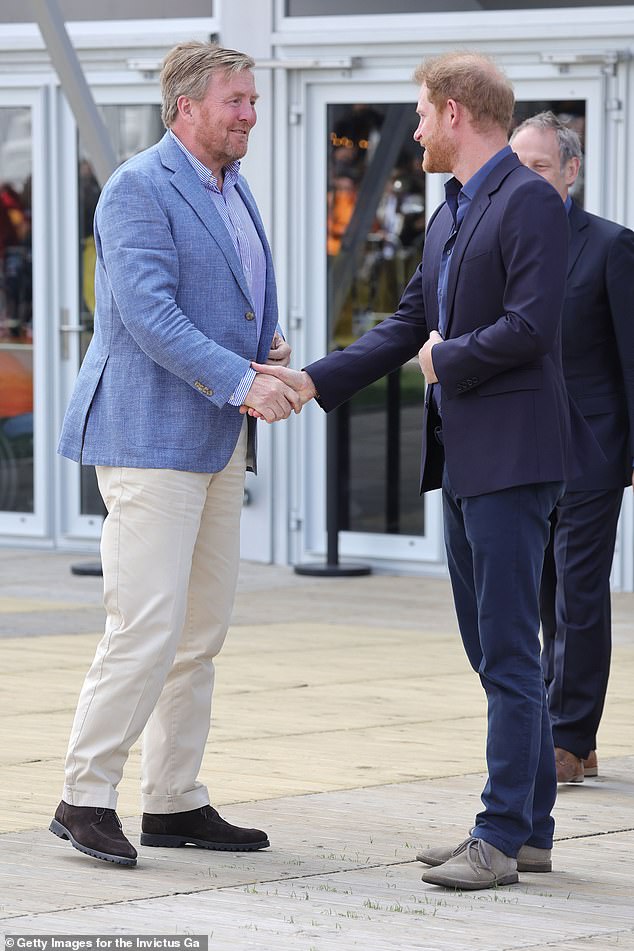 A warm welcome: King Willem-Alexander of the Netherlands shakes hands with Prince Harry prior to the wheelchair basketball finals at the Invictus Games

Earlier he joined his wife Queen Maxima to open the King’s Games, an annual sporting competition that is held ahead of King’s Day, a national holiday.

Harry started the week with Meghan by his side but has spent the last few days alone in the Netherlands.

He has made headlines with a number of high-profile interviews, including one in which he took a swipe at the people in the Queen’s inner circle.

In yet another controversial interview with a US broadcaster, the Duke of Sussex claimed on Wednesday one reason he flew to the UK last week to see his grandmother – for a supposedly private meeting – was because he wanted to make sure ‘she’s protected and got the right people around her’.

His controversial comment caused not just derision that it came from a man who has spent much of the last two-and-a-half years abroad and has caused his grandmother so much heartache, but also speculation as to who he could be referring to. 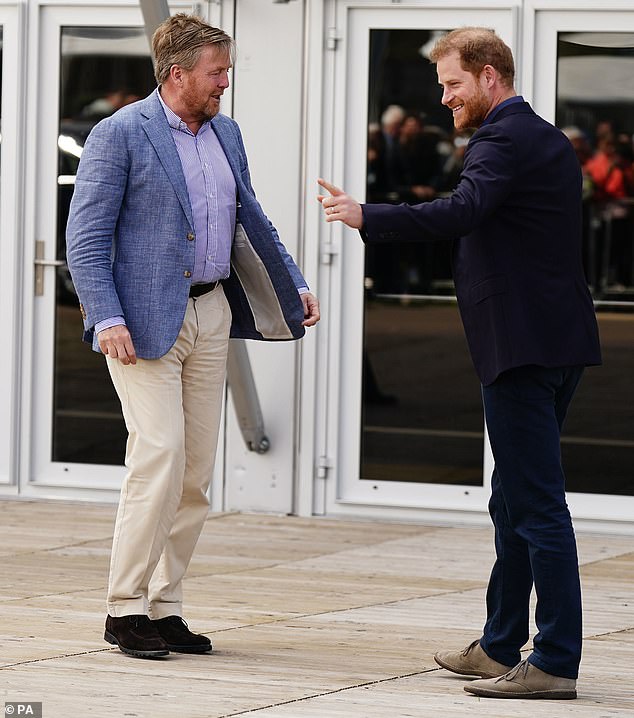 Joking around: The pair shared a light-hearted moment as they exchanged their greetings at the Invictus Games 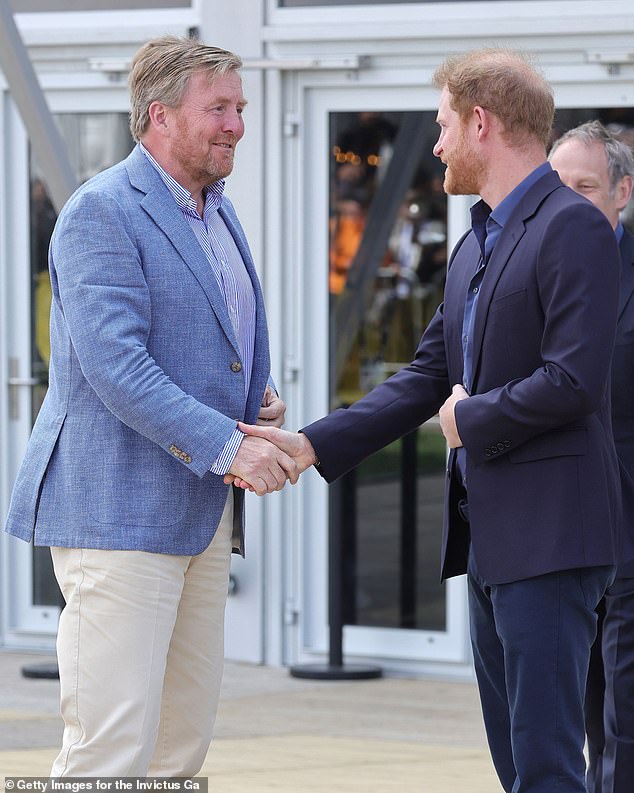 Dapper: The Dutch king looked smart in a linen blazer and beige trousers, while Prince Harry opted for an all navy ensemble

Harry is known to have a historical hatred for the so-called ‘men in grey suits’, the senior courtiers who advise the Queen.

All three royal households were united yesterday in determination not to be dragged into a public slanging match.

They believe it is pointless and undignified and want to help keep lines of communication open with him for his grandmother’s sake.

Charles is said by some to be ‘weary’ of the constant wranglings but buoyed by the fact he got to see his son last week.

Clarence House said it would ‘not be drawn into commenting on a private meeting’ but one source said Charles and Camilla had appeared ‘pleased’ after getting to see Harry and Meghan at Windsor. 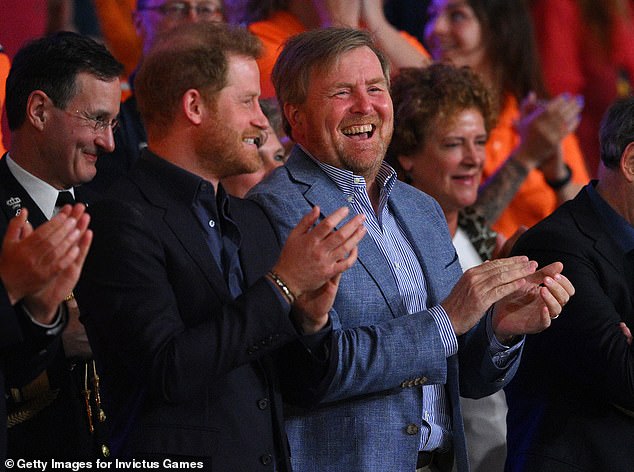 Jovial: King Willem-Alexander who recently flew to the UK for the Duke of Edinburgh’s memorial service, was on typically good form and shared a joke with Harry 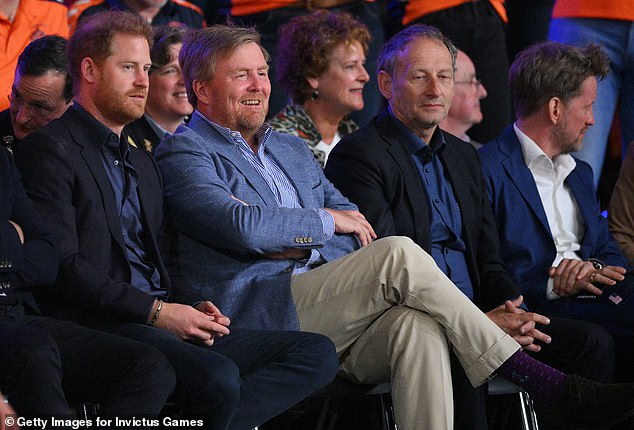 Taking in the action: King Willem-Alexander and Prince Harry sat side-by-side for the wheelchair basketball final

William and Kate were forced to avoid questions on Harry’s comment as they visited the Disasters Emergency Committee (DEC) in London.

As they left, a broadcaster called to William: ‘Sir, does the Queen need protecting?’

The couple did not stop or respond.

William is likely to be irritated at being put in that position as he and his wife were highlighting the generosity of the British people to the DEC Ukraine appeal, which has raised more than £300million so far.

Prince Harry also spoke to People magazine about his mother Princess Diana, saying he hopes ‘everything he does’ makes her proud.

‘In the 12 short years I was lucky enough to have with her, I saw and felt the energy and lift she got from helping others, no matter their background, ailment or status. Her life and theirs was better for it, however short theirs or hers was,’ he said.

‘I honour my mother in everything I do. I am my mother’s son.’

He appeared to issue a veiled warning to those closest to the Queen when interviewed by a US network, saying he wanted to make sure his grandmother was ‘protected’ and had ‘the right people around her’.

The duke did not elaborate on whether he was referring to royal aides or members of his own family, but his comments may have deepened his rift with his father the Prince of Wales and his brother William and perplexed palace officials.

Harry also risked further fuelling the rift with his estranged older brother by stating that their late mother, Diana, Princess of Wales, was now watching over him from beyond the grave as ‘she’s done her bit’ with Prince William and his family.